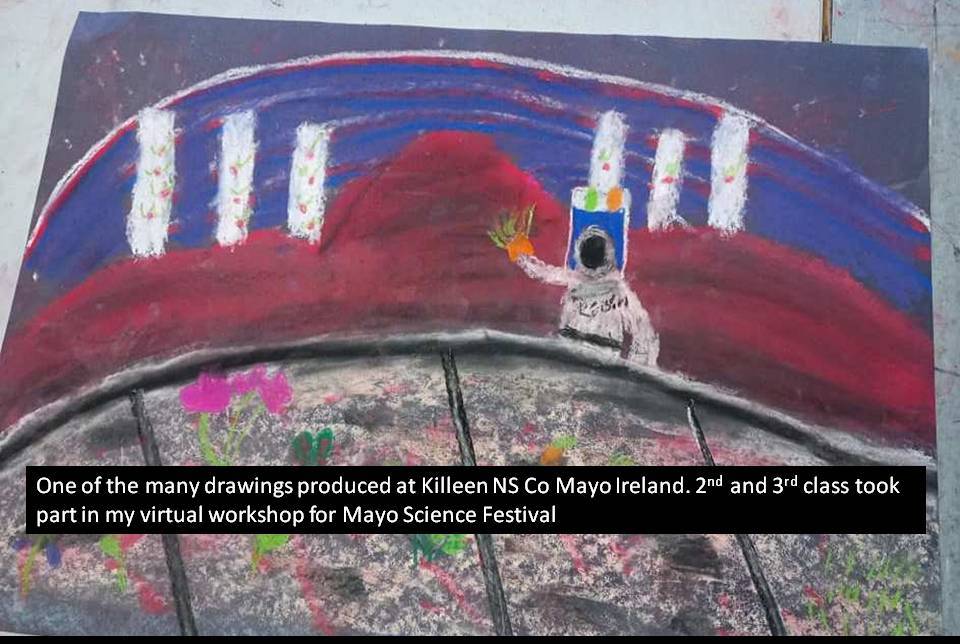 Being a child of Apollo, I am naturally drawn to the possibilities of the Artemis mission to the Moon, Mars and Beyond. Acccordingly my Science Festival offering this year was called Space Exploration Creating our Future. A slight deviation from the central theme Creating our Future.

For some time, I have been following developments in food growing on the ISS. This is of course in preparation for a more sustainable food programme on the moon and mars. I am also acutely aware of the growth in hydroponic farming here on Earth. In fact, I enjoy lettuce with roots still attached from a local supermarket. Popping it in a glass of water allows you to take some leaves while the remaining leaves remain fresh for days.

Hydroponics ticks a lot of boxes for growing vegetables on Earth and in space. No soil is needed, and the growing units can be vertical, yielding many times more produce in a small area. Fewer pesticides. No sunshine is required.

I am fascinated by Nasa’s veggie on the ISS and their work toward creating greenhouses for the moon and mars.

Mars habitation may be several decades or more away. Moon living may in fact be a reality sooner. Even if it is just a space station in orbit around the moon involving movement to and fro between the station and the surface.

All of this exploration is inevitable because it is human nature to explore. Therefore the more comforts we can offer solar system astronauts, the better the story will unfold.

Hopefully, the development of space food growing will benefit humans on Earth. In general, space technology has been helpful to everyone as innovative development in many areas filters down to the public. For example the United Nations are already involved in hydroponics in relation to countries where water is scarce.

I decided to make a drawing video that merges Artemis, ISS, food technology, living in space, vegetables and mars in general. A leap into the future while learning about the present. Learning by doing, absorbing information by drawing the subject. The chances are high this fantasy will become a reality in the lifetimes of 8,9, and 10-year olds.

We start by drawing a mountain on mars and the martian atmosphere. Just to set the scene and learn about the difficulties of living there. I can tell by their drawings that significant efforts were made with the mountain landscape and sky. Terrific efforts were made in the drawing of the grow boxes full of fresh vegetables. And the vertical hydroponic towers.

For a few groups, I did the workshop via a zoom presentation followed by a modified video. Mostly the workshops ran from the stand-alone video.

Several schools took part in the science festival with multiple classes and age groups. I was indeed delighted with the feedback and the works produced. These kinds of remote engagements requires significant and warm inputs from the teachers in the room. My applause goes to the teachers and the children for their support and excellent drawings.