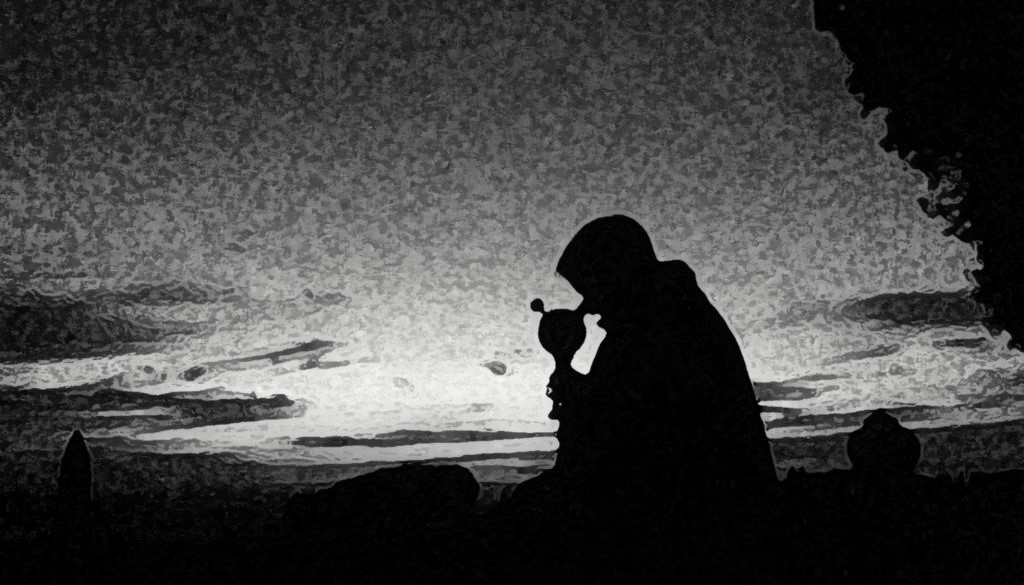 And then I wrote… Back in 2014 I was made the president of the Foundation, and called on my friend Bob Trembley to help out with our web page. (What happened was that I mentioned out loud what I wanted to do, and Bob said, “You realize I do that for a living?”) As part of the deal I agreed to write an article for the Warren [Michigan] Astronomical Society’s newsletter, which he edited. I’ve lost track of when it was published — Bob can chase this down if he wants — but I do have a copy of what I sent them. Since this was written, the IAU has renamed a number of stars both for clarity and to represent a wider range of cultural star names; I note the new names here next to the ones we used back in 2014. 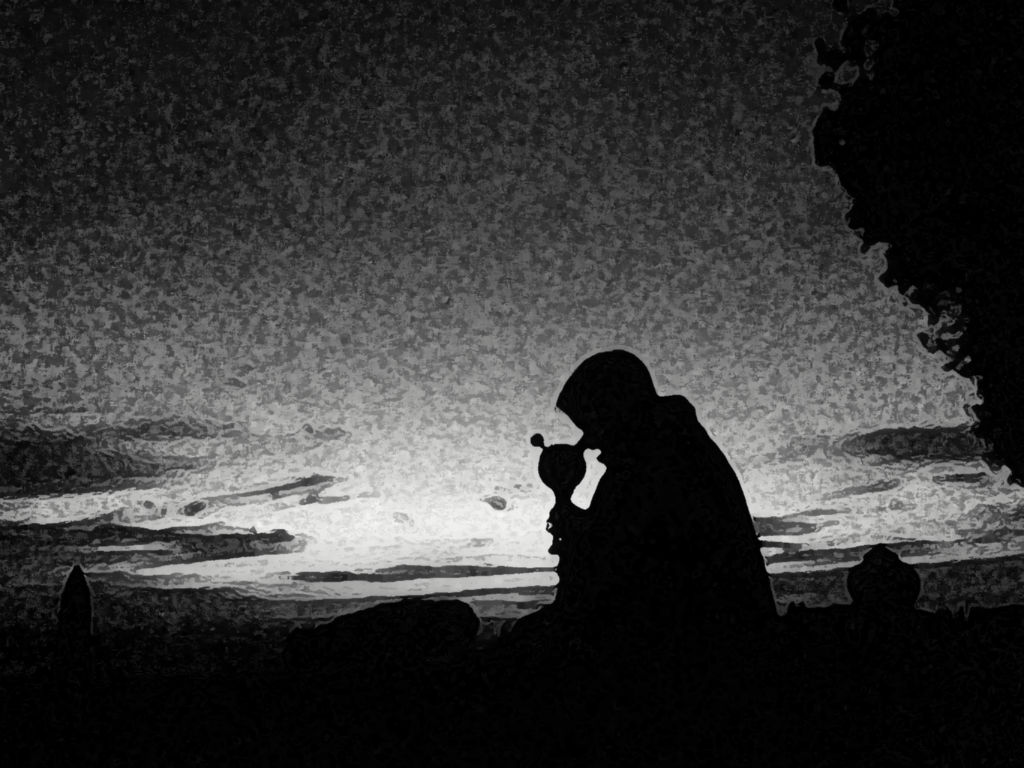 Dan Davis using my Celestron C-90 telescope at sunset, while working on Turn Left at Orion

When Cambridge University Press invited my coauthor Dan Davis and me to revise Turn Left at Orion, our handbook for finding night sky objects in a home telescope, they agreed to give us more pages – and bigger pages – to include objects that can be seen with a Dobsonian telescope. Up to then, most of my (non-professional) observing had been with a vintage Celestron C-90, and moving up from 3 inches to 8 inches of aperture gave me a whole new look on the sky.

What I would like to talk about here are six deep sky objects that were unexpected delights to me… things I had never bothered to look for, before, but which the extra aperture has shown me were well worth the effort. I choose six because we now divide the book into six sections… one for each season, plus the two circumpolar regions.

Surprise 1. For (northern hemisphere) winter, there are so many wonderful objects, from the brilliant Orion nebula to the faint but famous Crab Nebula, that I really didn’t expect to find anything new. But I have fallen in love with the globular cluster M79 in Lepus, which is remarkably easy to find and see, and remarkable as well as an astronomical object. 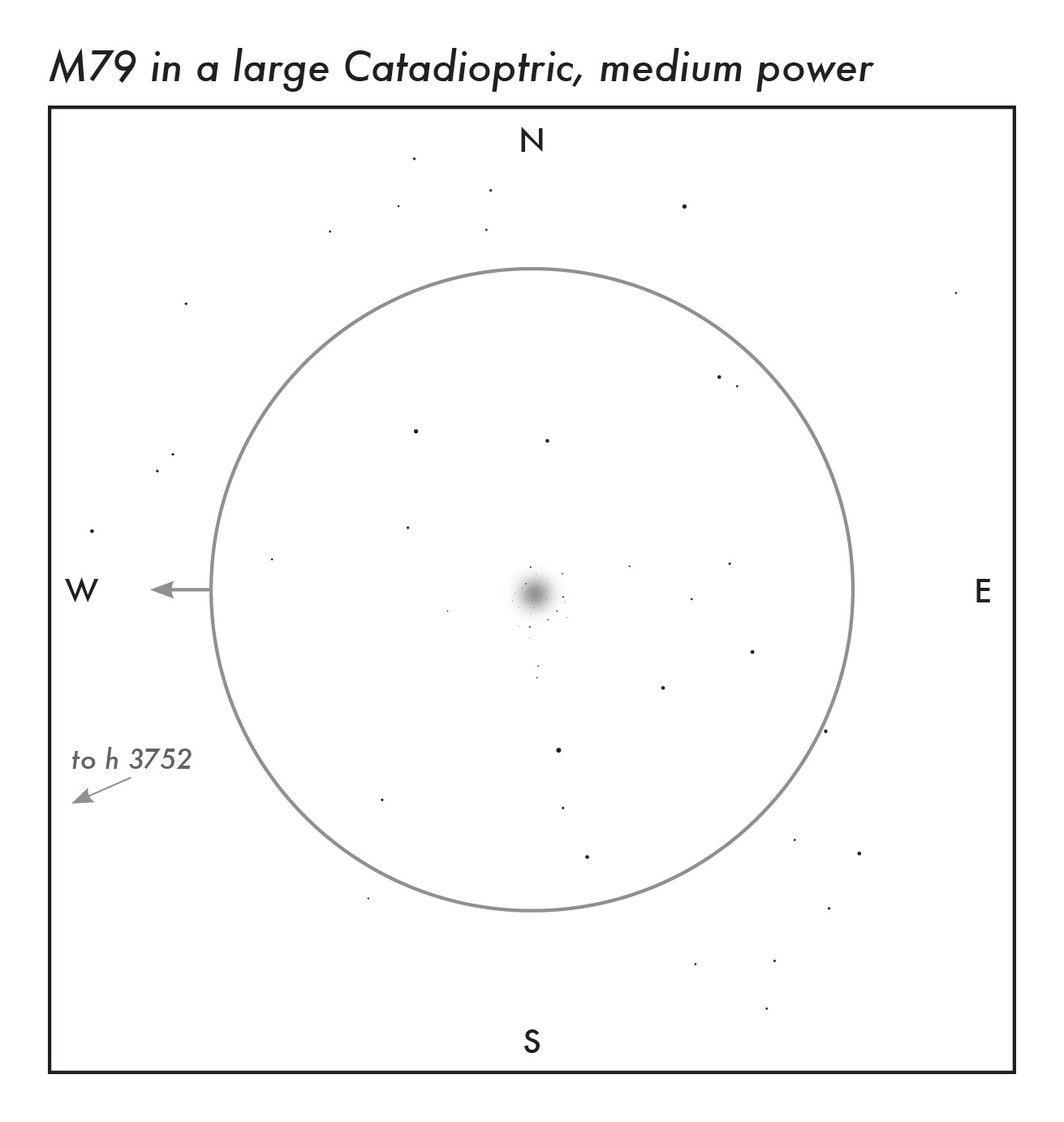 Here’s what M79 looked like to us, as seen in an 8 inch catadioptric telescope

Finding it is almost trivial, if you have a good southern horizon. Wait until Orion is at its highest, and look due south for two second magnitude stars that are in a roughly north-south line. Step from the northern down to the southern of that pair, and one step further (and a bit to the east) puts you in the neighborhood of M79. The surprise is that there is any globular cluster at all visible during this time of year; usually they are found closer to the galactic center (near Sagittarius, in the summer sky). One theory is that this body is really the core of a captured galaxy.

Surprise 2. My favorite springtime surprise is The Ghost of Jupiter, a planetary nebula in Hydra designated NGC 3242. To be honest, it’s not much to look at; the fun in in the finding. This object is due south of Leo, in a really obscure part of the sky that I had never bothered looking through before. 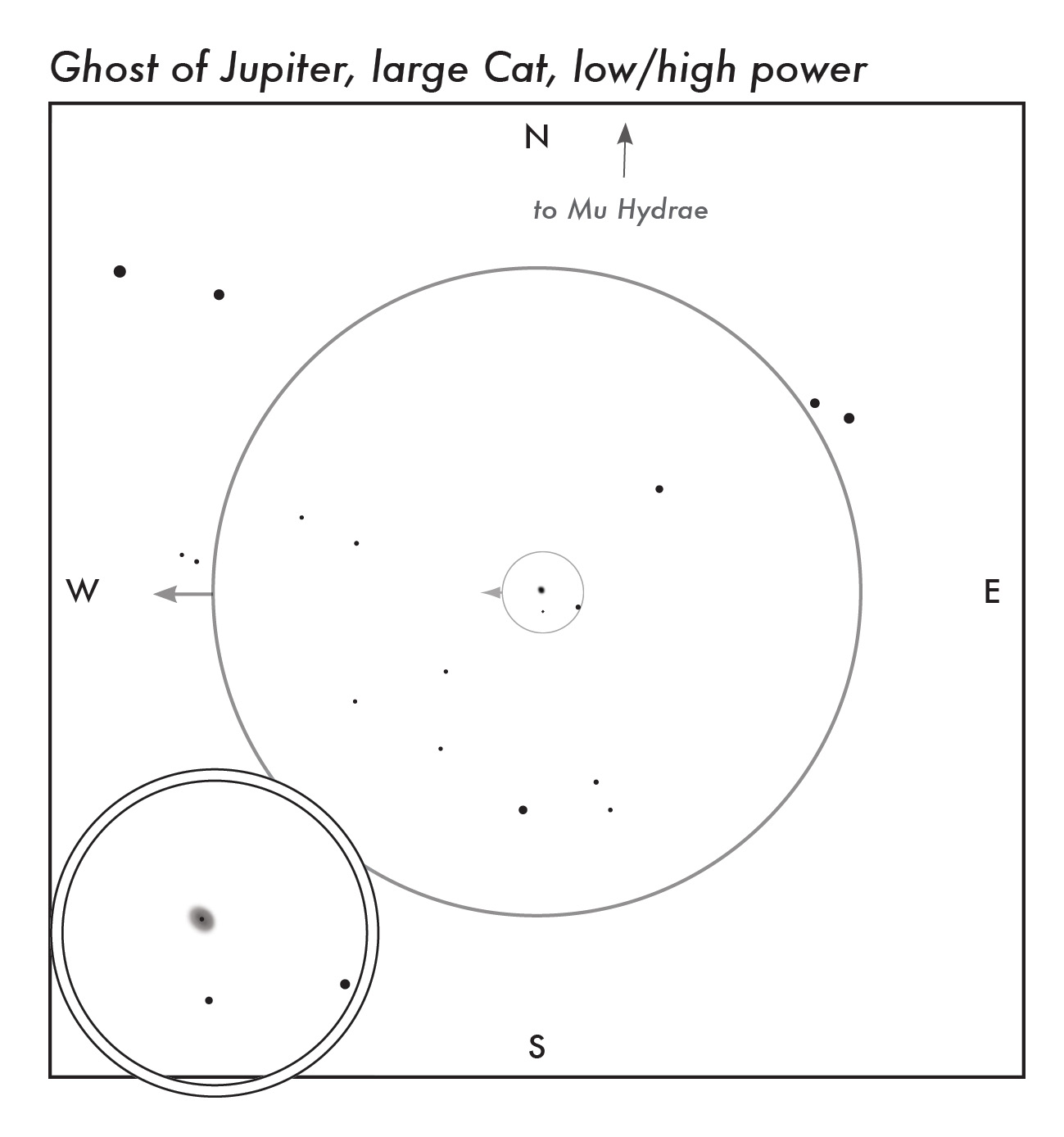 Here’s what the Ghost of Jupiter looked like to us, as seen in an 8 inch catadioptric

Look south of Regulus for a solitary second magnitude star, Alphard; aways to the east are the four third magnitude stars of Corvus, the Crow. Halfway between are a line of three third magnitude stars. Find the westernmost of those (Mu Hydrae) and search to its south for a faint blue-green disk. It’s slightly flattened, reminiscent of the flattening seen in Jupiter, hence its name.

Surprise 3. The summertime sky around Scorpius is full of well-known favorites; my surprise here was finding a number of double stars as well. Most observers know Graffias [now called Acrab], the double star at the top of the Scorpion’s “claw” (the three stars running north to south, to the right of Antares).

But less known is Nu Scorpii [a.k.a. Jabbah], a little fourth-magnitude star about a couple of degrees to the east (and a bit north) of Graffias. In a Dobsonian you can split this guy into a nice double-double. The main star is a pair of magnitude 4.4 and 5.3, with only a 1.3” separation, while in the same field you’ll find another pair, magnitude 6.6 and 7.1 separated by 2.3”.

Surprise 4. The autumn sky is notoriously underpopulated for small telescopes; once you get past the Andromeda galaxy, what’s to see? The answer is a group of two galaxies and a globular, NGCs 247, 253, and 288, all within easy reach of each other.

Start at Fomalhaut and look to the northeast for a solitary second magnitude star, Deneb Kaitos [now called Diphda], in an otherwise empty part of the sky. Center your finder on that, and move south. Once Kaitos is about to leave your finder field, start looking for the faint disk of the galaxy NGC 247. Another full finder scope field south is a second (and easier) galaxy, NGC 253. From there, half a finder field to the southeast is the globular, NGC 288. Finding such treasures in an obscure part of the sky is the sort of challenge I love.

Surprise 5: Around the northern celestial pole, a group of stars in Cepheus about halfway between Cassiopeia and Deneb have shown me two different kinds of fun. Start at Zeta Cephei, a third magnitude star almost exactly halfway between Deneb and the westernmost star of Cassiopeia. (Not to be confused with a slightly brighter star, Alderamin, to its north.) From Zeta, move due east and you’ll see another third magnitude star, Delta Cephei. 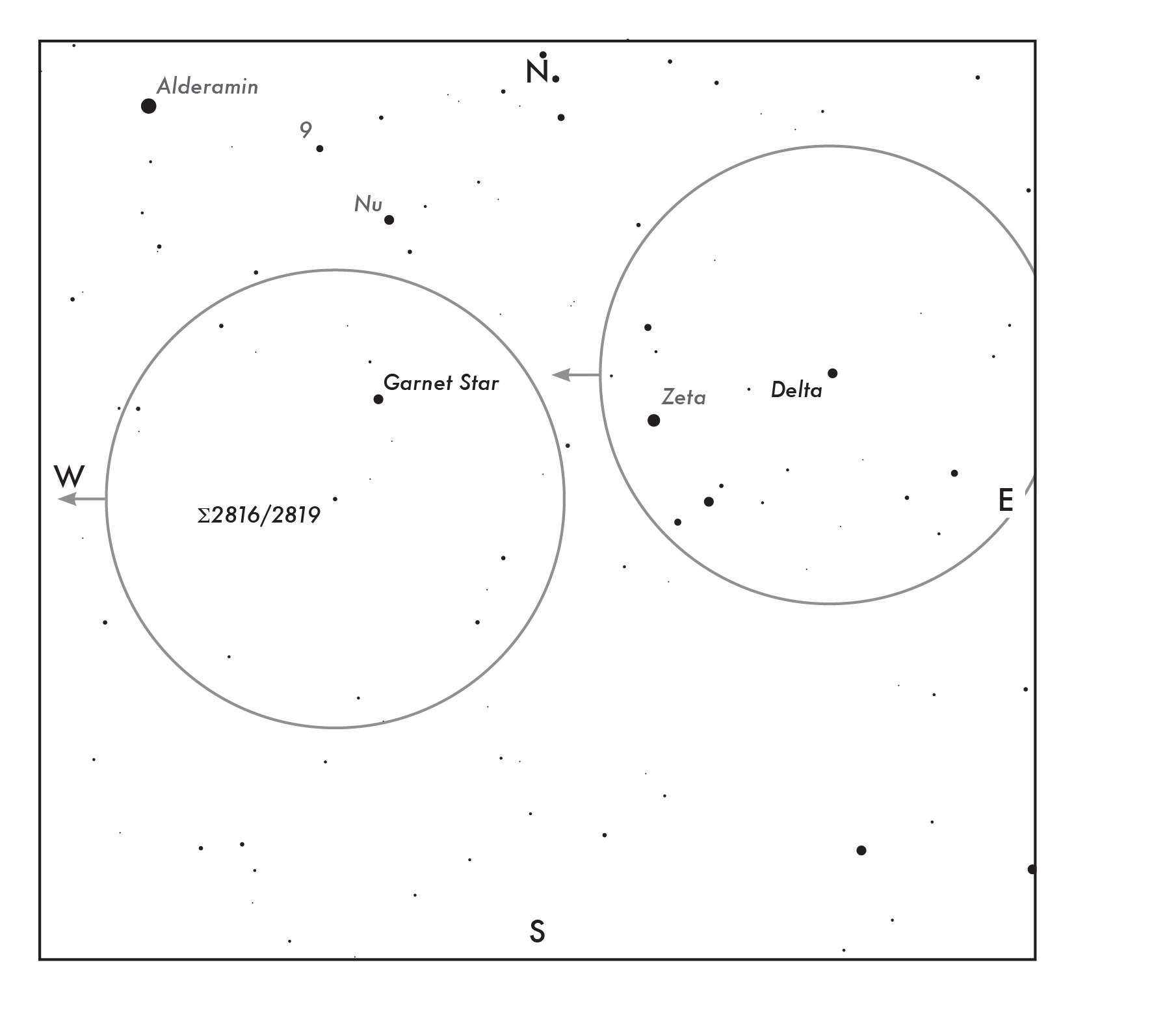 This is an easy double; but beware, the primary is a variable, changing from third to fourth magnitude with a five day period. In fact it is not just a variable, but THE variable — the type from which the whole class of Cepheid variables are named. (Ask your local cosmologist why Cepheid variables are so important.) But even more fun is to go back to Zeta, and then look in your finderscope (or a good set of binoculars) due west for a lovely red third magnitude star, The Garnet Star.

Surprise 6: Ok, this one is a cheat; you won’t see it from Michigan. But if you ever get a chance to go south of the equator, bring your small telescope. There are some incredible objects to see around the southern celestial pole, including the justly famous globular clusters Omega Centauri and 47 Tucanae. The surprise to me was another globular, however, NGC 6752, in a pretty obscure part of the southern sky near the Peacock star. I won’t bother giving finding instructions here; I’ll just mention that it rivals M13 and M22, and would be far more famous if only it didn’t have to compete for attention with its more gaudy southern neighbors! 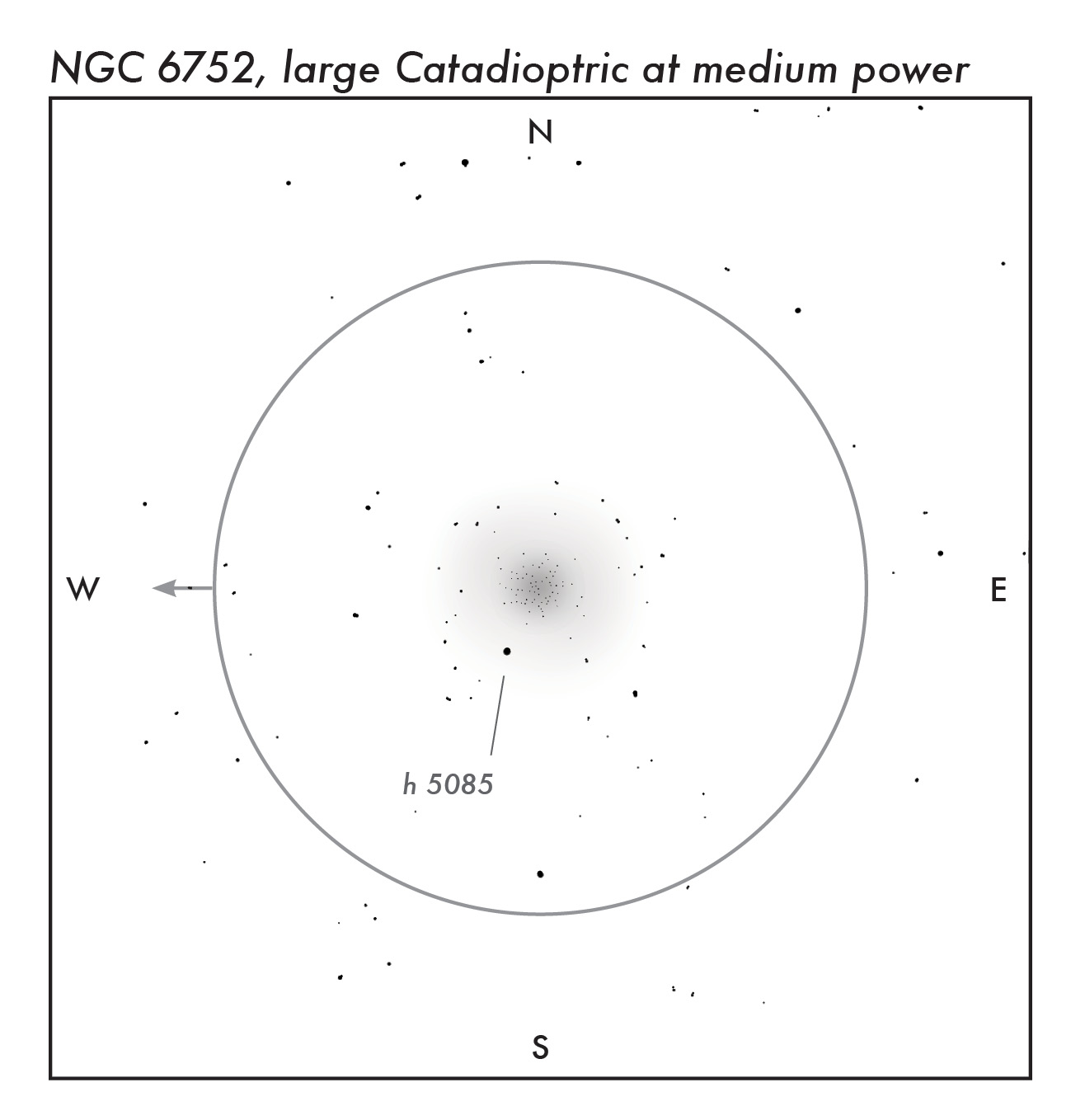