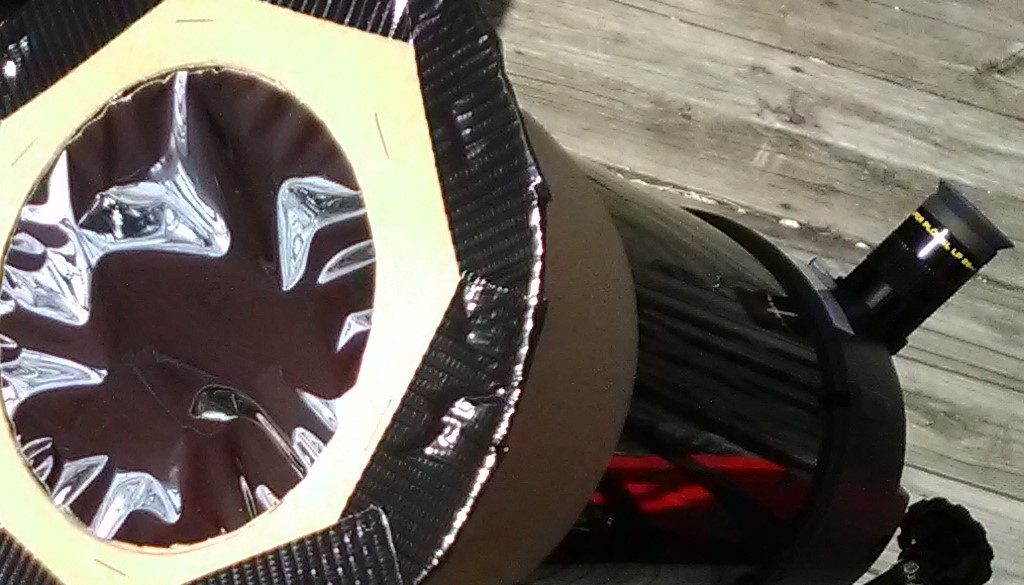 There is a problem in astronomy: it looks as though it costs too much.

You do not need a $5000 telescope to do astronomy.  You do not need an expensive camera.  You really do not need much—especially in today’s world of cheap electronics.  Last year I ran a piece here at VaticanObservatory.org about taking astro-photos of the moon and stars and even some planets, all with a smartphone that I bought at a grocery store for $10, almost ten years ago.  That is right, a ten-year-old, ten buck phone (click here for that post). All the photos in this post were taken with this camera.

Well, how about sun photos?  The images (and videos!) below are taken with the Ten Buck Wonder (TBW).  I used two telescopes with the TBW.

One telescope is a small set-up I scrounged together from cast-off stuff—a tripod from one old telescope, the tube from another.  The tripod is probably 5 years old; the telescope tube (which I mated to the tripod using a piece of wood) is perhaps 20 years old.  Then I made a solar filter from a piece of material used in making safe “eclipse glasses”, some cardboard, some staples, and some “duct tape”.

The “scrounge-O-scope” revealed some sunspots nicely.  The TBW captured the sunspots, too, although they look better to the eye than they do to this camera.  The sunspots are arrowed in the still image (below), with an image from NASA’s Solar Dynamics Observatory for comparison.  Any decent telescope (and you can buy new, decent telescopes for under $150; used ones for less) will produce the images seen here.

The video of the sunspots looks better than the still photos, in my opinion—but of course you have to put up with the motion (for both the stills and the video I just held the TBW up to the eyepiece).  Look carefully in the video for those same sunspots seen in the still image.  The spots are more fleeting in the video, but when they do appear they are clearer, and look more like they do to the eye.

The other telescope is not so cheap.  It is a “Hydrogen-alpha” telescope I borrowed.  It is on the same tripod as the “scrounge-O-scope”, but any “H-alpha” telescope is pricey.  H-alpha telescopes only allow in a certain (very red) wavelength of light emitted by Hydrogen gas—they block out all other light that the sun produces simply by virtue of being incandescently hot.  For this reason, H-alpha telescopes reveal the gaseous “prominences” and other structures that plain “eclipse glasses” filters (which just cut down on the light from the sun, like super sunglasses) do not.

The video is variable.  At one moment nothing is visible, and then at another moment a good bit of detail appears (watch the edges of the sun to see the prominences).  The TBW can’t properly adjust to the image and stay adjusted.

In the cases of both the ordinary filter and the H-alpha filter, the TBW was able to capture much of what is visible in images from NASA or Big Bear.  That is not too bad for an old, $10 smartphone camera, just held up to the eyepiece.  I hope to get better at using the TBW, and to put some more photos up—astronomy you can afford!

Hey, affordability matters.  When I was teaching at Jefferson Community & Technical College (JCTC) in Louisville, I would give my astronomy students an assignment to get an issue of astronomy magazine like Sky & Telescope or Astronomy (yes, a real, print issue) and review it.  Part of that review was to look over the advertisements in the magazine, and to select two advertisements that interested the student.  The student then wrote a short discussion of each, including why the student selected that advertisement, and what the student learned from it.

The students were always impressed by the money involved in whatever was being advertised.  JCTC students usually did not have money.  They were also young, and ethnically and racially diverse.  The World of Astronomy is always bewailing how there is not enough diversity in astronomy—not enough people like my students looking through a telescope.  Well, maybe that world should focus on cheaper astronomy!  Astronomy does not have to cost too much.