One of those things is that, while in the northern hemisphere the solstice is indeed the shortest day of the year, early December marks the “darkest evening” of the year. That’s right, the earliest sunset occurs right when this blog post appeared: about December 4. After that date the sun starts setting later each night. Indeed, as the graph below shows, by the time of the solstice there will be several minutes more daylight in the evening than there are right now in early December. (All data in these posts are based on sunrise and sunset times provided by the U.S. Naval Observatory.) 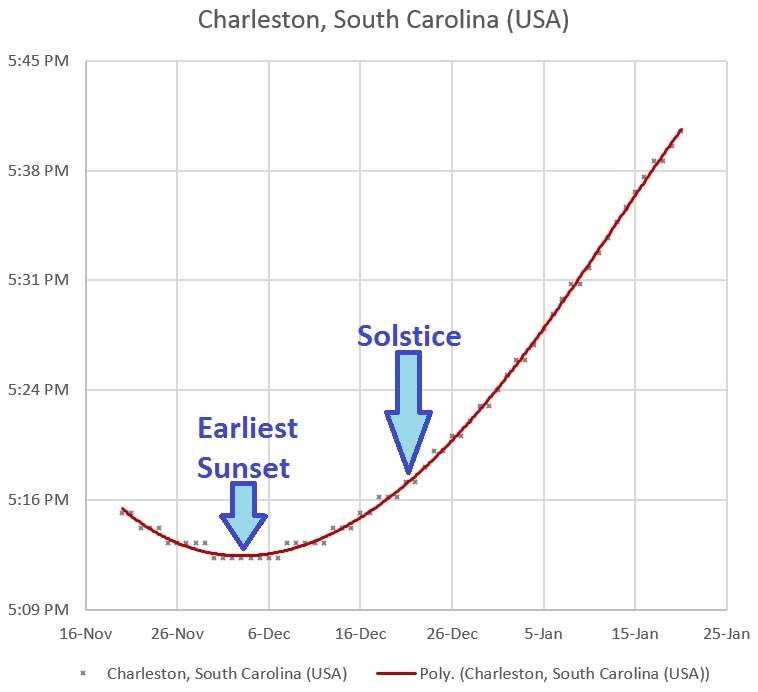 Plot of sunset time (from the U.S. Naval Observatory) vs. date for Charleston, South Carolina, USA. Note that a plot like this will differ for different northern hemisphere cities depending on their latitudes, but the general plot characteristics will be the same.

Likewise, in the southern hemisphere the solstice is indeed the longest day of the year, but the brightest morning of the year is in early December. By the time the solstice arrives there will be several minutes less of morning daylight than there are right now. 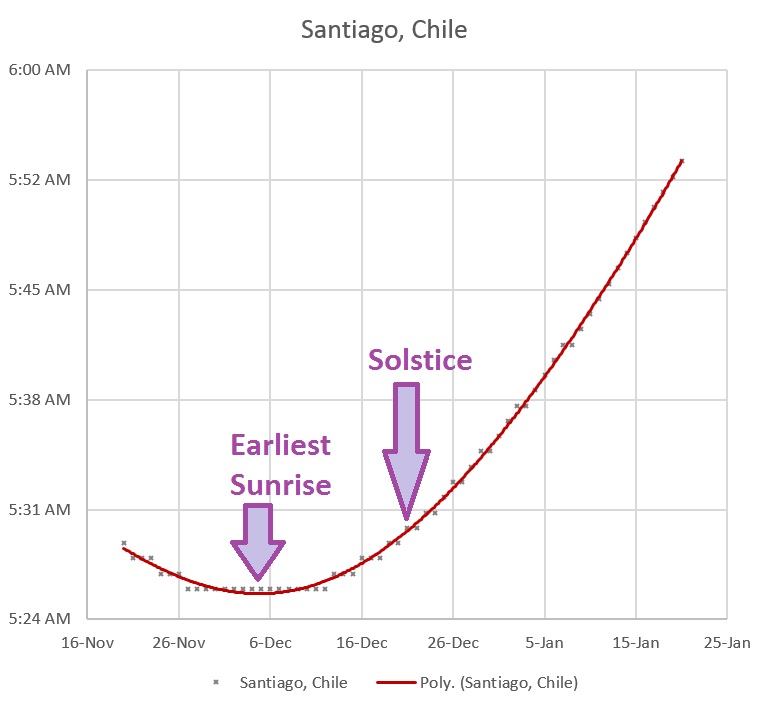 Plot of sunrise time (from the U.S. Naval Observatory) vs. date for Santiago, Chile. Note that a plot like this will differ for different southern hemisphere cities depending on their latitudes, but the general plot characteristics will be the same.

We will get to the explanation for all this in a future post. For now, just observe it. See for yourself that it is true. Keep your eye on the sunset (if you dwell in the northern hemisphere) or on the sunrise (if you dwell in the southern hemisphere). Watch the evening brighten, northerners, even as the shortest day approaches. Watch the morning darken, southerners, even as the longest day approaches. The universe holds surprises for those who are attentive to it.

Stay tuned for more on the solstice in a future post!

2  |  The Solstice and the Daylight in Charleston and Santiago: Part IV — Early January

4  |  The Solstice and the Daylight in Charleston and Santiago: Part II — The December Solstice