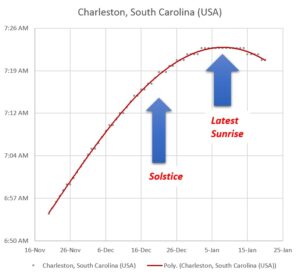 Plot of sunrise time (from the U.S. Naval Observatory) vs. date for Charleston, South Carolina, USA.  Click image to enlarge.  Note that a plot like this will differ for different northern hemisphere cities, depending on their latitudes (the effects shown here generally being more pronounced for cities farther from the equator), but the general plot characteristics will be the same.

In the northern hemisphere the mornings are darkest now, in early January; now is when the latest sunrise occurs.  Likewise, in the southern hemisphere the latest sunset, and thus the brightest evening, occurs now.  As discussed in the previous post, this is because the earth is near perihelion in its orbit.  Its orbital motion is faster than usual, causing the period of daylight to drift backwards (that is, later) against the clock, brightening the evenings and darkening the mornings.

Between when the solstice occurred and now this perihelion drift had been winning out over the changing length of daylight itself, but that is now coming to an end.  From now forward through early June, northern hemisphere dwellers will see the days growing longer, and both the mornings and evenings growing brighter; southern hemisphere dwellers will see just the reverse on all accounts—shortening days, darkening mornings, darkening evenings. 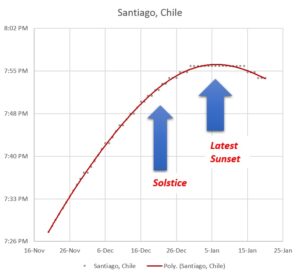 Plot of sunset time (from the U.S. Naval Observatory) vs. date for Santiago, Chile.  Click image to enlarge.  Note that a plot like this will differ for different southern hemisphere cities, depending on their latitudes (the effects shown here generally being more pronounced for cities farther from the equator), but the general plot characteristics will be the same.

One final note:  I learned about the solstice and the daylight not through a study of astronomy; rather I learned about it firsthand when my son started taking a bus to school.  The bus came at a set time in the morning.  At the start of the school year (in late August), my son caught that morning bus in broad daylight.  As the semester progressed the mornings grew darker.  By December it was dark and gloomy when my son caught that bus.  I knew the days would grow longer after the December solstice, so I assumed that when Christmas break ended in January we would see brighter mornings.  I was wrong!  And disappointed.  When school resumed after New Year’s, the mornings were darker than ever.  Not until February did the mornings start to brighten appreciably, yet it was obvious well before then that the evenings had brightened a lot.  Trying to understand why in January my son was standing in the dark when waiting for his morning bus is what led me to investigate and understand the solstice and the daylight.

The universe indeed holds surprises for those who are attentive to it.  Many of these surprises require no advanced degrees or Advanced Technology Telescopes or other specialized knowledge or equipment.  Sometimes, all they require is a regular bus ride.

3  |  The Solstice and the Daylight in Charleston and Santiago: Part I — Early December

4  |  The Solstice and the Daylight in Charleston and Santiago: Part II — The December Solstice