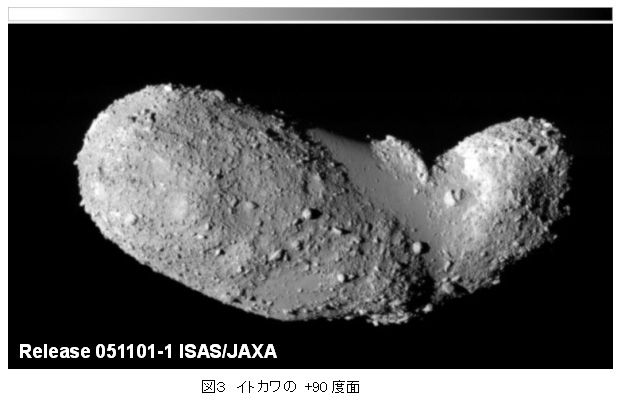 This column first appeared in The Tablet in October, 2004; it ran here at The Catholic Astronomer in 2015

Typhoon 23 and I arrived in Japan on the same day. My mission (I can’t speak for the typhoon) was to attend an international workshop on sample returns from asteroids. Our hosts were the  scientists and engineers of  the Japan Aerospace Exploration Agency who are eagerly awaiting the arrival next summer of their spacecraft, Hayabusa, at asteroid Itokawa. (The remarkable challenges and eventually successes of Hayabusa can are described nicely at its Wikipedia site.)

Astronomers usually have to be content with observing their objects from afar. But nothing beats actually going to a place to see what it’s really like.

Itokawa is a potato-shaped lump of rock less than half a kilometer in diameter that apparently drifted into our neighborhood from the asteroid belt; though it looks like a typical asteroid, its orbit is not out beyond Mars but rather much closer to home, crossing the Earth’s orbit nearly once a year. (It’s one of those asteroids we keep an eye on for fear that some day it could collide with us; no such collision is in the cards for the immediate future, however.) Through a telescope, we have reason to believe that its composition is probably not all that different from the meteorites in our collection that we classify as “type LL ordinary chondrites”. But observing from a distance can be deceiving.

An alien orbiting Earth would recognize few obvious differences between Japan and Britain. Both are heavily industrialized island nations whose cities fill the nighttime sky with artificial light. Indeed, the view from my hotel window would only confirm this guess: the cars drive on the left, and the neon signs advertise McDonald’s, Tower Records, and Starbucks. It’s only walking the streets, buying a burger from the remarkably polite salespeople, that you can finally see how different the countries really are.

In the same way, Hayabusa will get very close indeed to its asteroid. Not only will it sit a mere 10 km away, taking multicolored images as it matches Itokawa’s orbit around the Sun; after three months it will actually come to touch the surface. A small pod will be dropped on the surface to bounce around the asteroid, protected by its small gravity, taking pictures and temperature measurements and sending them back to Earth, And then, from the main spacecraft itself, a projectile will be shot into the surface, splashing dust and rock fragments into a collecting horn. After two such visits, the spacecraft will leave Itokawa and bring its souvenirs back home to Earth. It’s slated to land its sample pod in the Australian desert in 2007. (In fact, it didn’t get its sample back until 2010. Turns out, it really was LL chondrite material!)

It’s a beautifully conceived and elegantly built mission. And it’s all the more impressive for being the product of a nation much smaller than the US, or Russia, or the consortium of countries making up the European Space Agency. This workshop is both an invitation to the rest of the world to share our asteroid expertise with the Japanese, and to give them a well-deserved opportunity to brag a bit.

Indeed, bragging rights are the main benefit that the Japanese government will get for its investment of money and human resources. That’s a very practical benefit for a nation whose economy is based on the export of high-tech consumer products; the prestige of a successful space mission will maintain the high technical reputation of all its products. (If you think about it, that’s not all that different from why the Church publicizes its saints.)

That justifies the money. The justification for the individual human effort is another matter. All of these Japanese scientists and engineers would make a lot more money working for Panasonic. Obviously that’s not what motivates them.

Francis Spufford, in his recent book Backroom Boys: The Secret Return of the British Boffin, describes the world of the research scientist as an example of a gift economy: one’s status is not based on how much you have accumulated for yourself, but by how much you have given — in scientific papers, in the opportunity to satisfy (if not sate) our human curiosity — to the rest of the community. The Japanese understand the role of gifts. This mission, this meeting, is their way of increasing their status in the scientific world.

But even underlying that sense of status is a deeper humility in the face of creation. The gift is only as useful as it is considered valuable. And to the scientists at this meeting, from cultures all over the world, the value comes in getting to actually taste a piece of the world bigger than ourselves. The data from this mission will confirm, or destroy, some of our favorite theories about how asteroids are put together. In the process it will inevitably inspire new questions; we’ll want to go back.

We also want to leave a bit of ourselves. As part of the project to publicize the mission, the Japanese space agency invited people to list their names in microscopic print on a thin plate to be left on the asteroid. Nearly 900,000 names were collected.

Dr. Kawaguchi, the Hayabusa project manager, told us that his team would make “every effort to bring out spacecraft safely to the asteroid and back. I only hope you will be just as successful getting back to your hotels tonight.” Outside, the rain and wind is increasing; the typhoon is approaching. For all our status and technical ability, nature is still much larger than we are.

(After submitting this column, I stayed on in Japan for another few days… long enough to experience the Chuetsu earthquake on October 23. At magnitude 6.8, it resulted in 39 deaths, 3,000 injured, and the first-ever derailment of a bullet train due to earthquakes. I felt the quake while sitting in the chapel of the Jesuit residence at Sophia University in Tokyo… a building made of wood that had survived the great Tokyo earthquake of 1923 by being flexible to shake. A lot. As I experienced.)