“Space: the final frontier. ” The opening line of the famous quote from Star Trek, the missions aim ” to boldly go where no man (or woman) has gone before. ”

During Spaceweek 2016 I had the opportunity to take 360 children and their teachers on an exploration of moons in our solar system and the very topical planet Mars . Through listening and drawing they experienced a small awakening to the robotic images which are unveiling the beauty of other worlds, increasing our understanding with every single pixel. 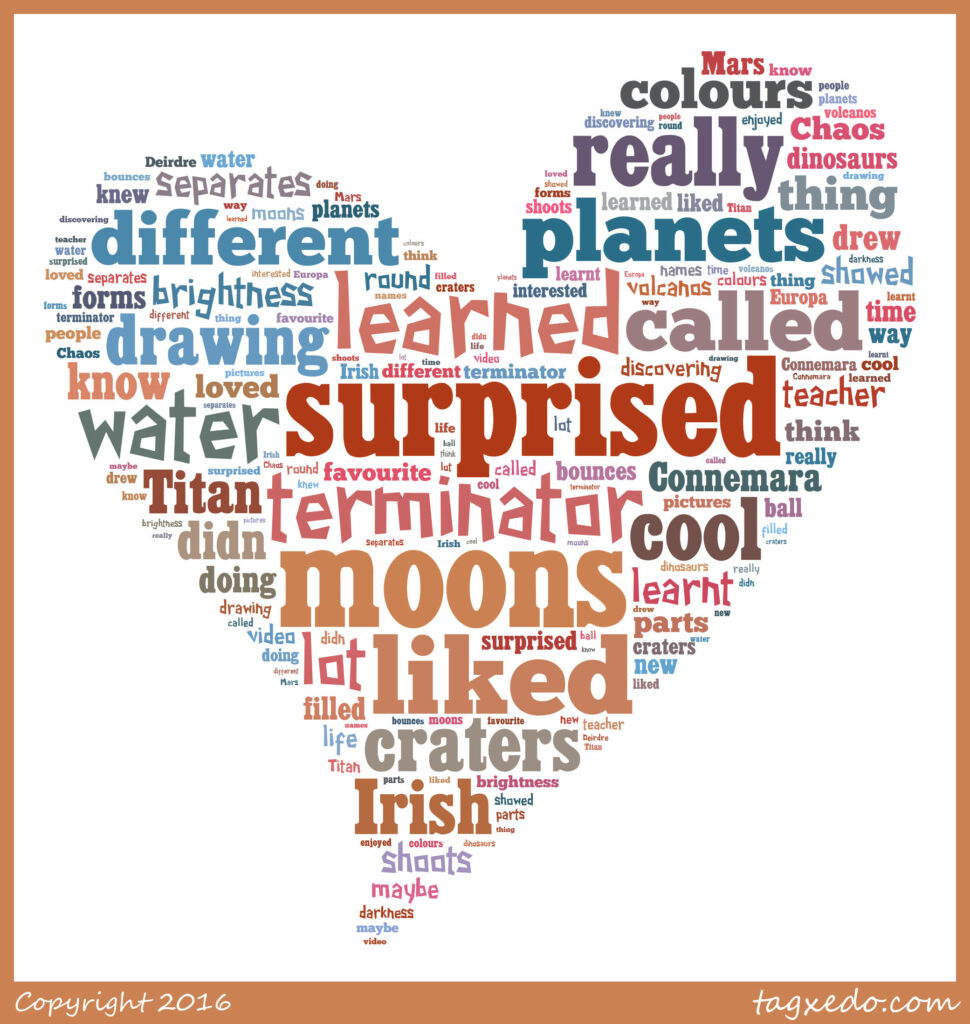 In order to make my workshop Marvellous Mars extra interesting for the groups I made a model of Mars out of a polystyrene ball. Carved out Vallis Marineris added Olympic Mons and other features. It’s great to be able to bring the planet into the room. The children in the main have never seen Mars and know little about it,so the model helps grab and hold their attention.

Marvellous Mars is similar to Deadly Moons except there are so many missions ongoing and pending it makes it very exciting. The workshops are a vehicle for learning through drawing plus a way to engage the kids in the latest missions, their technologies and innovations. During Spaceweek I was delighted to be able to talk about ExoMars and share NASA and ESA’S plans for future adventures too both Mars and the Moon which are due to truly go where few have gone before be they people or robots.

While most of my workshops occurred in schools and libraries I was delighted to deal with some very large groups at Axis Arts Centre in Ballymun Dublin. The theatre setting allowed 15 foot high moons tower above the children who were drawing on the floor. Many of the teachers attending were going to continue the learning via classroom project work stimulating the children to write about the moons and think about them afterwards.

For me it is always important to try to link my presentation before the drawing section to current space events. With ExoMars about to land Schiaparelli EDM ( Entry decent and landing demonstrator) on Mars and place the Trace Gas Orbiter in situ around the planet it makes it topical. As this achievement will no doubt be in the media that will offer opportunities to keep the kids attention after the workshop thereby extending their learning. In the coming week I will be updating Marvellous Mars with some of the latest releases of images from HiRise a camera on the Mars Reconnaissance Obiter. (Latest images from HiRise one of the best cameras in space.)

Space exploration is not a fantasy, it’s very now with so much to offer. I constantly tell children that the space business can only get more interesting. I leave them with thoughts that perhaps if they really want it they could consider a working life in the many supporting industries. The frontier is opening up in ways that are so well captured in the new set of NASA posters free to download. NASA Mars Explorers Posters I use them in my Marvellous Mars presentation to kick off the concept of farming in space and teaching in space. All the tasks and efforts to keep us alive in space are expressed in the posters. Over the coming decades living and working in space will see a massive jump forward, young people need to be aware of the fact that space exploration begins on the ground . ESA and ROSCOMOS (Roscosmos State Corporation for Space Activities ) collaborating on ExoMars. NASA’s forthcoming InSight mission all pushing the boundaries of knowledge for all mankind. Boldly and bravely going forward and hopefully bringing humanity closer to a more civilised world here on Earth as we reach out to explore deeper into our solar system and beyond.
A small selection of images from my Space Week are in the slide show below.

2  |  Exploring the Solar System: The Mass of the Sun

4  |  Get ready the Perseids are coming