Since its founding in 1891, many people have passed through the doors of the Vatican Observatory.  A quick perusal of our guestbook reveals several Names, including Popes, Nobel laureates, astronauts, actors, and saints. Today’s guestbook entry is from April 18, 1923, when Thomas Espin and William Milburn made a visit. 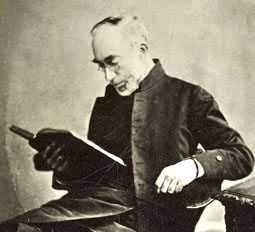 He was an Anglican minister and avid astronomer who established an observatory at Wolsingham in 1885. The observatory was transferred to Tow Law when he became curate there in 1888.

His scientific work involved surveying the skies and cataloging variable and double stars.  He surveyed every star below 9th magnitude, which numbered more than 100,000. He discovered thousands of double stars. He was a member of the IAU commission on double stars.

He invented several astronomical instruments, including a variable eyepiece and a method for making illuminated markings in the eyepiece of large telescopes.

In politics, he was county magistrate from 1891-1926 and the Chairman of the Stanhope and Wolsingham Petty Sessions..

There is a crater on the Moon that bears the name Espin.

Espin was accompanied on his visit by his assistant William Milburn (1896-1982), who wrote, “Wolshingham Observatory, Tow Law, Durham, England.”