Since its founding in 1891, many people have passed through the doors of the Vatican Observatory.  A quick perusal of our guestbook reveals several Names, including Popes, nobel laureates, astronauts, actors, and saints. Today’s guestbook entry is from August 31, 1913, when Edward Pickering made a visit. 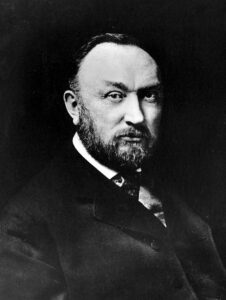 Pickering made significant advances in stellar spectroscopy. Building on early work by Fr. Angelo Secchi, he and his team of astronomers and computers (including Annie Jump Cannon) developed the Harvard Stellar Classification scheme that is still widely used today. (This is the “O.B.A.F.G.K.M.” sequence that you may have had to memorize if you ever took an introductory astronomy course.)

The team produced the Henry Draper Catalog, a stellar catalog with spectroscopic classifications for more than 200,000 stars.

Pickering also discovered the first spectroscopic binary stars. These are binaries that are not resolved in the telescope (that is, you cannot see them as two separate stars) but when you study the spectrum of the system it is evident that there are two different stars present.

Pickering was also the first to observe a new series of absorption lines in stellar spectra, known as the Pickering-Fowler series. Though he thought the series resulted from hydrogen, Neils Bohr determined that they result from ionized helium.

His brother, William Henry Pickering (1858-1938), was also a notable astronomer who established several prominent observatories and made other significant contributions (including speculation of an unknown Planet X that ultimately led to the discovery of Pluto).

[Author’s personal note: Before he came to the Harvard College Observatory, Pickering was a professor of physics at the Massachusetts Institute of Technology, my alma mater. While there, he introduced a laboratory course to be required of all physics students. This was the antecedent of the modern Physics Junior Lab course, of which I have many fond memories. I recall my instructor, Rainer Weiss, telling me of one of the experiments I was conducting: “This experiment earned X a Nobel prize, so I expect Nobel work out of you!”]