Since its founding in 1891, many people have passed through the doors of the Vatican Observatory.  A quick perusal of our guestbook reveals several Names, including Popes, nobel laureates, astronauts, actors, and saints. Today’s guestbook entry is from January 8, 1915, when Giovanni Boccardi made a visit. 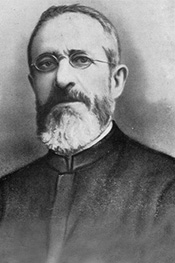 Next to his name, Fr. Giovanni Boccardi C.M. (1859-1936) wrote, “Direttore R. Osservatorio Pino Torinese” (Director of the Royal Observatory Pino Torinese).  He was an astronomer and a Lazzarist priest. (The Lazzarists, or the Congregation of Mission, are a Catholic religious congregation.)

In the late 1890’s, while working at the observatory of the Collegio Romano, he calculated the orbit of an asteroid for which he successfully proposed the name 416 Vaticana.

For the period of ca. 1899-1903, he was a professor at the University of Catania, where he was engaged in the work of the Carte du Ciel project. He catalogued over 3000 stars.

He founded the Società Astronomica Italiana (Italian Astronomical Society) in 1906.  He was also one of the first Italian astronomers to join the International Astronomical Union.

The asteroid 31015 Boccardi is named for him.