Since its founding in 1891, many people have passed through the doors of the Vatican Observatory.  A quick perusal of our guestbook reveals several Names, including Popes, nobel laureates, astronauts, actors, and saints. Today’s guestbook entry is from March 27, 1914, when Radó von Kövesligethy made a visit. 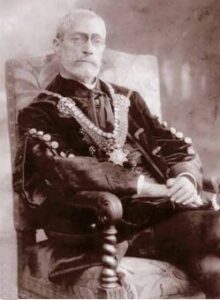 Next to his name, Prof. Radó von Kövesligethy (1862-1934) wrote simply, “Budapest.”  He was a Hungarian astronomer, physicist, and geophysicist.

This was the first of at least two visits to the Specola. He made a return visit ten years later, on May 27, 1924.

He also formulated a theory of the inverse relationship between the luminosity of a source and the peak wavelength in its blackbody spectrum (known as Wien’s Law). This was done in 1885, 8 years before Wilhelm Wien. Wien received a Nobel prize in 1911, while Kövesligethy’s contribution remained unrecognized.

Why did Planck and Wien not reference Kövesligethy in their work, when evidence suggests that they were probably aware of him?  Balacz et al. (2008, Journal of Astronomical History and Heritage 11:124-133) suggests that there was a reluctance at least on the part of Wien to cite foreign research in the period leading up to and during World War I.

Kövesligethy made use of his spectral theory to estimate the surface temperature of several stars, including the Sun.

He also developed a theory to explain the Balmer lines in the spectrum of hydrogen.

In geophysics, he developed a technique for determining the epicenter of earthquakes. He founded the first seismological station in Hungary.