Since its founding in 1891, many people have passed through the doors of the Vatican Observatory.  A quick perusal of our guestbook reveals several Names, including Popes, nobel laureates, astronauts, actors, and saints. Today’s guestbook entry is from November 14, 1913, when William J. Maxwell made a visit. 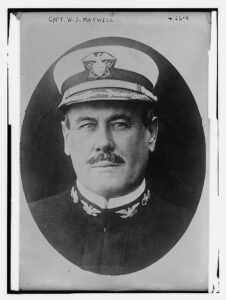 He was an inaugural member of the General Board of the U.S. Navy.

From 1914 until 1916, he served as the 18th Naval Governor of Guam. During his term, he established the Bank of Guam and the Guam Insular Patrol Force.   He petitioned Franklin D. Roosevelt to grant U.S. citizenship status for Guam islanders, which was rejected. (Citizenship for Guamanians was finally granted in 1950.)