Since its founding in 1891, many people have passed through the doors of the Vatican Observatory.  A quick perusal of our guestbook reveals several Names, including Popes, nobel laureates, astronauts, actors, and saints. Today’s guestbook entry is from October 18, 1921, when William H. Pickering made a visit. 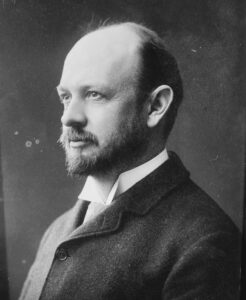 Next to his name, William Henry Pickering (1858-1938) wrote, “Harvard Observatory, Cambridge U.S.A.”  He was an astronomer who constructed several observatories.

He was the brother of Edward Charles Pickering, director of the Harvard Observatory from 1877-1919. Edward was the subject of a previous Specola Guestbook post. He made a visit in 1913.

It is possible that the occasion of the visit to the Specola was in preparation for the first General Assembly of the International Astronomical Union.  That meeting took place in May 1922 in Rome. Pickering was an inaugural member, and served on the commission for lunar nomenclature and the commission for planetary physics.

Among his scientific contributions, he discovered one of Saturn’s moons, Phoebe.

Based on orbital anomalies of the outer planets Uranus and Neptune, he predicted the existence of a sizable unknown planet, popularly called Planet X.  Early searches for Planet X found nothing, but in 1930 Clyde Tombaugh discovered an object which was (coincidentally, it turns out) where Pickering had predicted. This object was, of course, Pluto.

(n.b. Pluto is not large enough to perturb the orbits of Uranus and Neptune significantly. In fact, the observed orbital anomalies were themselves inaccurate.)

In his observations of the moon, he saw changes in surface albedo that he interpreted as seasonal effects due to lunar vegetation. (It should be noted that albedo or brightness observations made by the human eye are unreliable, as the eye’s sensitivity changes based on background light. It was not until the advent of quantitative technologies such as the photomultiplier tube [invented 1934] that accurate brightnesses could be recorded.)

He was a fellow of the American Academy of the Arts and Sciences.

The asteroid 784 Pickeringia and the craters Pickering on the Moon and Mars are named in honor of both him and his brother Edward.