Once again, we break the chronological sequence to highlight a name relevant to events of this past week. On September 25, 1983 the Observatory was visited by Fr. Leo O’Donovan SJ. 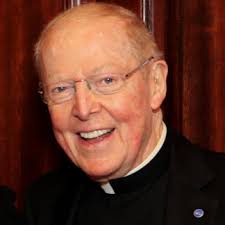 O’Donovan received his Ph.D. in theology in 1971 at the University of Münster, studying under Karl Rahner SJ (who also made a visit in 1975).  He taught at Woodstock College from 1971-1974, and from 1974-1985 was professor of theology at the Weston School of Theology.

O’Donovan was president of the Catholic Theological Society of America from 1981-1982.

In 1989 he was named president of Georgetown University, where he served until 2001.  During his tenure, the university saw significant growth in infrastructure, faculty, and programs.

From 1991-2007, O’Donovan also served on the board of directors of the Walt Disney Company.

He is currently the director of mission for Jesuit Refugee Services – USA.

This past week, O’Donovan gave the invocation prayer at the inauguration of the 46th President of the United States, Joseph R. Biden.  He has been a friend of the Bidens for a long time. He also said the funeral Mass for Beau Biden in 2015.

Text of the invocation prayer (taken from Catholic News Agency):

Gracious and merciful God, at this sacred time we come before you in need – indeed on our knees. But we come still more with hope, and with our eyes raised anew to the vision of a “more perfect union” in our land, a union of all our citizens to “promote the general welfare and secure the blessings of liberty to ourselves and our posterity.”

We are a people of many races, creeds and colors, national backgrounds, cultures and styles – now far more numerous and on land much vaster than when Archbishop John Carol wrote his prayer for the inauguration of George Washington 232 years ago. Archbishop Carol prayed that you, O creator of all, would “assist with your Holy Spirit of counsel and fortitude the President of these United States, that his administration may be conducted in righteousness, and be eminently useful to your people.”

Today, we confess our past failures to live according to our vision of equality, inclusion and freedom for all. Yet we resolutely commit still now to renewing the vision, to caring for one other in word and deed, especially the least fortunate among us, and so becoming light for the world. There is a power in each and every one of us that lives by turning to every other one of us, a thrust of the spirit to cherish and care and stand by others, and above all those most in need. It is called love, and its path is to give ever more of itself.

Today, it is called American patriotism, born not of power and privilege but of care for the common good – “with malice toward none and with charity for all.” For our new president, we beg of you the wisdom Solomon sought when he knelt before you and prayed for “an understanding heart so that I can govern your people and know the difference between right and wrong.”

We trust in the counsel of the Letter of James: “If any of you lacks wisdom, you should ask God, who gives generously to all without finding fault, and it will be given to you.”

Pope Francis has reminded us “how important it is to dream together… By ourselves,” he wrote “we risk seeing mirages, things that are not there. Dreams, on the other hand, are built together.”

Be with us, Holy Mystery of Love, as we dream together, to reconcile the people of our land, restore our dream, and invest it with peace and justice and the joy that is the overflow of love.

To the glory of your name forever. Amen.