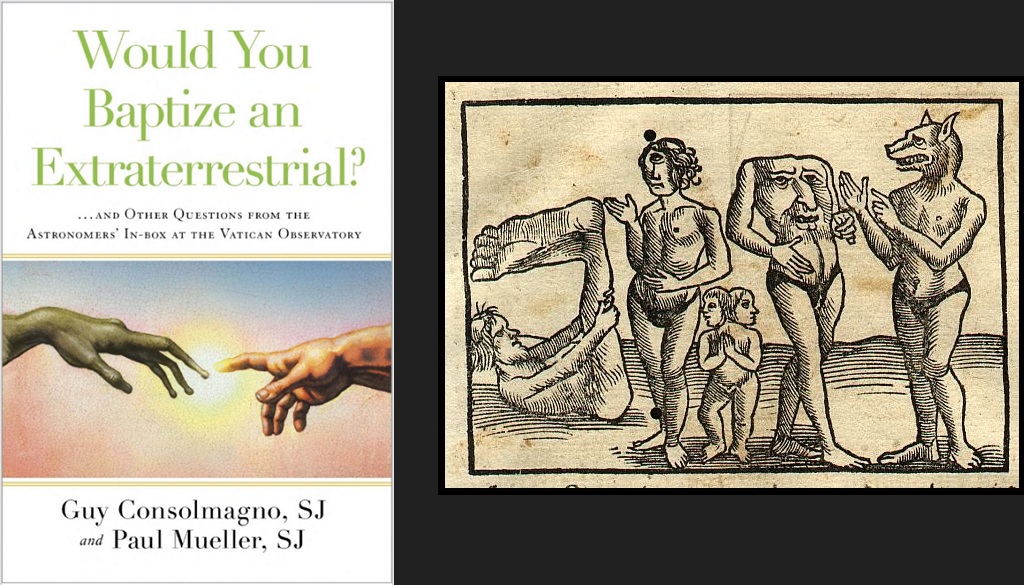 Would you baptize an extraterrestrial?

That is a question that has been put to Br. Guy Consolmagno, S.J. (Director of the Vatican Observatory and the Chief Blogger here at Sacred Space Astronomy, of course) more than once.  It is also the title of a book by Br. Guy and Fr. Paul Mueller, S.J.  In the book Guy tells the story like this:

I was visiting England to give an astronomy talk at the Birmingham Science Festival, in 2010.  As it turned out, the day of my talk happened to coincide exactly with the visit of Pope Benedict to Birmingham.  So the cream of British journalism was there.  I had agreed to give an interview to publicize the Festival, but all they wanted to ask me about was the Pope….

[T]hey kept asking me questions like “What is your biggest source of conflict about the Pope?”  Or “Has the Pope ever tried to suppress your scientific work?”….  They didn’t want to hear me tell them how much Pope Benedict supported the Vatican Observatory and its scientific work.

So, finally, frustrated that they weren’t getting the story they wanted out me, one of them asked, “Would you baptize an extraterrestrial?”

To which Guy answered, “Only if she asks!”  That got the laugh Guy intended, but Guy noted that stories later ran as if he had made “some sort of official Vatican pronouncement about aliens.”  Of course!

Well, it seems St. Augustine, the well-known bishop of Hippo in Africa, might have agreed with Br. Guy about baptizing extraterrestrials.  In St. Augustine’s day, people believed that all sorts of strange, sort-of-human creatures existed in far-off lands.  These were as strange as any extraterrestrial.

The ancient author Pliny the Elder had written about these strange “people”.  There were people with one leg and a giant foot, people with a single eye, people with dog heads, people with no heads at all and faces in their chests, and so forth.  Scholars for centuries took Pliny at his word.  His strange people even appear in Shakespeare:

It was my hint to speak—such was my process—
And of the Cannibals that each other eat,
The Anthropophagi, and men whose heads
Do grow beneath their shoulders.
[Othello, Act I, scene iii]

And what is more, St. Augustine discusses them.  The following is from his City of God, Book XVI:

It is also asked whether we are to believe that certain monstrous races of men, spoken of in secular history, have sprung from Noah’s sons, or rather, I should say, from that one man from whom they themselves were descended.  For it is reported that some have one eye in the middle of the forehead; some, feet turned backwards from the heel; some, a double sex, the right breast like a man, the left like a woman, and that they alternately beget and bring forth: others are said to have no mouth, and to breathe only through the nostrils; others are but a cubit high, and are therefore called by the Greeks “Pigmies:” they say that in some places the women conceive in their fifth year, and do not live beyond their eighth.

So, too, they tell of a race who have two feet but only one leg, and are of marvellous swiftness, though they do not bend the knee: they are called Skiopodes, because in the hot weather they lie down on their backs and shade themselves with their feet.  Others are said to have no head, and their eyes in their shoulders; and other human or quasi-human races are depicted in mosaic in the harbor esplanade of Carthage, on the faith of histories of rarities.  What shall I say of the Cynocephali, whose dog-like head and barking proclaim them beasts rather than men?

But we are not bound to believe all we hear of these monstrosities.

But whoever is anywhere born a man, that is, a rational, mortal animal, no matter what unusual appearance he presents in color, movement, sound, nor how peculiar he is in some power, part, or quality of his nature, no Christian can doubt that he springs from that one protoplast.  We can distinguish the common human nature from that which is peculiar, and therefore wonderful.

It would seem that what Augustine thinks makes us “human” is that we are rational, mortal animals—and that appearances count for nothing.  I think Augustine would baptize a dog-head, so I bet he’d baptize a Klingon, just like Br. Guy said!  If she asked, that is.

I thank Glenn S. of St. Louis Bertrand Church in Louisville, Kentucky,
for calling my attention to St. Augustine and the Cynocephali.