The summer night sky is full of stars—bright stars like Vega and Arcturus, middling stars like Polaris (the North Star) and Mizar (the star in the “bend” of the Big Dipper’s handle), and dim stars like Rho Leo (a faint star in the constellation of Leo, the lion) and Alcor (the faint companion of Mizar).  When we look at these stars, what are we seeing?  Astronomers say that the sun is a star.  Are the stars then suns?  How do we even know what these stars are?  In the posts from two weeks ago and from last week we laid the groundwork for answering these questions.  We looked at the stellar magnitude system and the things that affect a star’s magnitude.  Now let’s finally answer the questions.

Some of the stars of the summer sky as represented by the Stellarium planetarium app, including Vega (upper left) and Arcturus (lower right). 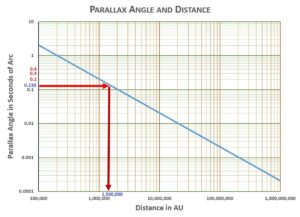 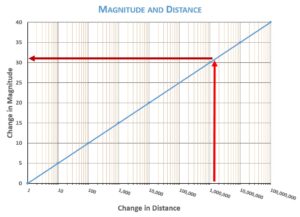 That makes sense.  Vega is bluer than the sun, and therefore hotter.  In fact, based on its color, Vega should be about 1.7 times hotter than the sun.  Judging from the magnitude and temperature chart, being 1.7x hotter would only make Vega about 2 magnitudes brighter than the sun at the same distance. 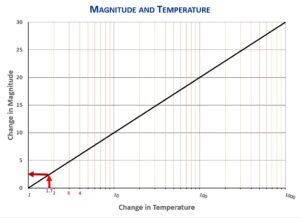 So Vega must also be larger than the sun.  According to the magnitude and size chart, to account for the remaining 2 magnitudes of brightness, Vega must be about 3.3 times the sun’s radius. 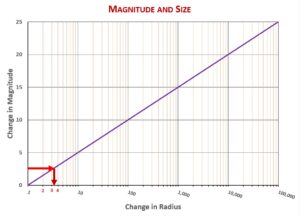 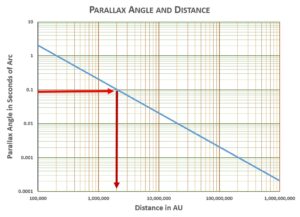 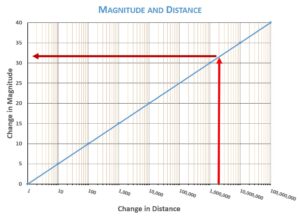 But Arcturus is a golden yellow star.  It is a little redder, and thus a little cooler, than the sun.  Its color tells us that it is about 9/10 the sun’s temperature, so the sun is 10/9 its temperature.  Were Arcturus the size of the sun, the sun would be the more luminous, but only by a magnitude or less according to the charts. 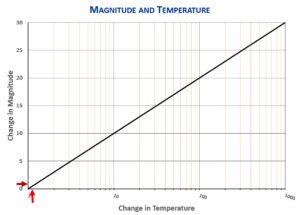 Therefore the reason Arcturus would be five magnitudes brighter than the sun were it at the same distance as the sun has to be because Arcturus is larger than the sun.  According to the size and magnitude chart, that five magnitude (plus the half or so magnitude due to temperature) difference means Arcturus must be about 14 times the sun’s radius. 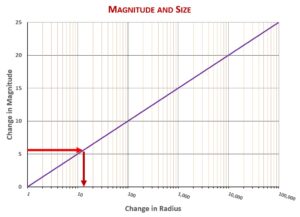 According to Celestia, Vega is 49.1x as luminous as the sun, and about 3x as large, while Arcturus is 113x as luminous and 25x as large.  So our calculations are in general agreement with Celestia.  That’s not too bad, since Celestia’s values are no doubt based the work of astronomers who used more sophisticated and precise reasoning and measurements than these limited charts!

The sun, Vega, and Arcturus as they would appear from a distance of 1 AU (the distance of the Earth from the sun), according to the Celestia app.

There are stars more powerful than Arcturus.  Consider Antares, in the constellation of Scorpius.

More stars of the summer sky as represented by the Stellarium planetarium app, including the stars of Scorpius. Antares is at center, slightly toward the top.

According to Celestia, Antares is over 9000x as luminous as the sun, even though it is only about half as hot.  The luminosity of Antares is owed to it being so huge that, were it in the place of the sun, the Earth would be deep inside it!  Antares is bigger than Earth’s orbit. 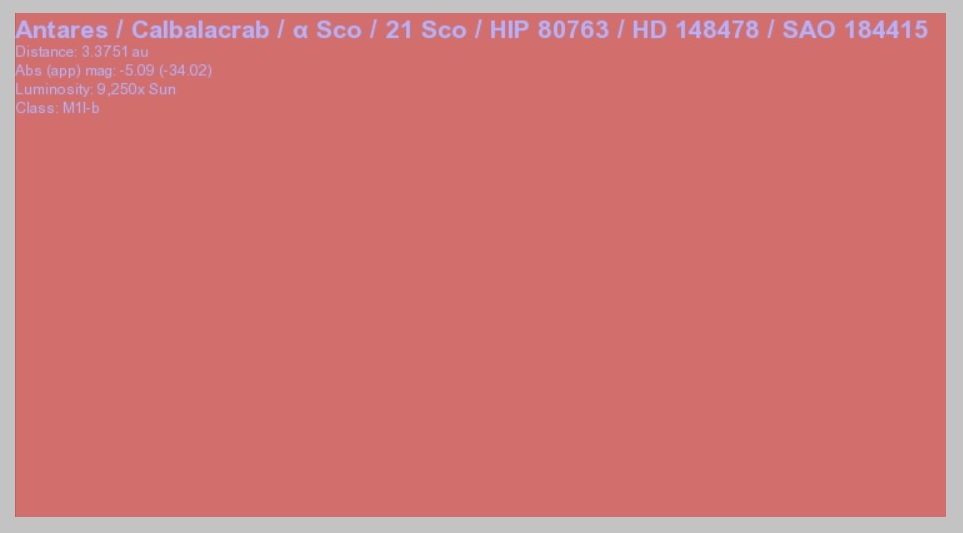 Antares is so huge that, were it in the place of the sun, Earth would be inside the enormous red star.

Then there is Rho Leo, which doesn’t look like much in the sky, but that is only because it is so far away.  Celestia says Rho Leo is almost 70,000x more luminous than the sun. 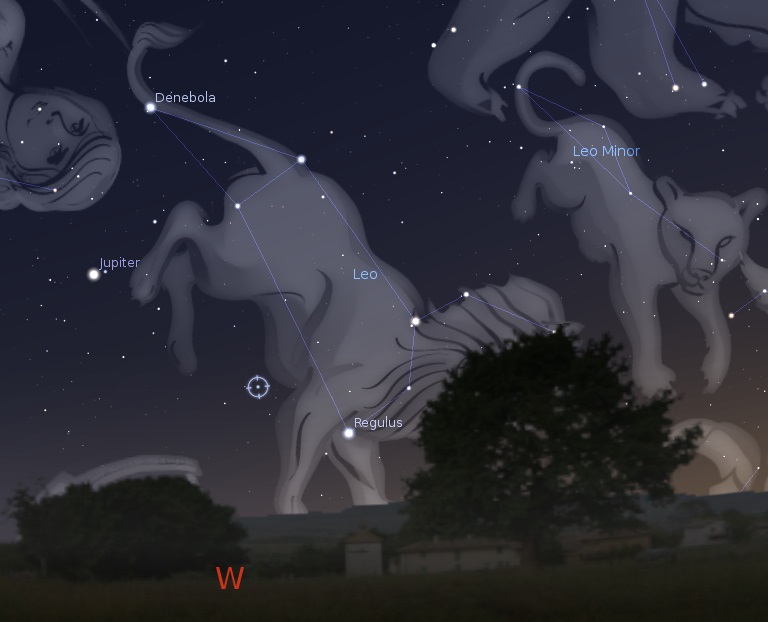 The sun and Rho Leo as they would appear from a distance of 1 AU, according to the Celestia app. However, Celestia cannot represent the blinding brilliance of Rho Leo’s surface.

Don’t be surprised that so many of the stars visible in the summer sky are more powerful than the sun—luminous stars stand out.  There are plenty of sun-like stars out there; they just do not stand out.  Consider HIP 80337, a dim star in Scorpius. 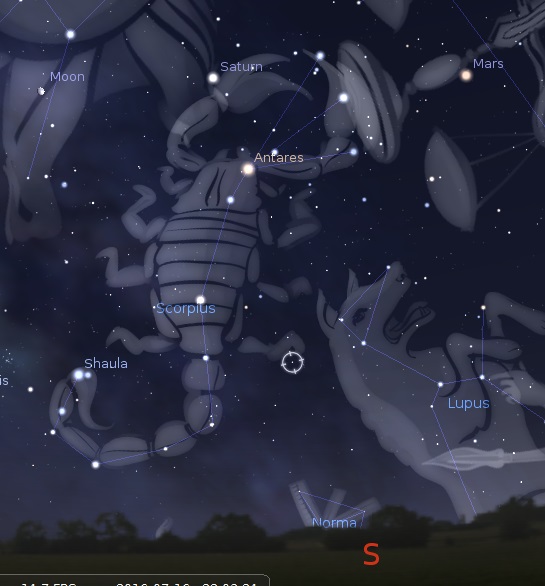 According to Celestia, HIP 80337 is very sun-like: same size, same color, same luminosity.  Put HIP 80337 in the place of the sun and it would look pretty much the same.

HIP 80337 has about the same parallax as Arcturus, and therefore is about the same distance.  When you look at HIP 80337 you are seeing what the sun would look like if it were where Arcturus is.

Now consider Barnard’s Star.  It is a summer star, but you cannot see it without a telescope, even though it is not half as distant as even Vega.

The location of Barnard’s star.

Like Antares, it is not very hot, but unlike Antares, it is small.  According to Celestia, it is not even one half of one thousandth of the sun’s luminosity.  Or consider the star 2MASS J18353790+3259545, near Vega.  Celestia says its luminosity is just a tiny fraction of Barnard’s star!  Were 2MASS J18353790+3259545 to be put in the place of the sun, it would look so small as to be almost star-like.  It would glow red like a piece of charcoal, and provide less light than a full moon.  Astronomers believe that small, dim, red stars like Barnard’s and 2MASS J18353790+3259545 comprise the vast majority of stars in the universe—we just can’t see them.

Next week is the final installment of Summer Stars.