This article first appeared in The Tablet on 11 September 2010, pp 4-5, following the publication of the book by Stephen Hawking and Leonard Mlodinow, The Grand Design 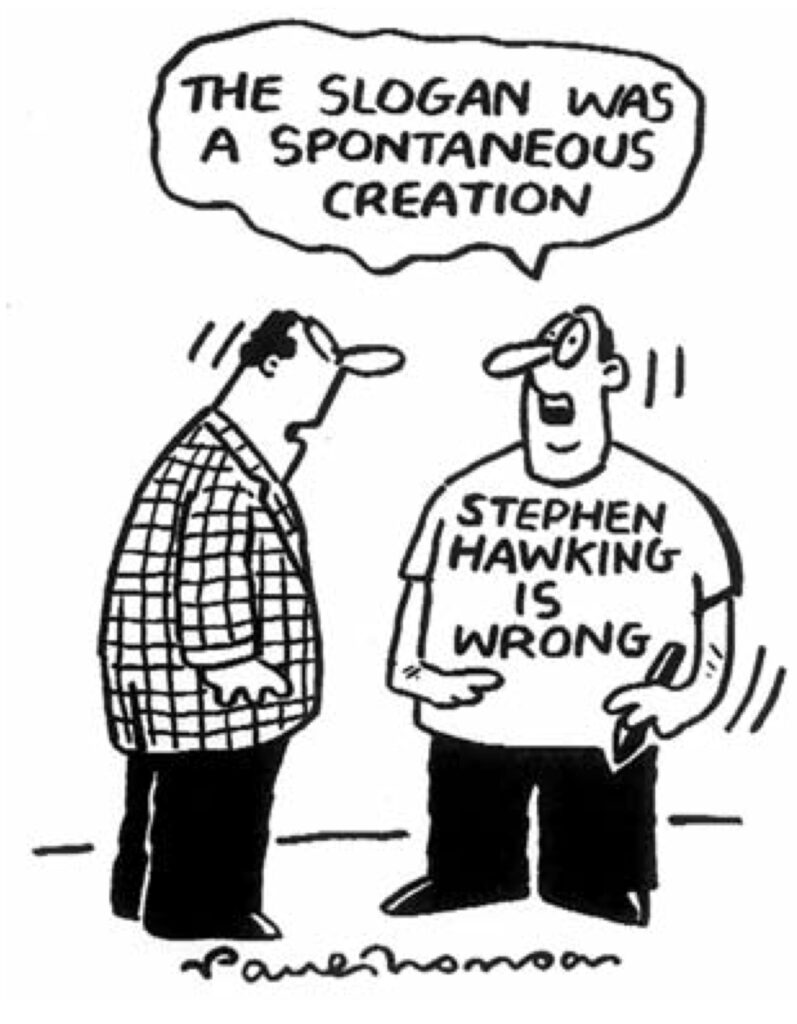 Cartoon by Paul Thomas, from the Tablet

Stephen Hawking is not the first scientist to declare God obsolete. But his latest findings following his researches into the origins of the universe provoke profound questions about our perceptions of God and the relationship between science and theology.

“Because there is a law such as gravity, the Universe can and will create itself from nothing. Spontaneous creation is the reason there is something rather than nothing, why the Universe exists, why we exist… It is not necessary to invoke God to light the blue touch paper and set the universe going.” Such were the fighting words excerpted in the press from Stephen Hawking’s latest book, The Grand Design, co-authored with Leonard Mlodinow. So no need for God, science has it all sorted.

In the late 1920’s, the Belgian mathematician (and Catholic priest) Georges Lemaître had proposed that the universe was evolving from an initial condition of high energy – what he called a “cosmic seed” and others (notably his friend and rival, Fred Hoyle) dubbed the “Big Bang.” The evidence of astronomy gathered since then has demonstrated pretty convincingly that such a bang did occur. But what was the origin of the initial cosmic seed?

For years, Stephen Hawking has been working on a theory suggesting that quantum fluctuations in a primordial vacuum could provide a setting that would by itself, by chance, produce that initial singularity in space-time. As the cosmologist (and my fellow Jesuit at the Vatican Observatory) Bill Stoeger has explained it, “[James] Hartle and Hawking… showed, by using the concept of imaginary time – by which one treats time exactly like a spatial dimension – and by conceiving that there was no initial 3-dimensional spatial boundary to the universe, that we can in a consistent way obtain from the cosmic wave-function a universe like the one we inhabit.”

Describing it in those terms sounds great in a popular science column, but actually making the maths work out is a different matter. From the sound of the press releases, however, apparently Hawking now feels he’s succeeded.

Hawking is as good as anyone working today when it comes to visualizing, and expressing mathematically, the nature of physics at extreme conditions. For me to judge the physics of his work would be presumptuous, exposing my own ignorance of his field… any more than I would take seriously anything Hawking might have to say about my own research in meteoritics.

Or theology. Suppressing any number of snide comments I could make about the conclusions he draws from his work about God, however (if he hadn’t been able to come up with a theory to start off the universe, would that have caused him to publicly confess God existed after all?), the fact is, Hawking is right. There is no need for a God to start the universe off.

But he’s by no means the first scientist to point this out. When the French mathematician Pierre-Simon Laplace explained his advanced mathematical description of planetary orbits to Napoleon, the emperor interrupted him to ask about the role of God. Laplace is said to have replied, “I have no need for that hypothesis.”

Napoleon’s question was a reference to Isaac Newton’s original work on gravity and orbits. Because there is a law such as gravity, Newton had been able to explain the orbits of the planets. But Newton realized that the interaction of one planet on another might well perturb the stable simplicity of any given planet’s orbit. This gap in his explanation, the fact that the orbits were nonetheless stable, he posited was a demonstration of the action of God. Newton had only just invented differential calculus; Laplace, building with brilliance upon a hundred years’ further development in the field, was able to show that the orbits could be stable without recourse to supernatural intervention.

Newton was a Deist, one who did not see God as personally involved in the lives of individual humans but rather as merely the “prime mover” in Aristotle’s sense, the original source of motion from which all other motions derived. His use of physics as a way of demonstrating the necessity of such a God made a big impact in the 17th and 18th centuries. There was no split between science and religion; rather, religion could be based on the firm certainties of Newton’s laws. To quote Alexander Pope, “God said ‘Let Newton Be’ and all was light.”

But this God of the Gaps is theologically treacherous. The most obvious danger is that (a la Laplace) once the gaps are filled by natural laws themselves, then the “proof” of God’s existence is turned on its head; one instead seems to show that there is no need for God, after all. The Jesuit theologian, Michael Buckley, has argued that precisely this pattern is what gave rise to modern atheism.

A more subtle problem is that such of version of God reduces him to just one force alongside other forces in nature. Rather than supernatural, present in the beginning, outside space and time, God becomes a pagan nature deity, responsible if not for thunder and the growth of crops, then at least the primordial big bang and the growth of the universe.

There is an irony, of course, in Laplace’s dismissal of Newton’s concern. In the two hundred years since his Napoleonic quip, mathematicians have discovered chaos theory and astronomers now understand that planetary orbits can indeed be chaotic. There is good evidence that the early orbits of planets were unstable. Just because the solar system has been relatively quiescent for the past four billion years doesn’t mean it always was that way, or always will be.

Likewise, Hawking’s conception of “spontaneous creation” may someday look as quaint as “spontaneous generation” compared to evolution. Indeed, I would hope so. That’s the sign of a healthy field.

Meanwhile, we may wince at Hawking’s misapplication of the challenge first posed by Newton’s contemporary, Gottfried Liebnitz, in an essay “On the Ultimate Origin of Things.” To ask “why is there something instead of nothing” is very different from asking “how did things get started?” To cite again Fr. Stoeger, “The Creator empowers the physical processes to be what they are. The Creator does not replace them. Creatio ex nihilo is not an answer to the question of temporal origin; Creatio ex nihilo is, instead, about the ultimate ontological origin of reality.” (I am quoting from his chapter in the Vatican Observatory’s 2009 book, The Heavens Proclaim: Astronomy and the Vatican.)

That said, however, Hawking does us an important favor by eliminating such an image of God. The “god” that Stephen Hawking doesn’t believe in is one I don’t believe in either. God is not a force to be invoked to swell a progress, start a scene or two, and fill the momentary gaps in our knowledge.

What’s more, I believe in such a God not because of the absence of any other explanation for the origin of the universe, but because of the person of Jesus Christ — in history, in scripture, and in my own personal life of prayer. And even more strongly, I have faith in this God not merely because the universe exists, but because it is beautiful and fun to play in… that play we call science.

95  |  Across the Universe: Waiting for the Call