This article first ran in The Tablet in February, 2016

At the museum of the history of science in Florence, honoring its famous local son Galileo, one can find a marvelous display of a 17th century high technology peculiar to Italy: fine glasswork. Consider the bubble-free glass that Galileo needed for his telescope lenses, the “Florentine flasks” beloved of chemists, the elaborate thermometers of the “Accademia del Cimento.” Italian glass technology made Italy the birthplace of the scientific revolution.  But a century later, as displayed in another room in this museum, mechanical devices produced in Britain and Germany allowed measurements of our universe to a much higher precision. With such instruments, those nations overtook Italy in the world of modern science.

The February 2016 announcement of the observation of gravitational waves demonstrates again how our knowledge of ourselves and our place in the universe is advanced by our ability to measure nature ever more precisely. To detect the tiniest ripple in the space-time continuum, the Laser Interferometer Gravitational-wave Observatory (LIGO) experiments in Louisiana and Washington State had to compare the space between two 4 kilometer paths, set at right angles to each other, with a precision of better than one thousandth the radius of a proton. 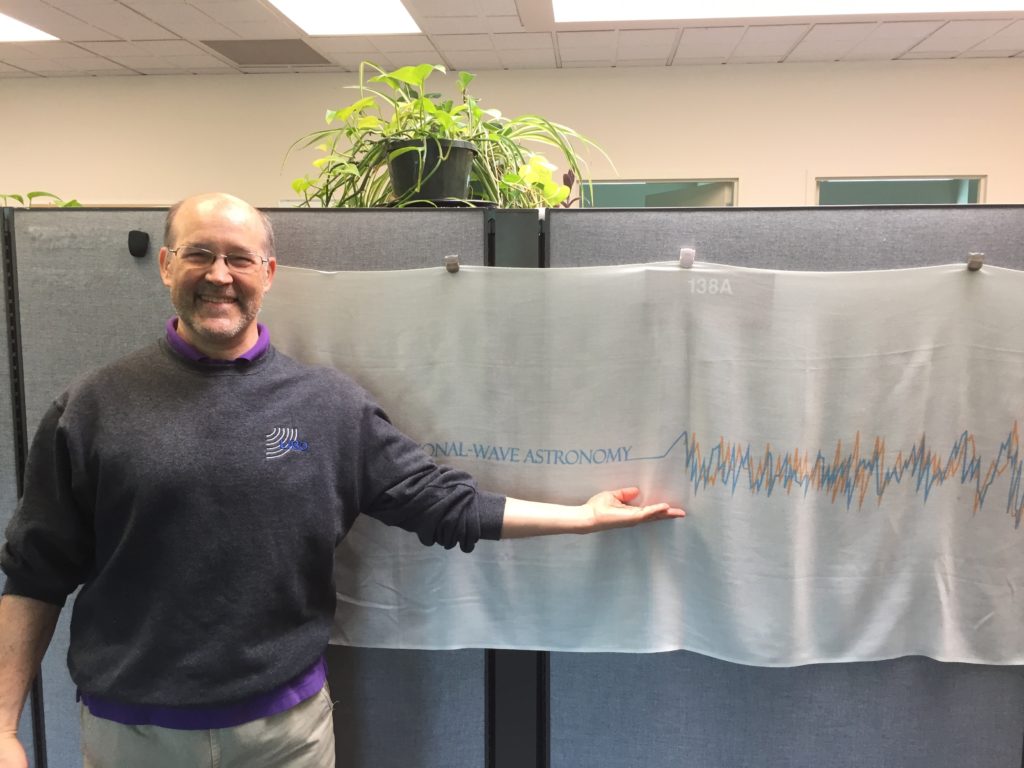 In March 2016 I was shown around the LIGO facility outside Baton Rouge by my friend Keith (not to be confused with Kip!) Thorne, who works there; here he shows a copy of the plot confirming the first gravitational wave detection

The “Laser” in the LIGO name made this possible. Each arm of the detector is kept at a vacuum, and precisely isolated so that no vibrations will mask the tiny signal. Laser beams are sent down each tunnel, reflected back by superbly figured mirrors, and then compared. Much like how a piano tuner listens to the blend of a piano string’s note against a tuning fork, a slight difference in the lengths of the tunnels will cause the combined beam show an “Interference” pattern (the I in LIGO) that can be used to detect tiny differences in path lengths between the two beams.

But why should the beam lengths vary?

In the late 16th century, Isaac Newton had described how gravity controls the orbit of a moon or the fall of an apple, but he famously refused to even try to guess what gravity actually was; when challenged, he replied, “hypotheses non fingo” (I feign no hypotheses). In 1915, however, Einstein took up that challenge and proposed in his General Relativity theory: gravity was the result of matter warping space and time (which he had united as “spacetime” in his earlier Special Theory of Relativity.)

One classic illustration of his idea imagines that spacetime could be represented in two dimensions as a flat sheet of rubber. Any mass (like a star or a planet) warps spacetime the way a weight placed on the rubber bends it out of shape. An ant walking in a straight line across this rubber sheet which got too close to the warped rubber would find its path curved around and around the weight — or bent into the weight itself.

But a violent change in the position of that weight — caused, perhaps, by two such weights spiraling into each other or colliding — could set up ripples in the rubber sheet which might propagate like waves of Gravitational warping (hence the G in LIGO). In our three dimensional universe, such ripples would manifest themselves as the fabric of spacetime itself slightly shrinking and growing in the direction that the waves travel. Of course, such ripples grow weaker and weaker as they fill more and more space, radiating away from their source.

But collisions between such massive objects — say, two black holes in space — don’t happen every day; at least, not close enough to us that we could expect to see one within the lifetime (or grant cycle) of an observer. Not unless, that is, the observer has such a delicate detector that even events in incredibly distant volumes of space can be observed. The first version of LIGO, set up in 1999, failed to see any confirmed gravitational wave events. But in late 2014 an improved version, ten times more sensitive, came online. During an engineering “shake down” run of the new system in September, 2015, the event announced this past month was captured by the detector in Louisiana.

The first step, of course, was to confirm the possible event by seeing if it was recorded by the second detector in Washington. It was. Furthermore, the Washington detector saw its event a few microseconds later, as would be expected for a wave traveling at the speed of light across the three thousand kilometers’ distance between the two sites.

Meanwhile, theorists had been working for years to calculate just what sorts of events might give rise to gravitational waves, and what the signal of each sort of event might look like. Such calculations were essential in designing the detectors, so that the engineers would have an idea of the precision that they’d have to achieve in order to get reasonable results.

Comparing the predictions with the observations allowed the observers to figure out what sort of event they were seeing. The slowly increasing amplitude of the observed signal, followed by its abrupt ending, matched the predictions for two massive black holes spiraling together and then colliding. The time difference between the detectors told us the direction back to where the waves came from. The magnitude of the signal let them calculate how far away the event was (a bit over a billion light-years distant) and how massive the black holes were (roughly 30 times the mass of the sun, one somewhat bigger than the other).

They even concluded that roughly half the mass of the combined system had be converted from mass into energy (thanks to Einstein’s famous E=mc^2 rule) at the instant of collision. The system briefly emitted as much energy as all the stars of the visible universe combined.

With these details, the experiment did more than merely confirm the existence of gravitational waves; it also served as a way to Observe the black holes that caused the wave. Hence the “Observatory” in LIGO.The massive gravity of black holes prevents light from escaping their surfaces; only gravity waves can be transmitted directly from them to us.

While the physicists themselves are understandably delighted with this new tool to observe the universe, there are also some interesting lessons for the rest of us as well. It has been estimated that over the past 20 years this project has helped support and train a hundred thousand scientists and engineers. Additional detectors will soon come online in Europe and Asia, and eventually in space.

Perhaps the most remarkable aspect of this project (as with the Apollo moon landings) was the political will and organizational skill that orchestrated the necessary talents of so many people, for so long, to a cause that produced neither money nor power nor, for most of them, fame. This was science that no lone genius, no matter how bright, could have accomplished. It shows what promise and power we humans can achieve when we join together for a common cause.

It also confirms, in the strongest way yet, the core of Einstein’s insight. The laws describing the universe must be far more surprising and strange than the simple Enlightenment conception of Isaac Newton.