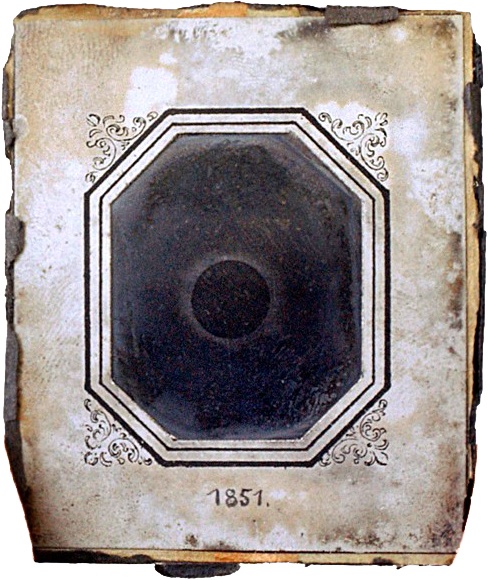 In 1858, Warren De la Rue was visiting Russia on a business trip and was introduced to the idea of photographing the 1860 Solar eclipse that was to occur in Spain by Dr. Medler. He also was shown a Daguerreotype of the 1851 eclipse taken by Dr. Busch with the Konigsberg Heliometer. 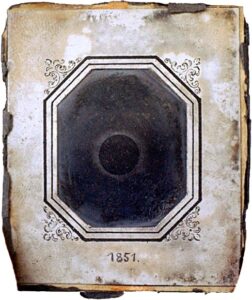 At first, he was unimpressed with the detail of the Daguerreotype (that is to say the lack of detail of the “protuberances”, not the image itself) and was a little concerned with the practicality of photographing such an event. He was quick to observe that the state of the photographic art and that of celestial photography itself had advanced considerably in the intervening 7 years.

He had determined to make the trip himself, but was limited in instruments to photograph with. He had in his own collection several telescopes with which to photograph, however they were limited in image size, the largest of which would still be too small to overcome any defects in the collodion process. His attention was thus drawn to the Kew Photoheliograph that he had overseen the construction of. At the time it was reliably taking 4” diameter images of the sun regularly. This size was ideal for studying the prominences and large enough to be able to discern the difference between a collodion artifact and a solar one.

Mr. Airy of the Kew Committee offered his services in organizing travel. The Astronomer Royal procured a steamship from the Admiralty, and a sum of 150 pounds was served for preparing for the trip. De La Rue and 4 other men were to travel to Spain in June of 1860. Preparing the necessary articles took a year. This included not only preparation of the Photoheliograph and a new pedestal, but all the chemistry and a portable observatory. 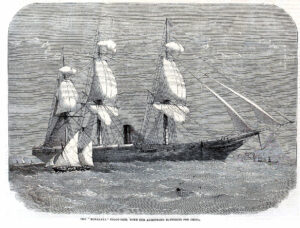 HMS Himalaya, Steamer that took the expedition to Spain.

The observatory, at first was to be a simple tent, mostly to act as a darkroom for developing the plates. When it was learned that a steamship was available, this turned into a collapsible wood structure, divided into two rooms. The first had a retractable roof to allow for observations, the second was a darkroom complete with a cistern and sink. The entirety was covered by a heavy canvas awning that was pulled back for observation. The half covering the darkroom was kept wet, and succeeded in keeping the darkroom several degrees cooler than the warm Spanish summer air.

In addition to the Kew instrument, several other pieces of equipment were included. A transit, barometers, sextant, and 3 chronometers were added. A double set of chemistry for photography was made up, as well as reserves to make more in case of emergency. Dry rations were included as well, in case the gentlemen were required to camp. All told almost 2 tons of equipment was packed up.

The journey was not kind to several of the more delicate instruments, especially the chronometers. These were needed for both timing the eclipse, but also finding the exact latitude of the observation site. De La Rue finally double checked the location data by spotting known stars and timing their ascent and measuring the angles needed to locate them. Another hitch was the location that was chosen. A thrashing floor used for preparing grain after harvesting was to be used, however the farmer needed it the day of the eclipse. Once the party explained their purpose in being there, the farmer offered to travel “some distance” to the next floor. He did this without any remuneration for his inconvenience. Several times during the lecture, De La Rue mentions the great lengths the locals, the constabulary, and his own troupe went to to ensure success. Often to some hardship of their own, and always without taking any gifts of gratitude.
Barring a small fire caused by an overenthusiastic assistant, the recording of the eclipse was an uneventful, and total success. Two photographs of the totality were taken, along with several drawings. These provided the necessary proof that the prominence were indeed a solar atmosphere, as suspected. 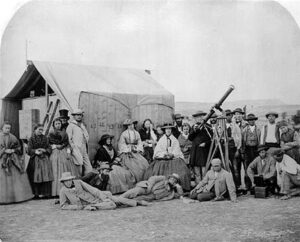 The members of the Eclipse Expedition

There were a total of 31 in the party, that split into 2 groups. Airy and his party, including his wife, son, and eldest daughter were one. . The De la Rue party found terrific luck. The whole enterprise was seen as a total success, and the group began referring to themselves as “the Himalaya Expedition”. While on the way home, it was decided that everyone involved should be officially thanked, from the ship’s crew, to the constabulary and residents of the small town they imposed on, such was the joy they felt in their successes.

It wasn’t until 1862 that the official data was released,  due to the need for an accurate instrument for measuring the photographs. The device used for measurements was a sliding and rotating stage, each divided into degrees with a magnifying lens for looking at the image. The idea was to reference the crosshairs on the image to give definite 90 degree angles, and measure in minutes of arc, the location of spots, and coronal features. This way, height and width of the prominence could be figured.

Thus ended the first solar eclipse expedition. Subsequent trips to various parts of the Empire were undertaken with Heliographs, and the latest device: the solar spectrometer. Both professional and amateurs alike traveled to view the Sun’s corona.