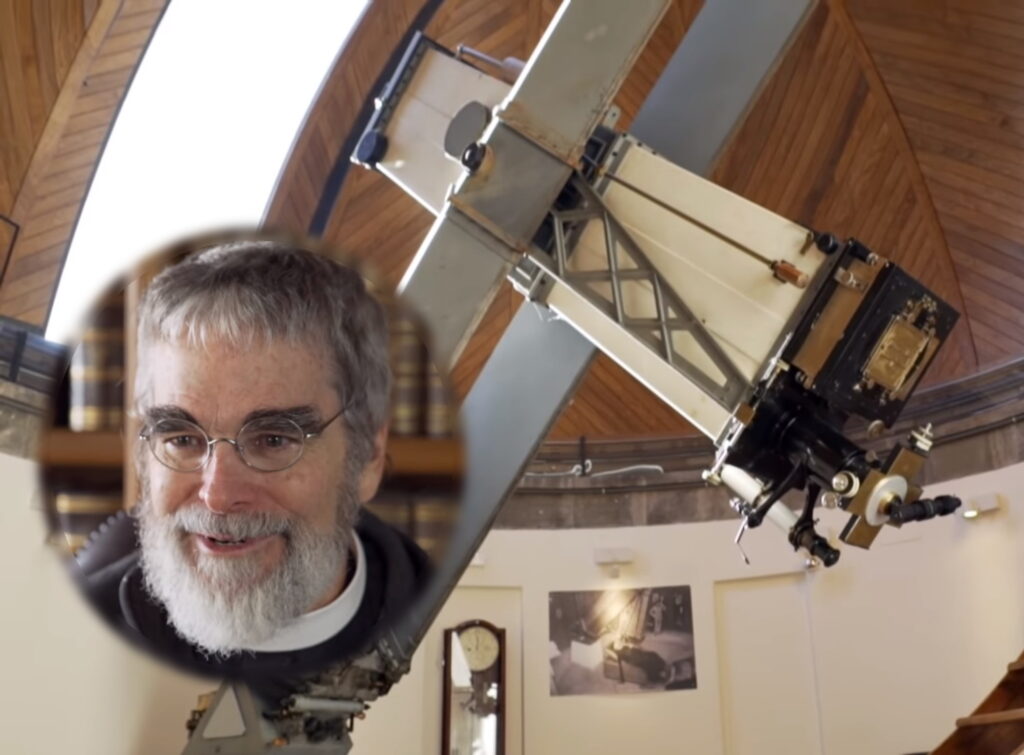 (YouTube:Objectivity #221 – 10:55)
Brother Guy Consolmagno gives Brady Haran a tour of the Vatican Observatory; he shows meteorites from the Vatican Observatory’s collection, and tells some interesting stories behind a few of them. He shows a remarkable antique clock from the end of the 1800s – its pendulum filled with Mercury! Br. Guy also shows the Vatican flag that flew to the Moon on Apollo 17!

View an extended interview with Br. Guy on Sixty Symbols at: https://youtu.be/Z0DAKaR16cY

(YouTube: Deep Sky Videos – 22:31)
Brother Guy Consolmagno gives Brady Haran a tour of Castel Ganfolfo and the Vatican Observatory; watch as Br. Guy fires up the vintage 1930s drive hardware for the Zeiss Double Astrograph Telescope – the telescope used to make the photographic plates seen in “The Pope’s Space Rocks” video above. Next, the tour takes you to the second dome, currently under repairs – the refractor telescope in this dome has a 16 inch lens!

The tour continues with a drive through the Papal gardens to the Carte du Ciel and Schmidt telescopes – Br. Guy shows the not-so-vintage Xbox controller that can be used to control the recently upgraded drive hardware of the still very functional 1891 Carte du Ciel telescope!

Next up, the Schmidt telescope, which could be used to photograph the spectra of a large region of stars. This telescope is the location where Pope Paul VI watched the Apollo 11 Moon landings, and recorded a congratulatory message to the astronauts. Br. Guy explains how Pope Pius XII loved astronomy and paid for the Schmidt telescope with his personal family fortune!

Br. Guy explains how advancements in mirror technology led to the creation of the Vatican Advanced Technology Telescope on Mt. Graham in Arizona.

(YouTube:Sixty Symbols – 36:10)
Brady Haran, interviews Brother Guy Consolmagno and delves into the background of the Vatican Observatory. Br. Guy starts by explaining how he is the only astronomer who is directly appointed by the Pope. He goes on to say:

… which honestly made me laugh out loud because this is exactly my situation with the Vatican Observatory Foundation!

Br. Guy talks about the three Popes that he has served under, and their backgrounds in various fields of science. He tackles the question of “Why is there a Vatican Observatory,” and explains that having a national observatory was one way for the Vatican to be recognized as an independent nation.

Br. Guy tackles numerous questions about various aspects of faith and science – a couple times making me laugh pretty hard; he also talks the history of Galileo and other world events happening during that time period. He discusses the creation story of Genesis in the Bible, the conclusion of that story being the seventh day – a day of rest and a time for contemplation.