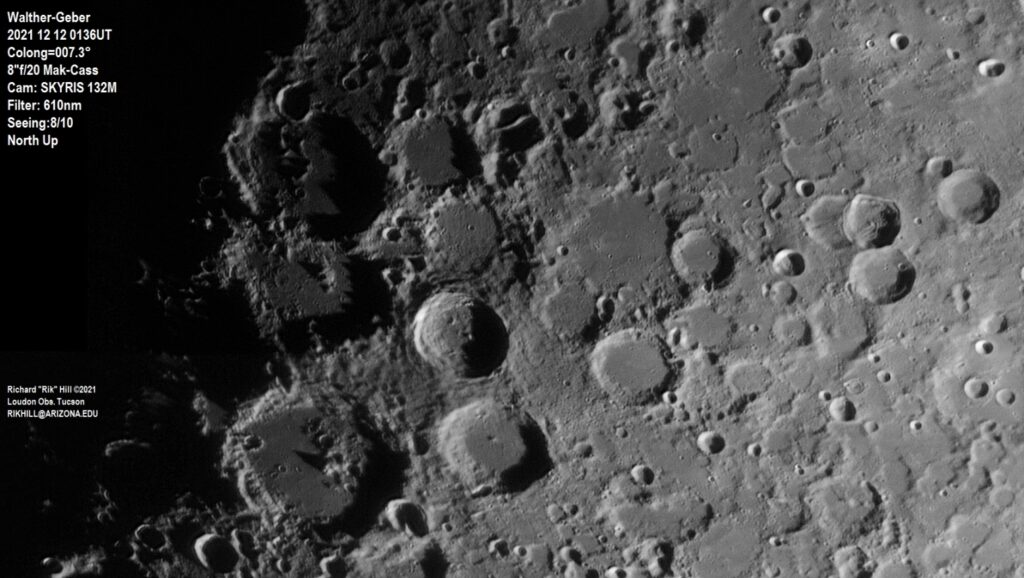 We have an interesting field here from Walther (145km dia.) in the lower left, with it’s strange off center mountains casting a nice shadow, to Geber (46km) near the right edge. First there is the alignment of 3 vertical craters starting with Walther. All three have a similar polygonal shapes with the crater above Walther being Regiomontanus (129km) and above that Purbach (121km). It’s a striking alignment. To the right of Walter are two more vertically aligned, similar sized craters, Aliacensus (82km) the flat floored crater below and Werner (71km) above. Further right is another crater, Apianus (65km) also of similar size, forming a triangle with the previous two. Above Werner is a heavily eroded crater Blanchinus (70km) and above it is La Caille (70km) on the right wall (east) of Purbach. Notice that the northern crater wall of Blanchinus and southern wall of La Caille form a crude “X” with the right (east) wall of Purbach. This is the famous “Lunar X” that would have been much more obvious and striking an hour or two earlier. To the right of La Caille is the crater Delaunay (48km) with its curious wall bisecting the crater. The outer walls of this crater are heavily modified by post impact erosion from subsequent impacts like the large crater on its southern wall, La Caille E (27km).

Below Apianus is a curious kidney bean shaped crater (if it can be called “crater”) that is Poisson, listed as 82km dia. but it is anything but round. It is more like 82km long and about 15km wide. The western or left side is listed as Poisson T but in such case it makes Poisson much less than 82km. Moving further right or east and north of Apianus we see another flat floored crater, Playfair (49km). Then, continuing on, there is another pair of north-south craters with Azophi (49km) on the bottom and Abenezra (43km) above it with its flat north wall and swirled grooves on it’s floor not seen here because of the shadow. The last crater in the line is the aforementioned Geber (46km), a very circular flat floored crater with an interesting 1.5km central crater.

There are more named features here but this should give you a good roadmap to explore further.