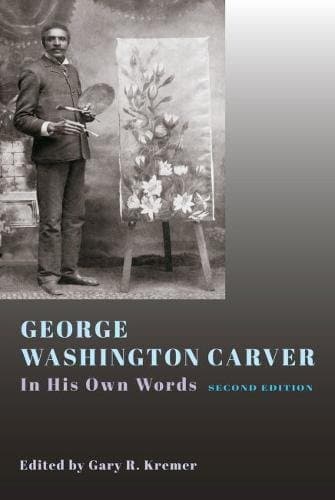 This book is a collection of letters by George Washington Carver, edited by Gary Kremer and published in 1987 by the University of Missouri Press. One chapter of the book is focused on “The Scientist as Mystic: Reading God out of Nature’s Great Book”. Kremer writes that Carver—

[N]ever separated the worlds of science and religion; he saw them as mutually acceptable and compatible tools for arriving at truth…. [He was] a deeply religious man who treasured the world of nature and saw himself as a vehicle by which the secrets of nature could be understood and harnessed for the good of mankind.

George Washington Carver (1864-1943), best known for his work as a scientist and a botanist, was an anomaly in his own time—a black man praised by white America.

This selection of his letters and other writings reveals both the human side of Carver and the forces that shaped his creative genius. They show us a Carver who was both manipulated and manipulative who had inner tensions and anxieties. But perhaps more than anything else, these letters allow us to see Carver’s deep love for his fellow man, whether manifested in his efforts to treat polio victims in the 1930s or in his incredibly intense and emotionally charged friendships that lasted a lifetime.

The editor has furnished commentary between letters to set them in context.

Click here for a preview, courtesy of from Google Books.