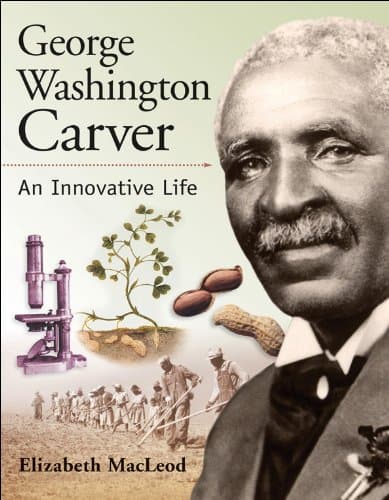 This 2007 book by Elizabeth MacLeod is for younger readers, and tells about the life and work of agricultural scientist and biochemical engineer George Washington Carver.  Henry Ford described Carver as the greatest scientist living at the time.  Then-senator Harry S Truman stated that “The scientific discoveries and experiments of Dr. Carver have done more to alleviate the one-crop agricultural system in the South than any other thing that has been done in the history of the United States.”  Carver was a Christian who taught his students Bible classes as well as science classes, and who did not pursue profits from his discoveries because believed them to be a free gift from God.

From the publisher, Kids Can Press:

This title … introduces readers to the scientist, inventor and professor who became a symbol of African American success and interracial harmony. George Washington Carver was the orphan son of slaves, but he went on to become the world-famous “Peanut Scientist.”

George invented more than 325 products from peanuts — including gasoline, shampoo, ice cream and chili sauce. Even when George was a child he was known as the “Plant Doctor” because he could make almost any plant grow. It was through his groundbreaking research in agriculture that George radically improved the lives of countless African American farmers in the southern United States.

Faith and Science in the Classroom: Class Seven – ET Evangeliation? Sacraments in Space!