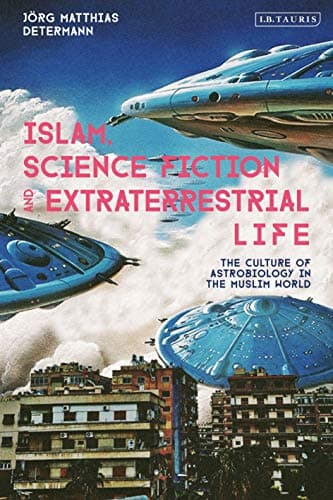 This 2021 book by Jörg Matthias Determann, published by I. B. Tauris/Bloomsbury, provides a fascinating look at the topics of science fiction and life on other worlds, each as reflected in the world of Islam, a world that many people might not typically associate with these topics. The book covers subjects ranging from scholarly theological writings on the subject of God and other worlds on one hand to the most sophomoric of science fiction tropes on the other.

The latter means that Determann’s book is not for all readers. Determann portrays science fiction from the Islamic world as capable of being every bit as cheesy, sexist, and horrific as science fiction anywhere; a description of a story by an Iraqi author about aliens that eat human couples as an aphrodisiac is not for the queasy. Moreover, Determann gives the reader very straightforward presentations of what various writers claim; the uncritical reader could see in this material endorsements of various conspiracy theories or other ideas.

Determann writes in the book’s conclusion:

Muslim-majority countries and their diasporas have established solid bases for the production of speculative texts and images of all kinds. Free thinking flourished even in very repressive and conservative contexts. More than that, authoritarian governments and Islamists were often themselves highly creative producers of futuristic visions. Lack of censorship can be helpful for movie industries and UFO religions alike. However, constraints have also been enabling in many cases too…. Products of the scientific imagination are in turn likely to feed into concrete space programmes that various Muslim-majority countries have been setting up…. Whether more ambitious projects, like the UAE’s city on Mars, will be realized remains to be seen. However, the combination of immense wealth, technological ambitions, and almost limitless imagination makes many missions conceivable. Taleb Omran’s novel The Search for Other Worlds, with its Arab spaceship heading for Alpha Centauri, could one day be more than fiction.

From the book’s publisher:

The Muslim world is not commonly associated with science fiction. Religion and repression have often been blamed for a perceived lack of creativity, imagination and future-oriented thought. However, even the most authoritarian Muslim-majority countries have produced highly imaginative accounts on one of the frontiers of knowledge: astrobiology, or the study of faith-science.

This book argues that the Islamic tradition has been generally supportive of conceptions of extra-terrestrial life, and in this engaging account, Jörg Matthias Determann provides a survey of Arabic, Bengali, Malay, Persian, Turkish, and Urdu texts and films, to show how scientists and artists in and from Muslim-majority countries have been at the forefront of the exciting search. Determann takes us to little-known dimensions of Muslim culture and religion, such as wildly popular adaptations of Star Wars and mysterious movements centred on UFOs. Repression is shown to have helped science fiction more than hurt it, with censorship encouraging authors to disguise criticism of contemporary politics by setting plots in future times and on distant planets. The book will be insightful for anyone looking to explore the science, culture and politics of the Muslim world and asks what the discovery of extra-terrestrial life would mean for one of the greatest faiths.

Faith and Science (Fiction), but Different

Other Worlds, Other Civilizations?