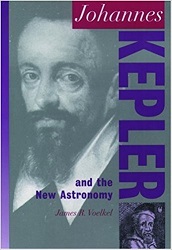 This book by James Voelkel is part of the Oxford Portraits in Science series for young adults. The general editor of this series is Owen Gingerich, a historian of science with Harvard University, and an astronomer with the Harvard-Smithsonian Center for Astrophysics. This book discusses the work and life of Johannes Kepler, one of the more prominent figures in the history of astronomy. Kepler was a deeply religious man living in a time of great religious strife. He included hymns of praise to God and prayers for Christian unity within his published works.

Johannes Kepler (1571-1630) is remembered, along with Copernicus and Galileo, as one of the greatest Renaissance astronomers. A gifted analytical thinker, he made major contributions to physics, astronomy, and mathematics. Kepler was trained as a theologian, yet did not hesitate to challenge church doctrine and prevailing scientific beliefs by supporting the theory of a Sun-centered solar system. As Imperial Mathematician to the Holy Roman Emperor, he analyzed the precise observations of the heavens that his predecessor, the great astronomer Tycho Brahe, had recorded. The book follows the ingenious scientist along the difficult pathway from raw data to his monumental discovery–the three Laws of Planetary Motion. Kepler also made fundamental contributions to optical theory, including a correct description of the function of the eye and a new and improved telescope design. His unique Rudolfine Tables, universal calculations of planetary motion, were unprecedented in their accuracy. James Voelkel vividly describes these scientific achievements, providing enough background in astronomy and geometry so even beginners can follow Kepler’s thinking and enjoy this book. Equally captivating is his account of Kepler’s tumultuous life, plagued by misery, disease, war, and fervent religious persecution.