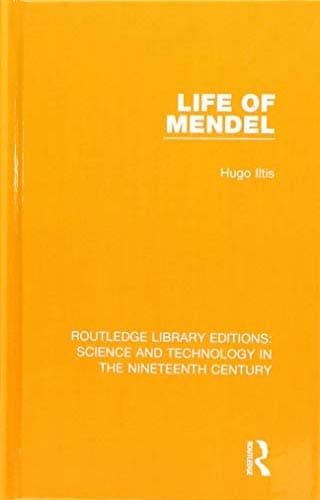 This biography of Fr. Gregor Mendel was written by Hugo Iltis in the early twentieth century (the introductory letter is dated January 1924).  Iltis laments that the records Mendel left behind “were almost exclusively concerned with concrete facts… he never kept a diary, and his letters throw little light on the inner man”, so the biography is very factual in nature.  And, given the time that has passed since Iltis wrote this biography, parts of the book are dated.  Nevertheless, the book still provides a good in-depth look at Mendel’s life and his scientific work.  Mendel, an Augustinian monk, is of course known for his pioneering work in essentially founding the science of genetics, but Iltis’s work reveals other scientific interests as well—Mendel observed the sun telescopically, for example, and kept a record of sunspots.  The academic publisher Routledge issued a reprint of Iltis’s biography in 2018.  Regarding Life of Mendel, Routledge states:

First published in 1932. The widespread influence of Gregor Johann Mendel’s work and his own remarkable destiny combine to arouse interest in the personality and the life of this investigator who, little known in his lifetime, was one of the pioneers of science. This comprehensive biography of the life and work of Mendel will be of great interest to historians and scientists.

Faith and Science in the Classroom: Class Seven – ET Evangeliation? Sacraments in Space!

O Death, Where is Your Sting? Exploring Life’s Greatest Mystery.

Curiosity and the Exploration of Mars, II