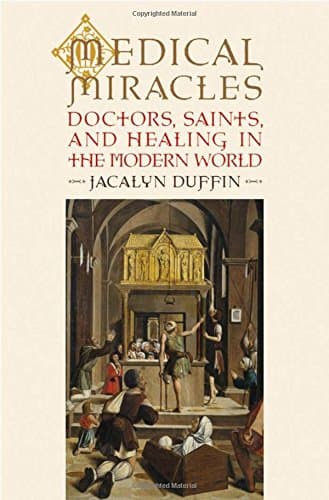 An excerpt from the 2009 book Medical Miracles: Doctors, Saints, and Healing in the Modern World, written by Jacalyn Duffin, who holds the Hannah Chair for the History of Medicine, Queen’s University, Ontario Historian and published by Oxford University Press. Duffin writes:

For doctors, the medical canon is immersed in an antideistic tradition, as described above: only nature — not God — can ever be the cause or cure of diseases. For religion, all plausible scientific explanations, be they human or natural, must first be eliminated before the case becomes a contender as a reliable sign of transcendence  or holiness. In both cases, what is left is that which is unknown; religious observers are prepared to call it God. They accept divine agency within their interpretive framework through belief in God and the inspirational nature of scripture; such faith is often described as a miracle itself. It is the source of a burgeoning, hoary literature of theological explication on such questions as “Why does God send plague?”.

But medical scientists are not prepared to attribute the unknown to God. As described above, their discomfort also arises from a kind of faith-the absolute belief in the nontranscendence of earthly events. Like those who believe in God, they believe in the existence of a natural explanation, as yet unknown but open for discovery. A commitment to this article of secular faith is found in the popular writing of atheists, who strive to contrast religion with reason. But as Mark Corner wrote, “there can be no certainty (since we obviously cannot anticipate what medical science will know in a century’s time) that a miracle has taken place. At the same time, however, there is no certainty that a miracle has not taken place”. As outlined above, only another form of belief sustains that interpretation.

Click here for a preview of this book, courtesy of Google Books.

The Bookfoxes Interview (Part I)

The Heart of Encounter: A Pastor’s Take on Pope Francis’ New Encyclical (Part One)

An Interview with The Book Foxes, Part 1

A Catholic in Space