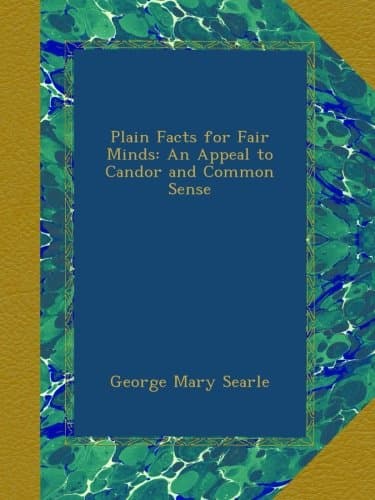 This is a chapter from an 1895 book entitled Plain Facts for Fair Minds: An Appeal to Candor and Common Sense, by George M. Searle, “Priest of the Congregation of St. Paul the Apostle; Professor of Mathematics and Astronomy in the Catholic University of America and Director of the Observatory”.  George Searle was an astronomer with the Harvard Observatory who converted to Catholicism, entered the priesthood, and then continued his scientific work at the Catholic University of America.  Fr. Searle was eventually elected superior-general of the Paulists, serving from 1904 to 1910.  Plain Facts was written for a non-Catholic audience, in a time when the status of Catholics and the Catholic church in the USA was different from today.  Fr. Searle states in the introduction to Plain Facts that the book is—

addressed principally to what are commonly called Bible Christians, who form the majority of our Protestant population, in order to show them that the Catholic religion, while thoroughly in accordance with Scripture and based on it, also agrees with reason and common sense, and has nothing to fear from the discoveries or legitimate conclusions of science; that having the historical presumption in its favor, it also in every other way satisfies the demands of the intellect, as well as the needs of the soul.

The chapter on science and the church is noteworthy, both because of the material Fr. Searle covers and because of Fr. Searle’s background and training as an astronomer, convert, and priest.  Fr. Searle’s main emphasis is to distinguish between actual scientific work itself as opposed to the use of science as an argument against religion.  He writes:

[T]he Church has no quarrel with genuine science, with that which is legitimately directed by truly scientific methods to the attainment of truth.  She cannot have such a quarrel; for she believes in the truth of what she preaches, and she knows, what all having the use of reason must know, that truth cannot contradict truth….

Nor does she prohibit any Catholics who are competent to undertake scientific investigation from doing so.  She places absolutely no obstacle in the way of their penetrating into all the facts of nature as it stands, or of their considering the probable indications as to its past history, or of their weighing actual historical testimony….

[N]o Catholic scientist well instructed in his religion finds anything in religion or science which tempts him to give up either….

The scientific enemies of religion… know that if they could beat down or really disprove one tenet of the Catholic Church, the whole structure would go to pieces.  But let me tell you that there is no danger of that; we are not at all alarmed.  The progress of science may disquiet you and make you think Christianity is untenable; that the head must abandon it, letting it take its refuge in the heart.  But we are not disquieted; we know that it has never interfered with any of the dogmas of our faith, and that it never will; and if you were Catholics, you would know the same; you would know that the Catholic religion will always satisfy the requiraements of the intellect, as well as the cravings and aspirations of the soul.