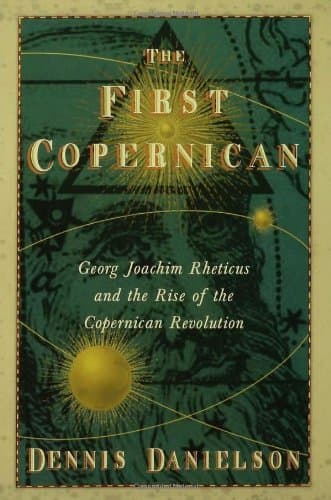 This book by Dennis Danielson tells the story of Georg Joachim Rheticus, the only person to “study heliocentrism” under Nicolaus Copernicus, and the person largely responsible for getting Copernicus’s book De Revolutionibus (On the Revolutions) published. As the book’s Prologue states, “No Rheticus, No Copernicus”. But Rheticus did not work in isolation—he was a member of a community of scholars who were motivated to study the universe. Rheticus notes:

It is absurd to presume that God the Architect established these wondrous and precisely regulated manifold motions [of celestial bodies] in vain. It is fitting therefore that we should cultivate the science of these motions… God gave the human race shadows to be schoolmistresses of these things; moreover, he gave us numbers and measures so that we might discern how great a mind has constructed this amazing machine, and so that we should seek and cherish him.

Click here to borrow an electronic copy, courtesy of Archive.org.

From the jacket cover of The First Copernican:

In the spring of 1539, Georg Joachim Rheticus, a twenty-five-year-old mathematics prodigy from Wittenberg, set off on an arduous three-week journey to northern Poland in order to meet the elderly but not-yet-famous amateur astronomer Nicolaus Copernicus. While Copernicus had yet to publish anything on the topic of a new cosmology, rumors had abounded for years about his revolutionary theory (some would call it heretical) that the sun, not the earth, was at the center of the universe, and about a manuscript he had almost completed on the subject.

Intending to stay a month, Rheticus spent three years at Copernicus’s side, during which time he sought means—both great and small—of heralding his teacher’s radiant vision of beauty: a cosmology that moved the earth and immobilized the sun. By the early autumn of 1541, the aging astronomer had completed his manuscript, De revolutionibus, and Rheticus persuaded his mentor to let him take it to a printer in Germany for publication. Though no one could have known it at the time, this action changed the course of civilization. Without the intervention of the young mathematician, Copernicus’s seminal work would likely have sunk into oblivion; instead, it ushered in a new understanding of the physical universe, and today is acclaimed as a landmark of scientific and cultural history.

The First Copernican is the first popular account of the life of Georg Joachim Rheticus—Copernican muse, founder of modern trigonometry, and champion of new science at the threshold of the modern world. Dennis Danielson’s biography provides a prism through which the dawn of the Copernican Revolution shines in fresh and illuminating ways, revealing the intense curiosity and singular community from which science itself took flight.

Copernicus’s On the Revolutions—A Book That Continues to Challenge