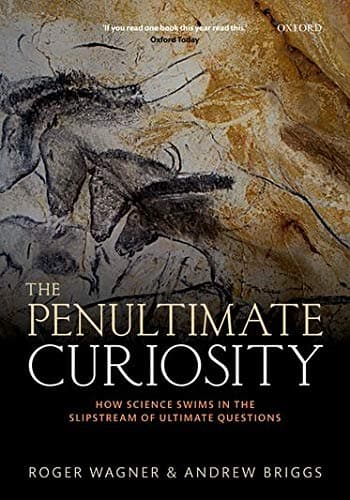 This is a book by an artist and a scientist.  The artist is Robert Wagner, who has produced several books of illustrated poems and translations of the Psalms, and created a stained glass window for St. Mary’s Iffley in Oxford.  The scientist is Andrew Briggs, Professor of Nanomaterials at Oxford, who holds degrees in both physics and theology.  The authors argue that over time, science and metaphysics have grown side by side as mankind has asked questions central to our existence.  The book, published in 2016 by Oxford University Press, discusses a wide range of historical figures, from Anaxagoras to John Philoponus to Al-Ghazali to Kepler to Maxwell to the scientists working on the Large Hadron Collider.  The use of illustrations is a prominent feature of the book.

When young children first begin to ask ‘why?’ they embark on a journey with no final destination. The need to make sense of the world as a whole is an ultimate curiosity that lies at the root of all human religions. It has, in many cultures, shaped and motivated a more down to earth scientific interest in the physical world, which could therefore be described as penultimate curiosity.

These two manifestations of curiosity have a history of connection that goes back deep into the human past. Tracing that history all the way from cave painting to quantum physics, this book (a collaboration between a painter and a physical scientist that uses illustrations throughout the narrative) sets out to explain the nature of the long entanglement between religion and science: the ultimate and the penultimate curiosity.