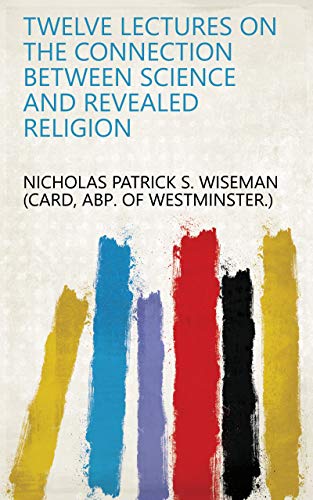 Nicolás Patricio Esteban Wiseman was Cardinal and first Archbishop of Westminster upon the re-establishment of the Catholic hierarchy in England and Wales in 1850. His discussions of religion and science in the early nineteenth century became well-known.

The complete text of Wiseman’s lectures is available from Google Books (click here).

Click here for an excerpt selected by the Interdisciplinary Encyclopedia of Religion and Science (Inters.org), which is edited by the Advanced School for Interdisciplinary Research, operating at the Pontifical University of the Holy Cross, Rome, and directed by Giuseppe Tanzella-Nitti. In this excerpt Wiseman defends Rome as a center of learning and writes of various early figures in the church who promoted the study of mathematics or the natural world, including Clement of Alexandria:

Clement of Alexandria … devoted several chapters of his learned Stromata to the vindication of his favorite studies. He observes very justly, that “varied and abundant learning recommends him who proposes the great dogmas of faith, to the credit of his hearers, inspiring his disciples with admiration, and drawing them towards the truth which is in like manner the opinion of Cicero, when he says, “magna est enim vis ad persuadendum scientiae.” Clement then illustrates his argument by many quotations from the Holy Scriptures, and from profane authors. I will read you one remarkable passage.

“Some persons, having a high opinion of their good dispositions, will not apply to philosophy or dialectics, nor even to natural philosophy, but wish to possess faith alone and unadorned: as reasonably as though they expected to gather grapes from a vine which they have left uncultivated. Our Lord is called, allegorically, a vine, from which we gather fruit, by a careful cultivation, according to the eternal Word. We must prune, and dig, and bind, and perform all other necessary labor. And, as in agriculture and in medicine, he is considered the best educated who has applied to the greatest variety of sciences, useful for tilling or for curing, so must we consider him most properly educated, who makes all things bear upon the truth; who from geometry, and music, and grammar and philosophy itself, gathers whatever is useful for the defence of faith. But the champion who has not trained himself well, will surely be despised.”

These words, I must own, afford me no small encouragement. For if, instead of geometry and music we say geology, and ethnography, and history, we may consider ourselves as having, in this passage, a formal confirmation of the views which we have taken in these Lectures, and an approbation of the principles on which they have been conducted.