I love Paris in November. It’s cool and uncrowded, and it feels like a real city not just a tourist site. I traveled there last week, via sleeper train with a private cabin: the introvert’s delight!

You know, I’d go back there tomorrow but for the work I’ve taken on

Our stats this month: As of today, we have 145 paid subscribers (two new subscribers since last month — thanks and welcome!) and 9347 people (about a 150 new ones!) who get notified of new postings. We continue to grow, but not nearly fast enough to keep us in business. (Our goal is to have a thousand paid subscribers… at this rate we’ll hit that goal around the year 2045; that at least will still be before my 100th birthday.)

Please, tell more people about our site; and if you can, please subscribe at a rate of $10 a month (about the cost of a burger and fries) or $100 per year.

So, while in Paris I ran into three famous authors, a bunch of scientists, and one or two bits of art. But then, the previous week I’d been to Scotland to “Grasp the Nettle”, and that was equally intense. (And cold and rainy.) But that’s not the only thing I’ve been up to…

November is the craziest month at the Specola. That’s when we prepare our Annual Report; when we start setting up all the events that happen here around Christmas time; and when I work on my annual Christmas letter for the Foundation (please send money!) and start planning our Foundation events for early next year, such as the annual public symposium which will be held this year on the afternoon of Friday, February 21, in Tucson.

(We traditionally have our board meeting on the last Saturday of February. Since 2020 is a leap year that would be the 29th. But Ash Wednesday is the 26th… so by moving it up a week, we can still have a nice meal on Friday the 21st! Tucson is not, shall we say, famous for its fish…)

In addition, this is an odd numbered year, which means that we are getting ready to choose the 25 students of our biennial (even-numbered years) Vatican Observatory Summer School. This year we had… 160 applicants. Twenty five spots. This is not going to be easy. But we need to make our choices, and let them know, by the end of the month.

So of course this November I have three trips scheduled over three weekends. And this, after pledging that I would cut back on travel.

Scotland… there’s a group called “Grasping the Nettle” which is an inter-religious organization set up to counter the old “science at war with religion” trope. (Indeed, what is far more common in my experience is science at war with science, but that’s a topic for another posting…)

So I agreed to attend their annual gathering in Edinburgh on November 2. And, oh, sure, speak at the science museum in Dundee the night before. And while I am at it, talk to a high school there. And how about a talk earlier that week in Glasgow at the Royal Philosophical Society of Scotland? And at the Glasgow University Memorial Chapel. And the Scottish Institute of Physics… and another high school event in Motherwell, which is just on the way… and…

(I also got interviewed by The Courier and twice by the BBC, once on radio and once on TV.) 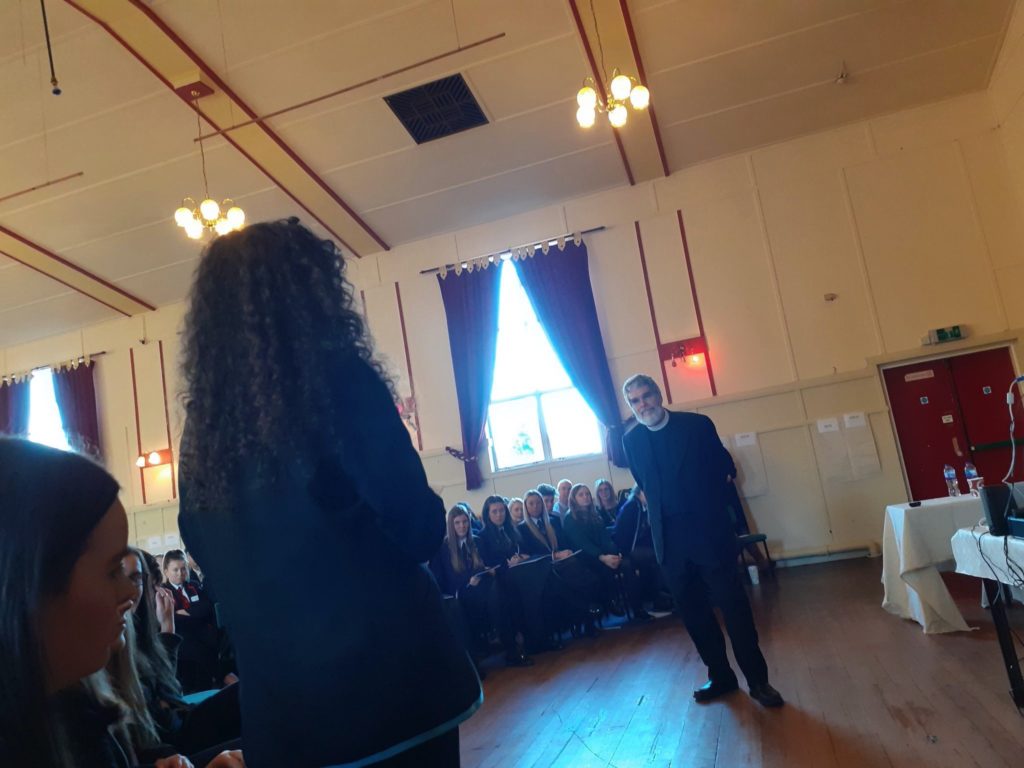 Oddly enough I didn’t take a single photo while I was in Scotland. This one of me talking to kids in Motherwell comes from one of their tweets…

I wouldn’t have missed a single talk, though. Each audience was different and fun. I got to meet the past, present, and future Moderators of the Church of Scotland, as well as our (RC) Archbishop in Edinburgh. I snuck into the back of a church for All Saint’s Day and one of the guys on the altar recognized me (and invited me for tea after Mass). I had a ride from Dundee to Edinburgh in a Nissan Leaf and got to talk electric cars with a true enthusiast. And I got to meet up with some old friends, the kind you get to see only once every four years and you worry that you won’t know what to talk about when you see them and then three hours have whooshed past full of stories and jokes and remembering all the reasons why you were friends in the first place.

Paris… I was invited to speak to the “Institute for the Physics of the Globe of Paris”. (Or the French equivalent thereof.) I was tempted to ask why Paris deserved its own Globe, but to be honest it really is a world of its own. And a beautiful one, at that.

Because of my lingering sinus issues I wanted to avoid flying; and beside, I love the train. It was the Frecciarossa (Italian high speed line) to Milan and then the Thello night train from there to Paris. I tweeted about the sleeper car and how I was looking forward to taking it; Twitter responded with helpful people telling me why flying first class was so much better (I have, it isn’t) and how the train was sure to be terribly late (I arrived exactly on time). And I read a book (Astounding by Alec Nevala-Lee, just as interesting the second time), and worked a bit on my laptop, and I slept great.

I got to IPGP that afternoon and had a tour of the labs there. It turns out that, from my past lives in the geophysics department at MIT (both as student and post-doc) and connections with my friend and co-author Dan Davis, a geophysicist at SUNY Stony Brook, I was surrounded by friends, and friends of friends.

My talk (“The philosophy of meteorites”) was well attended and people laughed at the right places. Since it was given in English, I was not surprised that most of the audience were fellow scientists, which I guess explains why they got the jokes. Dinner at a local restaurant was excellent (Paris, right?) and I didn’t get to sleep that night until midnight.

The next morning I was off to Le Figaro for an interview (as of this writing they haven’t run it yet; when they do I’ll link to it) and then lunch back at IPGP and to meet up with other geoscientists who weren’t around the previous day. That evening I had dinner with young-ish Jesuits studying theology in Paris, several in their 40’s who like me entered the order with PhDs. More stories, more mutual friends discovered.

Saturday I spent at one of my favorite places, the D’Orsay Museum (thesis: the change of style in art from 1840 to 1870 France parallels the change in pop music from 1940 to 1970 Britain), and then lunch with my geophysicist host from IPGP and his family. (I did keep thinking, their kids are younger than the grandkids of my contemporaries.)

Sunday I met up with Ada Palmer and Jo Walton, who have somehow gotten to be award-winning science fiction authors (Campbell and Hugo, respectively) since I first met them. They are also card-carrying friends of The Louvre, so we went in to visit with another old friend of theirs, a guy named Voltaire. (The statue is newly cleaned, and I have to say he looked great for someone who’s just turned 325).

Paris was also a lot of time just walking the streets, soaking up the ambience. I even went shopping. Not perfume or liquors, but I did go into the local Swiss Army Knife store.