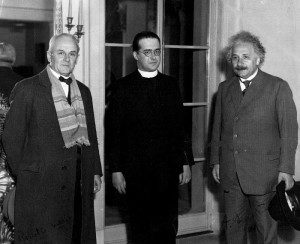 This article by astronomer Simon Mitton of St Edmund’s College of Cambridge University provides an overview of the life and work of Fr. Georges Lemaître that contains sufficient detail to satisfy the reader who has interest in Lemaître but that does not get into the level of detail found in a full biography.  The article was published in the journal The Antiquarian Astronomer in 2020. Mitton discusses Lemaître’s family and his military service in the First World War as much as he discusses his scientific work on what has come to be known as “The Big Bang Theory”.

On 1998 September 1, The Astronomical Journal published a spectacular paper announcing the discovery of the accelerating Universe…. The excitement at the time was palpable, and I vividly remember my cosmology colleagues in Cambridge exclaiming that ‘Lemaître’s cosmological constant is inﬂating the universe’. Overnight it seemed that a huge catch-up industry had sprung up, with a younger generation of cosmologists revelling in the discovery of Lemaître’s papers. Over the past two decades the historian Dominique Lambert in Louvain has provided us with a truly exceptional biography of Lemaître, while Helge Kragh of the University of Aarhus has meticulously documented the contributions of many observers and cosmologists to the foundations of the concordant cosmology that we have today. From these new assessments, we can see that Georges Lemaître, the father of the Big Bang, was arguably the greatest cosmologist of his generation.

Adam and the Big Bang

What do the Kentucky Ark and Soviet Scientists have in common? Opposition to the Big Bang Theory! (re-run)