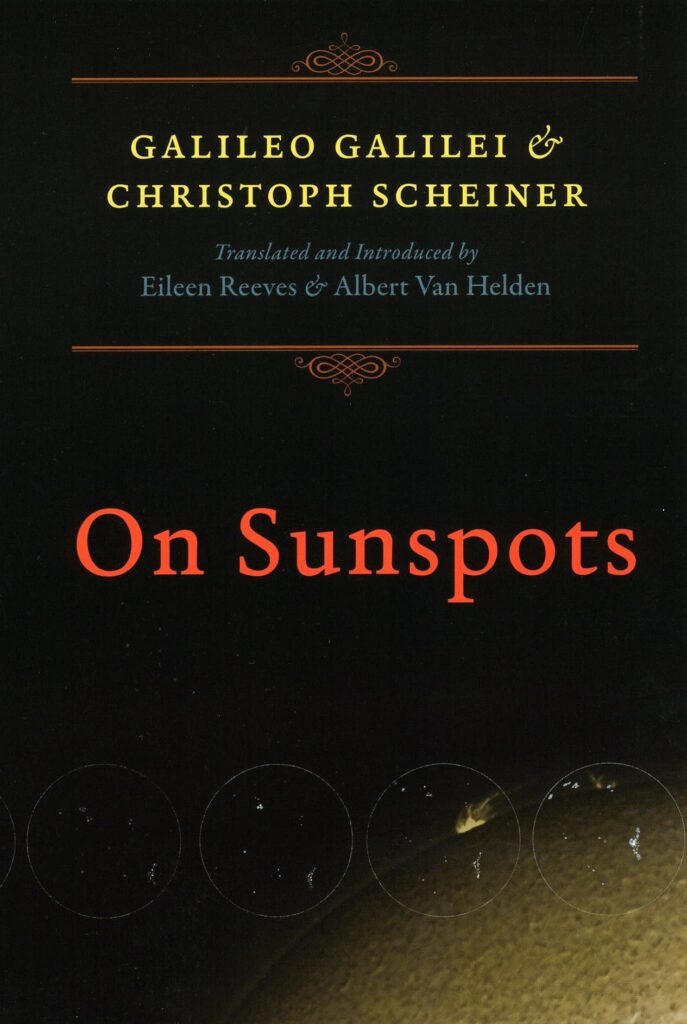 On Sunspots by Eileen Reeves and Albert Van Helden features the work of Galileo Galilei, whose fame is well-known, and of Christoph Scheiner, the Jesuit astronomer who would go on to produce detailed, groundbreaking studies of the sun that far exceeded Galileo’s observations of sunspots. This 2010 book is unusual in that it contains complete translations of both Galileo’s writing and the writing of someone he considered to be one of his opponents (in this case Scheiner). As Nick Wilding of Georgia State University stated in a review of On Sunspots, “For the first time, readers have access to both sides of this important debate in the same language. This will be an essential text.”

From the publisher, University of Chicago Press:

Galileo’s telescopic discoveries, and especially his observation of sunspots, caused great debate in an age when the heavens were thought to be perfect and unchanging. Christoph Scheiner, a Jesuit mathematician, argued that sunspots were planets or moons crossing in front of the Sun. Galileo, on the other hand, countered that the spots were on or near the surface of the Sun itself, and he supported his position with a series of meticulous observations and mathematical demonstrations that eventually convinced even his rival.

On Sunspots collects the correspondence that constituted the public debate, including the first English translation of Scheiner’s two tracts as well as Galileo’s three letters, which have previously appeared only in abridged form. In addition, Albert Van Helden and Eileen Reeves have supplemented the correspondence with lengthy introductions, extensive notes, and a bibliography. The result will become the standard work on the subject, essential for students and historians of astronomy, the telescope, and early modern Catholicism.