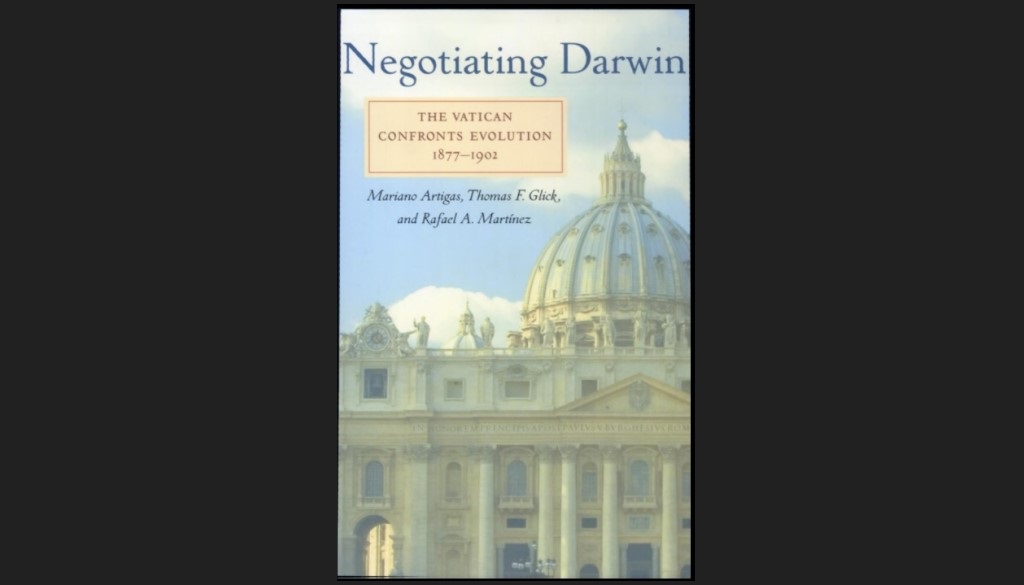 This book provides an in-depth look at how the Vatican handled questions involving the theory of evolution in the late nineteenth century.  Specifically, it looks at how the Vatican’s Congregation of the Index, which from 1596 to 1948 published the Index of Prohibited Books, handled such questions.

Negotiating Darwin was written by Mariano Artigas, Thomas F. Glick, and Rafael A. Martínez and published by Johns Hopkins University Press (2006).  The book is based on archival material from the Vatican that was first opened to scholars in 1998.  The authors frequently emphasize how what has been written about the Vatican actions during this time regarding the theory of evolution stands at odds with what is found within the archival records.  The result has been “transmitted uncritically from generation to generation”, often through textbooks, to “many generations of Catholic priests and professors across the world.”

Drawing on primary sources made available to scholars only after the archives of the Holy Office were unsealed in 1998, Negotiating Darwin chronicles how the Vatican reacted when six Catholics—five clerics and one layman—tried to integrate evolution and Christianity in the decades following the publication of Darwin’s Origin of Species.

As Mariano Artigas, Thomas F. Glick, and Rafael A. Martínez reconstruct these cases, we see who acted and why, how the events unfolded, and how decisions were put into practice. With the long shadow of Galileo’s condemnation hanging over the Church as the Scientific Revolution ushered in new paradigms, the Church found it prudent to avoid publicly and directly condemning Darwinism and thus treated these cases carefully.

The authors reveal the ideological and operational stance of the Vatican and describe its secret deliberations. In the process, they provide insight into current debates on evolution and religious belief.