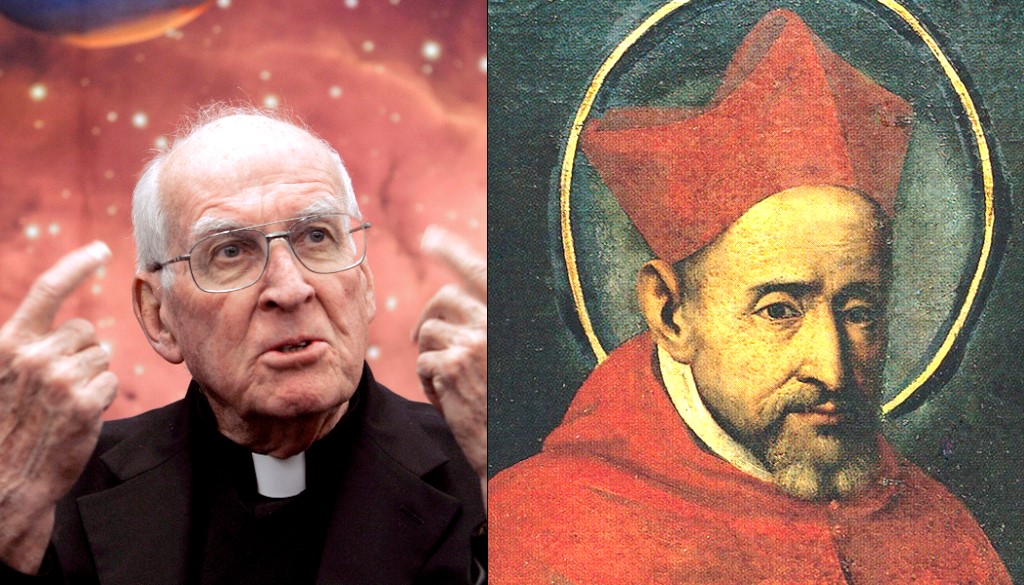 Fr. George V. Coyne, S. J. was Director of the Vatican Observatory at Castel Gandolfo in Italy and Mt. Graham in Arizona, from 1978 to 2006.  He is an important figure in V.O. history.  But, as is always the case with us human beings, he did not get everything right.  One thing he did not get right?  Bellarmine and Galileo.

And while Fr. Coyne was head of the V.O., Pope St. John Paul II created the 1980s-era “Galileo Commission” to study the “Galileo Affair”—and Fr. Coyne was made a member of that commission. You may have come across statements to the effect that in 1992 the Catholic Church formally acknowledged that Galileo was right.  This sort of statement is often found in discussions on Galileo in introductory astronomy textbooks—click here for more on that.  The Galileo Commission was involved in that 1992 action.

Recently, I edited a commemorative e-book of Fr. Coyne’s writings.  It is a cool book (you can get a copy by contributing to the V.O.’s Fr. Coyne memorial project—click here to do that).  It is cool because of all the varying stuff Fr. Coyne wrote over the decades—stuff from lunar measurements to administrative reports to discussions on faith and science to personal testimonials to science history.

But, cool as it all is, it is not all of equal quality.  No one is good at everything, and Fr. Coyne’s writings cover areas where he had great expertise and areas where he had far less expertise.  He was an astronomer, not a historian of science.  Nevertheless, he had some strong opinions about the Galileo Commission, especially where its work touched on the seventeenth-century cardinal Robert Bellarmine, who played a big part in the story of the Galileo Affair.

Fr. Coyne was not enthusiastic about what came out of the Galileo Commission.  He lays this out clearly in an essay on “The Church’s Most Recent Attempt to Dispel the Galileo Myth”.  Here he notes that in an October 31, 1992 address to the Pontifical Academy of Sciences, John Paul II described the Galileo Affair as a “myth”.  Coyne writes—

A myth it may be. Or it may be a genuine historical case of a continuing and real contrast between an intrinsic ecclesial structure of authority and the freedom to search for the truth in whatever human endeavor, in this case in the natural sciences.

Coyne also notes an address by Cardinal Paul Poupard (who in 1990 had been asked to coordinate the final stages of the work of the Commission) that preceded the Pope’s  address.  In this address, Poupard asserted that Galileo did not have proof for the earth’s motion.  But Coyne writes that proof—

did not matter; neither in 1616 nor in 1633 was any science discussed. It was principally for Scriptural considerations and also thanks to philosophical convictions, that Copernicanism was condemned. Galileo’s telescopic observations of the phases of Venus, of the satellites of Jupiter, of the sequential motions of spots on the sun, etc. were completely ignored.

Coyne is incorrect here.  In both 1616 and 1633 we can find church figures connected with the Galileo Affair bringing up science.  Meanwhile, telescopic discoveries like the phases of Venus, the satellites of Jupiter, and the spots on the sun were not relevant.  Yes, they undermined old ideas about the cosmos that dated to Aristotle and Ptolemy, but they were fully compatible with newer geocentric world systems such as that developed by Tycho Brahe.  Pope Urban VIII, who was the driving force behind the trial and condemnation of Galileo in 1633, once wrote a poem that praised Galileo for his discoveries, specifically citing the Jovian satellites and the spots on the sun.  These discoveries did not show that Earth moved.

Coyne has some words for Bellarmine when the subject is Galileo’s discoveries.  Pope John Paul II in his address had pointed to Bellarmine in a favorable manner.  Coyne notes that John Paul “offers an interpretation of Bellarmine’s Letter to Foscarini in which two conclusions are derived which appear to make Bellarmine both the most open-minded of theologians and a scholar respectful of science”—conclusions Coyne does not agree with.  Bellarmine wrote the letter to Foscarini in April of 1615.  In it, Bellarmine famously demanded that hard evidence in favor of heliocentrism be produced prior to any re-interpretation of the Bible’s references to Earth’s immobility or the sun’s motion as referring to only appearances rather than to actualities:

I say that if there were a true demonstration… that the sun does not circle the earth but the earth circles the sun, then one would have to proceed with great care in explaining the Scriptures that appear contrary, and say rather that we do not understand them than that what is demonstrated is false.  But I will not believe that there is such a demonstration, until it is shown me.  Nor is it the same to demonstrate that by supposing the sun to be at the center and the earth in heaven one can save the appearances, and to demonstrate that in truth the sun is at the center and the earth in heaven; for I believe the first demonstration may be available, but I have very great doubts about the second, and in the case of doubt one must not abandon the Holy Scripture as interpreted by the Holy Fathers.

Coyne argued that Bellarmine was not truly interested in such evidence and would not have been persuaded by it.  Citing Bellarmine’s statement that “I will not believe that there is such a demonstration until it is shown me,” Coyne wrote in a 2011 essay titled “Galileo and Bellarmine” that—

Other authors assess Bellarmine differently.  Historian David Wootton, for example, has written that Bellarmine was not advocating a ban on the discussion of heliocentrism and was prepared to accept that it could be demonstrated to be true.  And Bellarmine himself had stated that evidence could indeed supersede Scripture in astronomical matters.

Decades before Bellarmine became involved with the debate over heliocentrism, he had argued in his Louvain lectures that Scripture suggested that celestial bodies were not carried by any celestial machinery, but rather moved autonomously, “like the birds of the air or the fish of the water.”  This was contrary to then-standard astronomy: Christopher Clavius, S.J., in his widely used astronomy text, specifically said that celestial bodies do not move like birds or fish.  However, Bellarmine granted that, while Scripture seemed to support autonomous motion,

If then one ascertained with evidence that the motions of the heavenly bodies are not autonomous… one would have to consider a way of interpreting the Scriptures which would put them in agreement with the ascertained truth: for it is certain that the true meaning of Scripture cannot be in contrast with any other truth.

In other words, proof mattered: if the study of the natural world turns up hard evidence for something that appears to contradict scripture, then theologians will have to figure out how to reinterpret scripture.  This is just the opposite of the sort of sentiment that Coyne attributes to Bellarmine.  What is particularly interesting about this is that it was Fr. Coyne, along with the historian Ugo Baldini, who uncovered and published these Louvain writings of Bellarmine.  Coyne’s work suggested that Bellarmine was not the kind of guy Coyne said he was.  Figure that one out, O Reader of Sacred Space Astronomy!

Nevertheless, let us imagine that in 1615 Bellarmine was exactly as Coyne imagined—adamant that no evidence could demonstrate the veracity of heliocentrism.  Coyne still would not really be correct in his assessment of Bellarmine.  The heliocentric universe that Coyne’s Bellarmine probably had in mind when he expressed skepticism toward heliocentrism in 1615, and eventually stood against it in 1616, would have been Johannes Kepler’s giant stars universe.  As I have discussed previously on Sacred Space Astronomy, observations of the stars in this time seemed to indicate that the universe consisted of one single, brilliant sun, which was surrounded by a sphere of much larger, much dimmer stars—a universe that many astronomers found absurd (indeed, Galileo in his Dialogue of 1632 describes such a universe as absurd).  And Kepler’s universe is what Bellarmine would have gathered from Jesuit astronomers.  Even if Bellarmine stood convinced that no demonstration of heliocentrism was possible, the heliocentrism he would surely have had in mind was Kepler’s universe—which indeed turned out to be “false”—not our modern view of the universe.

In the “Church’s Most Recent Attempt” Fr. Coyne writes of “inadequacies” in the addresses given by the Pope and the Cardinal, and he has many frank words regarding these inadequacies and the work of the Commission.  However, his own analysis has inadequacies.  His analysis of Bellarmine is one place where those inadequacies really show.

Why does this matter?  Because, he was Director of the Vatican Observatory at Castel Gandolfo in Italy and Mt. Graham in Arizona, from 1978 to 2006, and an important figure in V.O. history.  Sometimes, he is cited regarding Galileo, Bellarmine, and the Galileo Commission, to show just how inadequate the work of the Commission was—after all, the Vatican’s own Fr. Coyne said so.  But, as is always the case with us human beings, he did not get everything right. His say so was not the last word on Bellarmine and Galileo.