I was happy to report a few days ago that the news about the demise of the Vatican Advanced Technology Telescope (VATT) in a fire on Sunday June 18 had been exaggerated.

The good people at the site informed me that the VATT appeared unharmed but I was still a little uneasy. I knew that there had been a lot of heat and even more smoke. The heat could have damaged the dome. If the dome’s roundness had been compromised, it would have lost its ability to rotate freely. If the smoke had deposited conductive soot on the electronic circuit boards and corrosive tar on the coated optical surfaces, it would have made us expend considerable resources on cleaning, testing, recoating and recommissioning. I feared that months of diligent work lay before us.

The only way to restore my peace of mind was to hasten to the VATT and assess the damage. But how?  I made some preliminary arrangements to go to Mt Graham on Friday June 23 but I had to postpone the trip because there were fires by the roadside. 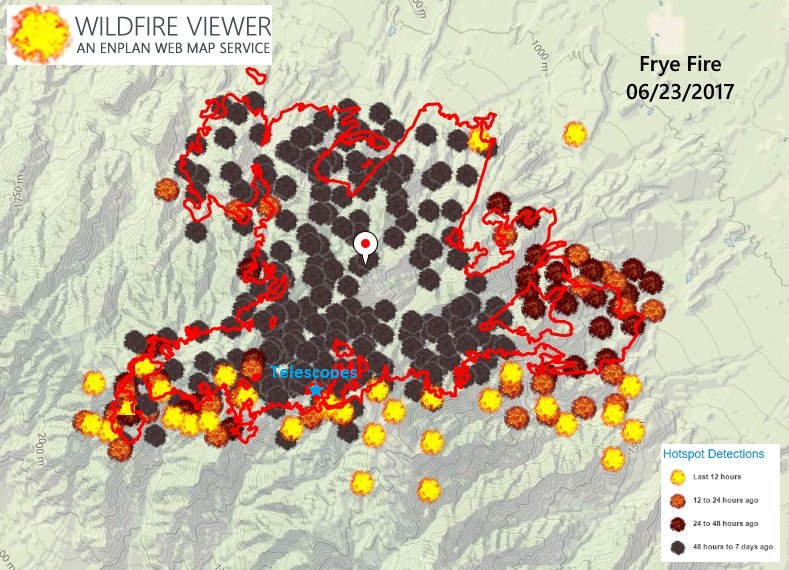 Area of the Frye Fire (red boundary) with hotspots (legend in the image) on Friday June 23. (Courtesy of Wildfire Viewer.)

The first window of opportunity opened on Tuesday June 27, and we took advantage of it.

On Sunday June 25, the coordination of the firefighters’ efforts transitioned from a Type 2 Incident Management Team (IMT) to a Type 1 IMT. This means that the fire is now officially recognized as an emergency requiring the deployment of resources at the highest level. The transition is a sign that the fire is growing, and that is obviously a cause for concern. On the balance, however, I think that although the surface area involved is objectively greater than before, the transition primarily marks an improvement because the Type 1 IMT can call upon even more resources than Type 2 IMT.

Regarding our little expedition, I was concerned that the transition might create an extra delay. MGIO director Eric Buckley had spoken with the Type 2 IMT about our trip last week. When would he manage to get through to the Type 1 IMT? It turned out that everything went smoothly and Eric conveyed the IMT’s green light to me on Monday afternoon.

Last week’s planning had paid off because our small group was ready to go at short notice. VATT’s acting principal engineer Chris Johnson and I went to the MGIO Base Camp from Tucson, arriving at 6:40 am on Tuesday. We were joined in short order by VATT’s general maintenance manager Gary Gray who lives in Safford, and by Lou Hardin, adjuster for Travelers Insurance and a retired fire captain who came from Phoenix. We took two vehicles. The MGIO custodians drove in a third. We were all escorted by Sgt Wade Boltinghouse from the Mt Graham Unit of the University of Arizona Police Department who negotiated our passage through the checkpoints along the way.

We saw many firefighters having their morning briefings as we drove up the mountain after 7am. There were few smoldering fires along the road. At such an early hour there was no wind and the fires we saw were small.  Some parts of the forest were burned completely, some were affected only partly and some were intact.

Once we reached the last switchback on the MGIO Access Road, we started to see the devastation caused by the conflagration on June 18. Looking right from our vehicles we saw that the forest in the area to the southeast of the road had been reduced to black stumps. 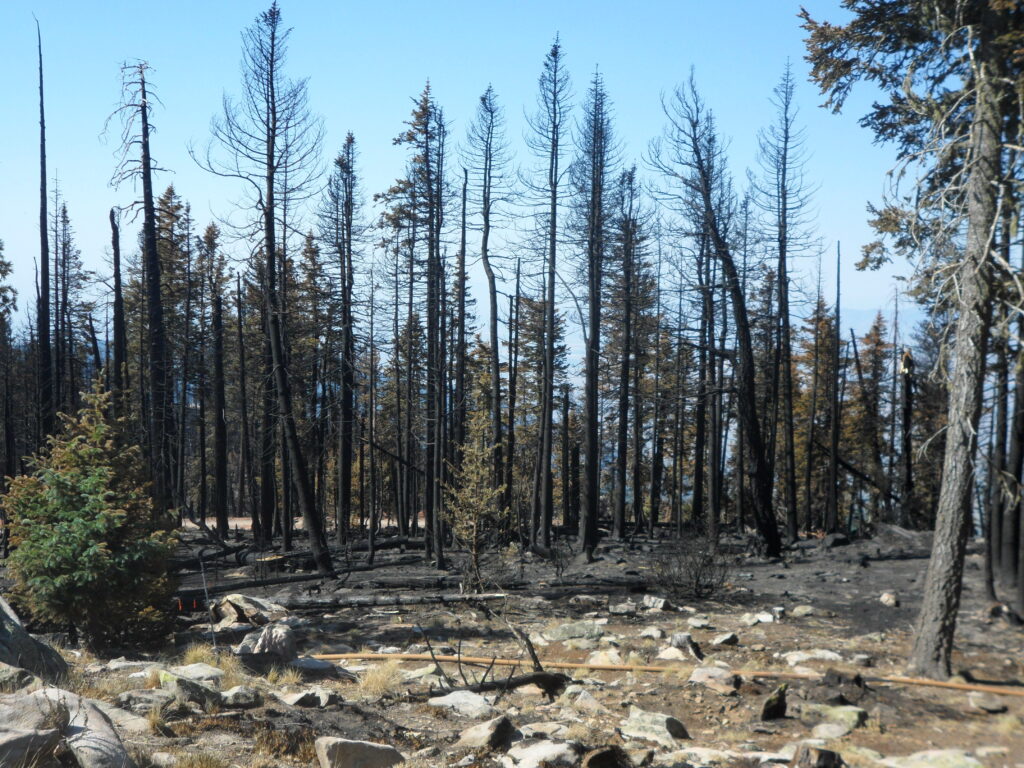 The view towards south-southeast from the foot of the microwave communication tower.

When we reached the VATT’s building, we first walked around it. It is covered with pinkish dots left by droplets of the fire-retardant slurry but there is no soot on the walls and no sign of heat damage (discoloration or deformation) anywhere, including the dome.

Let me note that the VATT has not received the fire retardant slurry directly. What we see on the building is the result of droplets carried by the wind. The reason why there was no direct deployment of the retardant on our building provided by Eric Buckley in his report sent out on June 19 is quite terrifying:

The site was bombed directly with slurry and most of the perimeter as well. I believe the only side that did not receive slurry is the east side by the VATT as the fire was burning too intensely for the bombers to drop there at the time. 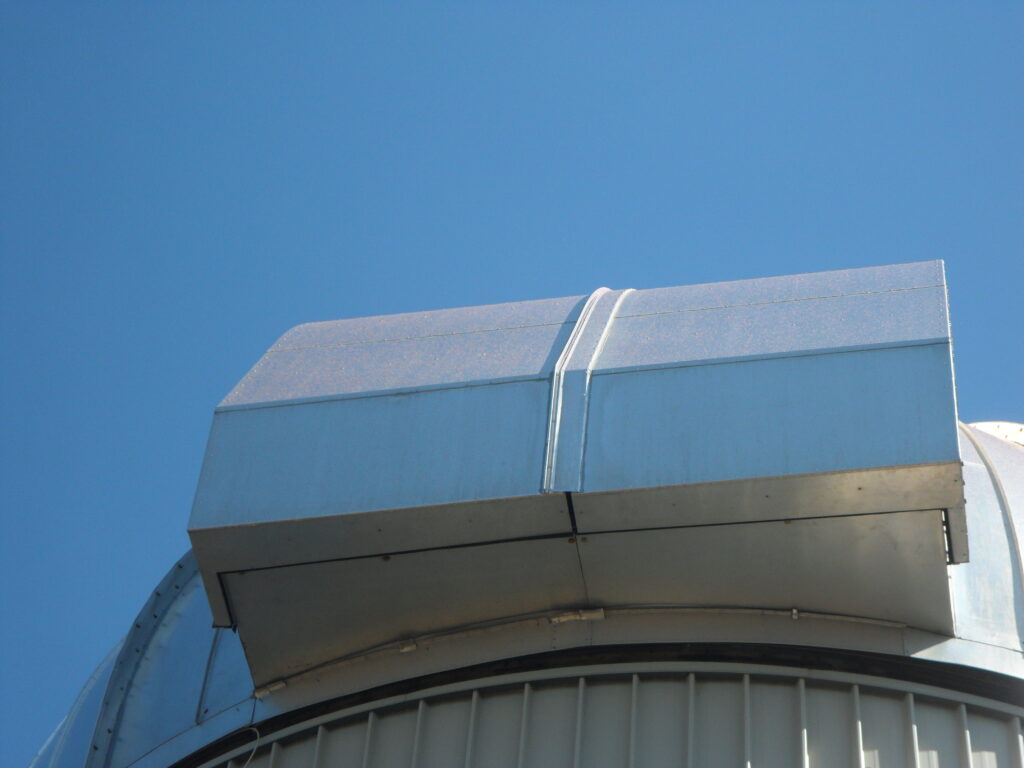 The dome slit faced south during the fire, overlooking an area of intense heat (cfr. next photograph). Note the absence of any sign of damage except for the fine layer of fire retardant (pink).

The dome slit faced south (its default position during the shutdown procedure) during the fire. This meant that, during the fire, it was overlooking an area where the blaze was particularly fierce. But in spite of that an inspection from the ground identified no signs of damage. 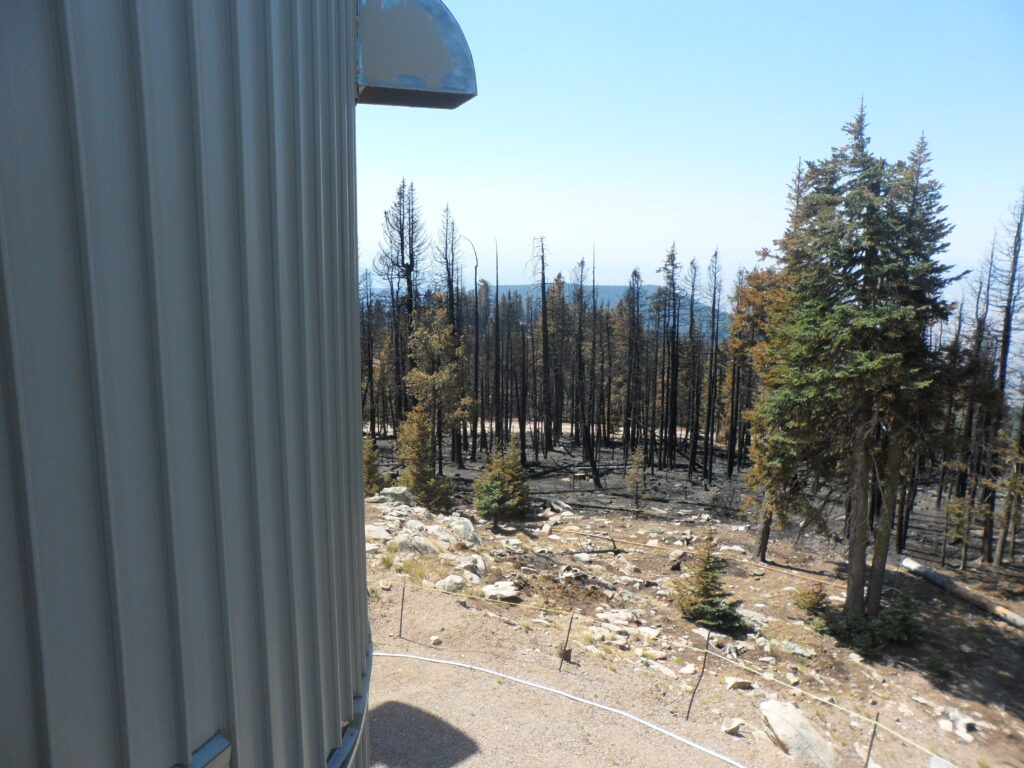 View from the SW balcony off VATT’s control room towards the south-southeast. An intense blaze devastated the trees as close as 50 ft from the foot of our building.

The air on the mountain smelled of smoke, and by the time we entered the VATT building, we had become mostly immune to the smell. The interior of the building was noticeably more fragrant despite the fact the windows and balcony doors had been open for several days. To my great surprise, however, the walls bore no sign of dirt and discoloration.

The control room was in good order as all of the interior spaces but the equipment on the SW balcony off the control room is covered with the fire-retardant slurry. 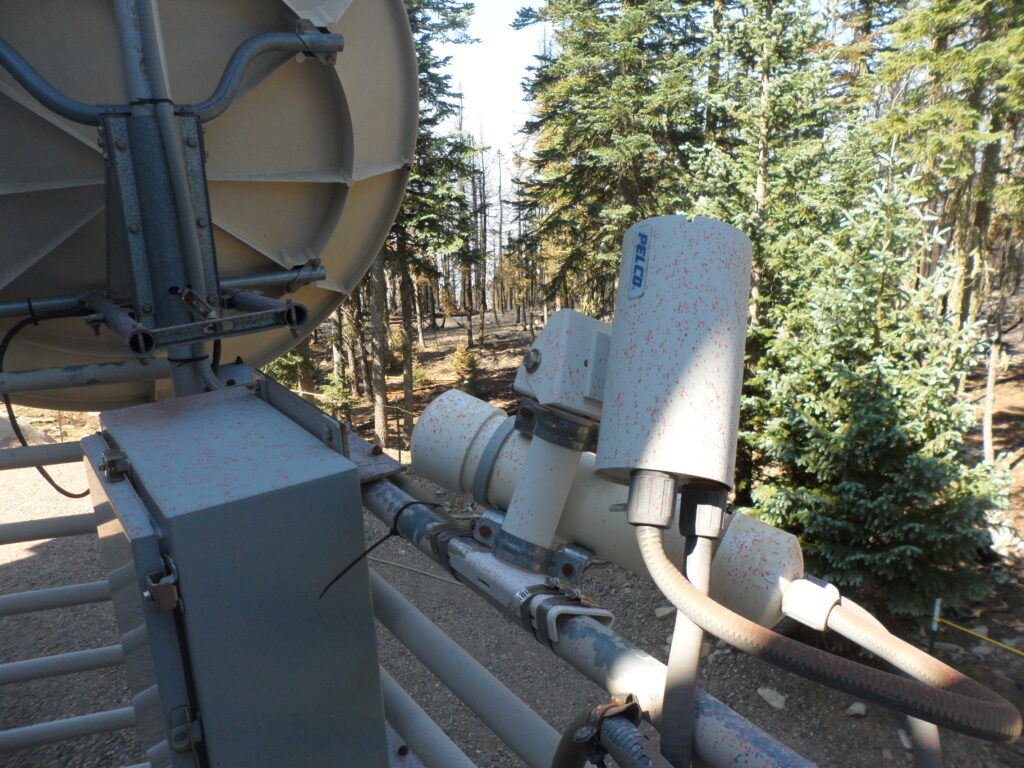 Equipment on the SW balcony off VATT’s control room. Note the fire-retardant stains.

A similar description applies to the equipment on the roof. Lou Hardin told me he would report to Travelers that power-cleaning of the entire building exterior would be justified, as well as specialized cleaning of the instruments mounted on the outside of the building. 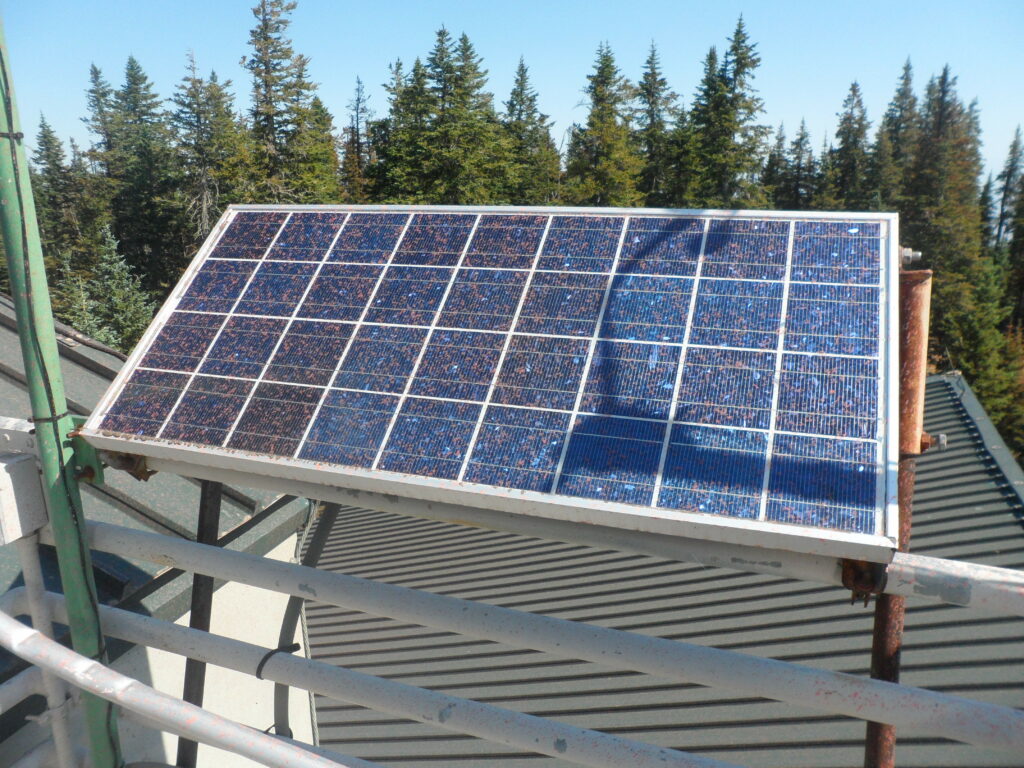 Fire-retardant slurry on the equipment on VATT’s roof.

Fortunately, this particular fire-retardant mixture is water soluble and contains no adhesive admixtures.

We performed a cursory inspection of the integrated-circuit boards in the open rack in the VATTEL room finding no sign of smoke contamination. I was very relieved.

In the dome, the telescope was fixed in the maintenance position, and the wooden access platform was in its place on the struts, bearing witness to the state in which Gary left it prior to the evacuation on Friday July 16. Gary had done so in order to cover the secondary mirror with a tarp. I am very grateful to Gary for his quick thinking under stress. 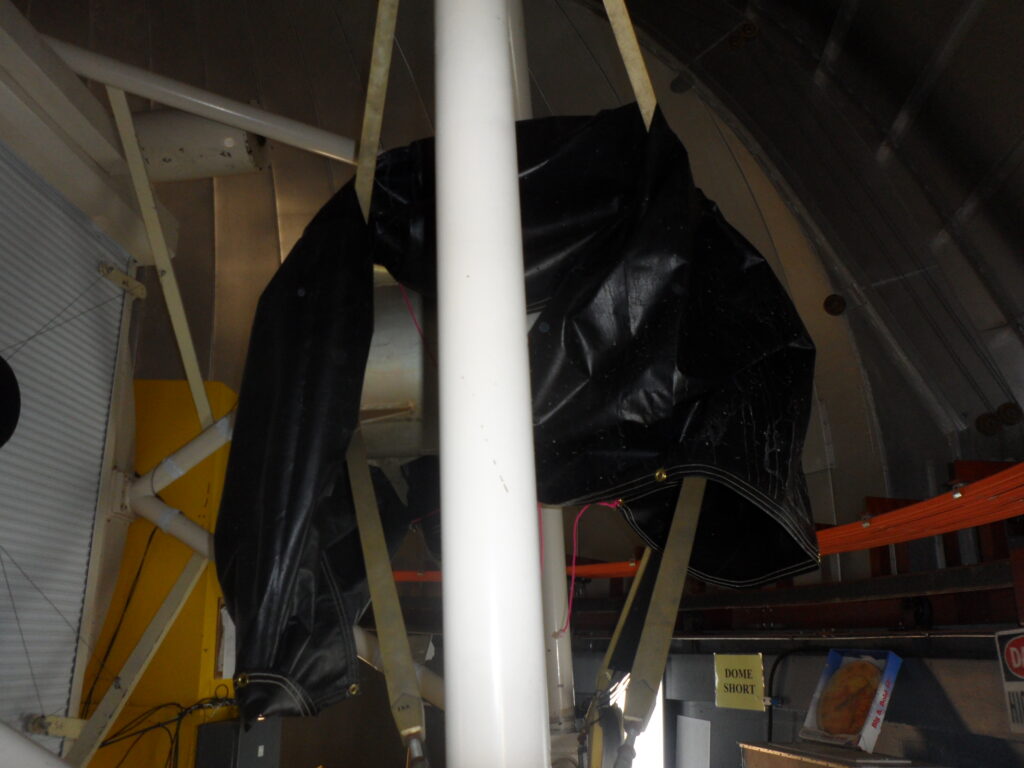 VATT survived the conflagration on June 18 in this position with tarp over the secondary mirror.

The only sign of fire inside the dome were a few hundred charred pine needles. 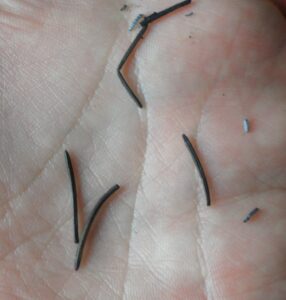 We opened the mirror cover of the primary mirror and inspected it. I am very happy to say that it appears no dirtier than usual at this time of the year. 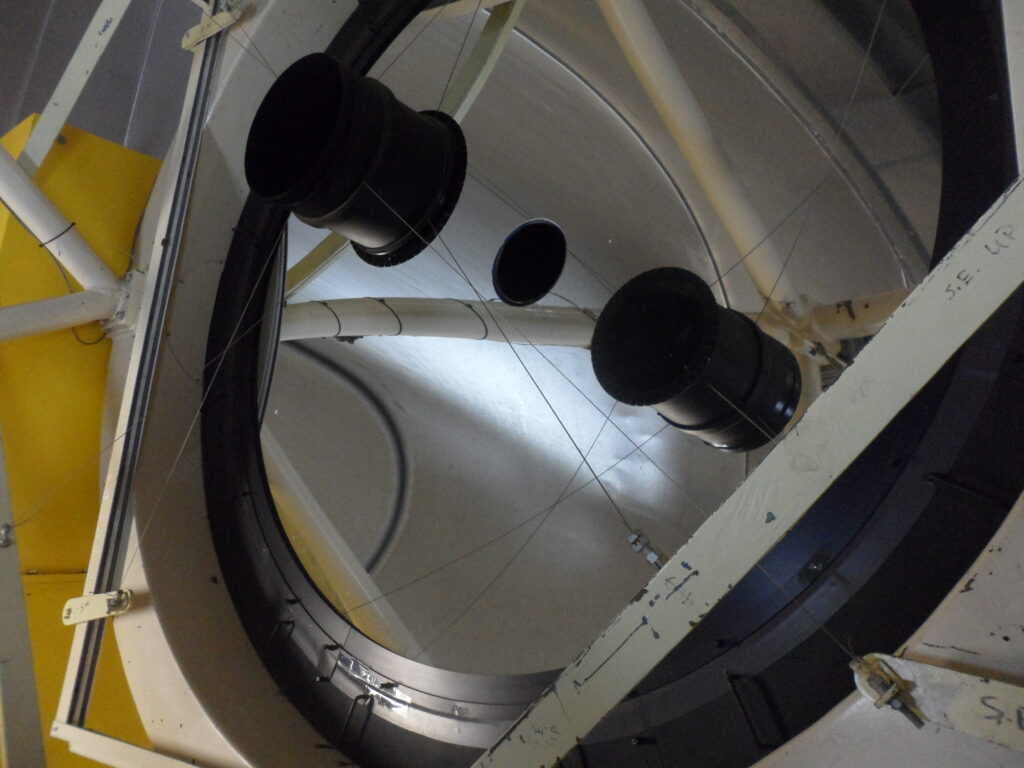 VATT’s primary mirror on June 27, 2017. It appears dusty but not more than usual at this time of the year.

We did not take the tarp off the secondary mirror. We shall be replacing its hexapod precision positioning system in the coming weeks with this one (delivered to us on May 10).

Physik Instrumente H-824 hexapod delivered to us on May 10. Fortunately, it is still in Tucson.

As a preliminary to that operation we shall document the state of the secondary mirror and of its current positioning system and determine whether there is a need to clean or recoat the mirror.

VATTspec remained mounted on the telescope during the fire. We dismounted its camera and inspected the interior surfaces of the spectrograph. There is no sign of contamination.

Driving down the mountain after 1pm we saw numerous spot fires along Arizona SR 366 with many fire crews tending them. Some were directly by the roadside. The flames were noticeably larger than in the morning, no doubt because there was some wind. Many trees have toppled over, and many more will do so in the future, creating additional hazards to traffic and accessibility, particularly dangerous when fast response or evacuation is required. I have to confess that I felt a relief when we were safely down at the MGIO Base Camp.

Considering the fire on Saturday June 17, 2017, just 200 ft to the north of the utilities building (photographs below) and the extremely close proximity of the devastating fire on Sunday June 18, with the main blaze less than 50 ft from VATT and some spot fires within 25 ft, in conjunction with the conspicuous absence of damage, it is my considered opinion that the VATT had a miraculous escape, thanks to the valiant efforts of the firefighters who, especially on June 18, had to respond very fast, deploying considerable resources to protect our facility. Thank you!

I would also like to express my special gratitude to the MGIO crews who tirelessly hauled water up the mountain for MGIO’s peripheral sprinkler system and bravely kept a dedicated watch over the astronomical facilities on Mt Graham.

Last but not least, I would like to thank Eric Buckley whose diplomatic skills allowed us to visit the site in a narrow window of opportunity. We were the first non-essential personnel on Mt Graham and it seems likely that we shall remain the only ones for a few more days.

Frye Fire continues to burn and the area affected keeps growing. Let us continue to keep the firefighters and their safety in our thoughts and prayers. 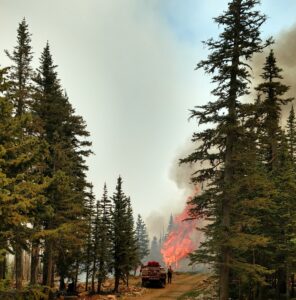 Early stages of the fire to the north of the utilities building on June 17, 2017. (Photographs courtesy Doug Roden and Gary Bowman.) 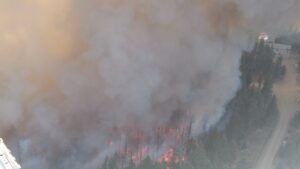 The conflagration to the south of the MGIO site on Mt Graham on Sunday June 18, 2017. VATT in upper right. 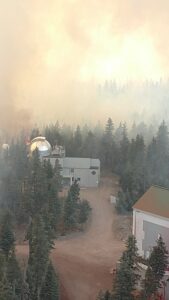 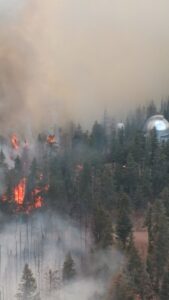