Skip to content
I have a great admiration for Kepler, and the pedantic text that follows should not be taken as a complaint addressed to the great Imperial Mathematician but rather as an expression of my frustrated ignorance. You see, Kepler had an excellent knowledge of Greek. He published several of his Latin translations of Greek books. My Greek is very superficial but today, sadly, little suffices to makes me more informed than most. The most conspicuous problem is that Kepler sometimes included Greek words in his book titles.
Let us start with the most straightforward of Kepler’s (more or less) Greek book titles. 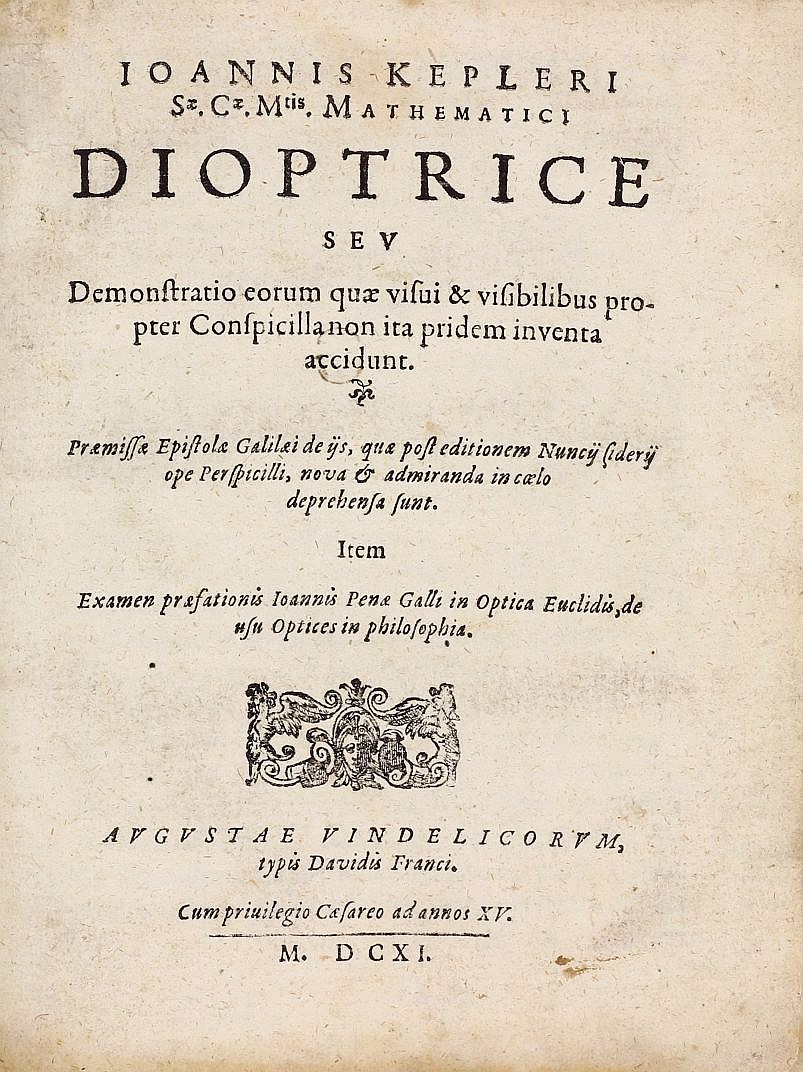 The core of the book title is the word Dioptrice. A casual reader might pause momentarily, confused by the –e ending. Assuming the word is Latin, the –e ending would be the 3rd-declension ablative case dioptrīce from a presumed feminine noun dioptrix, -īcis, abl. -īce or the adverb dioptrĭce from a presumed adjective dioptrĭcus, -a, -um. In both cases the final vowel is short. [This brings us the word’s pronunciation in Kepler’s time. If you assumed dioptrice was Latin then you would use the German pronunciation of the Latin ce, which has been tse (as in the tsetse fly) for centuries, and you would opt for a short vowel in the ending. If you thought it was Greek than you would read the Latin letter c as a transliterated Greek letter kappa, and a long vowel in the ending, considering it a transliterated eta: Dioptrikē.]
Obviously, neither an ablative nor an adverb make sense in the context. The context dictates that the word must be in the nominative case. This is only possible if the word is Greek. A few pages further, as if to dispel last vestiges of doubt that this is indeed a transliterated Greek word, Kepler’s Preface is entitled, Ioanni Kepleri in Dioptricen Praefatio… The Greek accusative ending -ēn (-ην) is unmistakable.
One might object, “The word may be of Greek origin but Latin assimilated many Greek words, applying Latin endings to them. Why not dioptrica?” Indeed, when nouns are used in sentences, in an inflected language this means using case endings. You could use the original Greek ones or, more naturally, you could use the Latin ones. The former gives the appearance of erudition, flaunting your Greek. The latter is less confusing, and more considerate towards less erudite readers, sparing them the decryption efforts described above. Although, an author solicitous of his reader’s wellbeing may have opted to use the Greek alphabet, Διοπτρική.  Kepler himself did so on the title page of his New Astronomy, 1609 (more on this below).
Do not regard a Greek word with a Greek ending in a Latin text as a particularly obnoxious affectation, however. It probably was no more pretentious than normal and expected. A certain flashiness of style went with the territory in his day and age. One’s mastery of Greek in particular was to be at least hinted at, considering that Renaissance humanism was born thanks to the rediscovery of ancient Greek texts.
The main point, however, is that there was no genuine Latin alternative. In ancient times, scholarly writing was universally conducted in Greek even by Romans. The Roman Emperor Marcus Aurelius wrote his 12 books of Meditations in Greek. Among the innumerable examples of this phenomenon my personal favorite is the Emperor Claudius, scion of one of the oldest Roman families. Livy, arguably the most influential Roman historian, the paradigm of Roman patriotic, “heroic” historiography, who fixed the ultimate form of the Roman foundation myths, was Claudius’s personal tutor. (Livy, dedicating his works for the edification of the Roman general public, wrote in Latin.) Claudius, a Roman patriot, Livy’s student, wrote his Tyrrhenica, a twenty-book Etruscan history, an eminently Italian topic — in Greek. As for scholarly texts in applied mathematics, they were all in Greek without exception, and advanced mathematical and astronomical terminology was Greek. Kepler laments (in Latin) in the very first paragraph of his Introduction to Astronomia Nova that

…the reading [of rigorous mathematical texts] is most tiresome, especially in Latin, which lacks the articles and that gracefulness possessed by Greek…

What exactly is dioptricē or rather what is denoted by the Greek substantivized adjective ἡ διοπτρική?

Harmonics, in plural. A theory or system of musical sounds or intervals; that part of acoustics which relates to music. (rarely in singular.) Obsolete except in reference to ancient systems.

As we have seen, Kepler was prone to use Greek in book titles and elsewhere, sometimes using the Greek alphabet, sometimes using Roman-style transliteration of Greek with the Latin script. The book title in question is our second example of this phenomenon.
The Greek word for harmonics (theory of harmony) is harmonikē (ἁρμονική), and its genitive case is harmonikēs (ἁρμονικής). I used here a less ambiguous transliteration of Greek than the one used by Kepler. Like ancient Romans, Kepler transliterated kappa as c, and both epsilon and eta as e.
Thus we have determined that the word harmonicēs in Kepler’s overall Latin title is a transliterated Greek genitive singular of a Greek word.  The book’s title may be translated as “Johannes Kepler’s Five Books of World’s Harmonics,” which I prefer to the same with the preposition “on,”  “Johannes Kepler’s Five Books on the Harmonics of the World.” The preposition “on” would have been appropriate had Kepler’s title been J. Kepleri de Harmonices Mundi Libri V. He chose not to do use the preposition de. By using a simple genitive he indicates that his work is not just about this new science; the book is this new science, viz., “cosmic harmonics” or “world’s harmonics.”
Matters have been straightforward so good. Problems come when abbreviating Kepler’s title, and using just its core because the book’s Greco-Latin title proper in the nominative case (and using the Roman transliteration of Greek as Kepler did) is Harmonice Mundi pronounced Harmonikē Mundī with a hard kappa (and without the sigma which belongs to the genitive).
The fully Latinized (as opposed to merely transliterated) form of the Greek word harmonikē is “harmonica” (similarly optikē gives optica). Sadly, harmonica can be easily confused in modern English with a homonym designating a mouth organ. Undaunted, some scholars use such a fully Latinized version (in the nominative case), Harmonica Mundi.  We have seen that in the case of Dioptricē Kepler had little choice but to use the Greek ending. Here, however, I believe he could have chosen the perfectly good Latinized form, Ioannis Keppleri Harmonicae Mundi libri V, rather than inserting a Greek genitive in a Latin text, to the confusion of an unworthy posterity sadly lacking in classical studies…
The following post will be about Astronomia Nova.