I am pleased to have a guest blogger this week: Timothy Dowling, who is giving us his perspective on the August 21, 2017 eclipse as seen from Hopkinsville, Kentucky.  He is a professor at the University of Louisville in the Department of Physics and Astronomy. His area of research is planetary atmospheric dynamics.  He and his students analyze Voyager, Galileo, Cassini and Hubble Space Telescope data of the gas giants. Dowling is the lead author of the EPIC atmospheric model, which is used by NASA and researchers around the world to model the weather on Jupiter, Saturn, Uranus and Neptune.  He has appeared in science documentaries about planetary weather on the National Geographic, Discovery and History Channels.  He is married to Prof. Beth Bradley of the UofL Mathematics Department.  They have two daughters, and are parishioners of St. Michael Catholic Church in Louisville.  Prof. Dowling and Vatican Observatory Director Br. Guy Consolmagno have a poster presentation at the American Astronomical Society Division of Planetary Sciences meeting in Provo, Utah this October.  The title of their presentation is: “2017 Solar Eclipse in Hopkinsville, KY: E/PO Feedback from Two Venues”.

Today is Labor Day in the U.S., two weeks after the 21 August 2017 total solar eclipse, and a couple days after tropical rainstorm Harvey paid Louisville, KY a visit.  I am jotting down a few memories from the Great American Eclipse of 2017, given my perspective as the only professional planetary scientist in Kentucky.

My worthy professional galactic and extra-galactic astronomy colleagues and amateur astronomers in Kentucky outdid themselves with eclipse educational and alumni outreach, school visits and interviews, and fanned out between Paducah, KY and Nashville, TN for the eclipse itself.  Fools rush in where angels fear to tread, and to a person they all made sure not to venture anywhere near Hopkinsville, KY, and all had Plan-B sites lined up in case clouds started to roll in, a distinct possibility in late August in southwestern Kentucky.

Meanwhile, for this adopted son of Kentucky, it was Hopkinsville-or-Bust, a fool’s errand!  But I survived to tell the tale, which starts a few months before the eclipse.

As is well known, rural southwestern Kentucky was ground zero, with Hopkinsville identified a decade ago as the largest town in the region of global maximum totality.  Consequently, the Kentucky Division of Emergency Management (KYEM) took the lead in organizing behind-the-scenes support.  A few months before the eclipse, the KYEM Director, Michael Dossett, contacted Joe Sullivan, his liaison at the National Weather Service (NWS) Louisville office, for a suggestion for a subject matter expert (SME). Joe gave him my name—I started the atmospheric science program at the University of Louisville back in 2008—and I jumped at the opportunity.   The NWS Louisville office, led by John Gordon, has been a tremendous help to our program, which is now entering its 10th year.

Partnering with the KYEM was a great deal of fun.  Director Dossett and I made two short videos for the KYEM Eclipse 2017 webpage, highlighting the science and proper viewing strategies, and Dossett and Sullivan made a third video that discusses the tools the NWS uses to forecast cloud cover.  The 100,000-student Louisville public school system also worked with us to alter their day, since school dismissal was 4 minutes before the center of the 96% eclipse in Louisville (they extended the day by 21 minutes and had eclipse glasses for everyone). 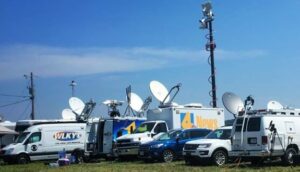 A sampling of the several dozen TV-satellite trucks at the Hopkinsville VIP/Media area.

Turning Hopkinsville into “Eclipseville” was a major effort that spanned several years, and Brooke Jung spearheaded this work.  She organized several major viewing areas, complete with guaranteed parking, unobstructed viewing, shelter, and food and drink vendors, and she organized promotions, websites, and a VIP/Media area.

Hotels were sold out months in advance in the Hopkinsville area, and at a premium, but fortunately, KYEM put me up the night before the eclipse in a National Guard training facility 45 minutes north of Hopkinsville, which is also where they staged some of their behind-the-scenes logistics.  In the parking lot at the training facility were a great number of trucks from KYEM, the state transportation agency, and the American Red Cross.

The eclipse in Hopkinsville, and across Kentucky, turned out to be an extremely positive experience. Public morale was widely reported to be high before, during and after the event.  I would assign roughly 50% of that much-desired outcome to the splendid weather we got—it was touch-and-go until about 2 days before the eclipse, and it did rain the day afterwards, but on Monday the 21st we had clear, blue skies, with a wisp of cirrus here and there, i.e. perfect viewing conditions.

I would assign the other 50% of the uniformly high morale to the advanced planning at all levels across Kentucky, from the civic planners to the emergency managers.  KYEM had eclipse-planning meetings spanning 13 months, culminating in a Tabletop Exercise (TTX) that drew over 250 participants from State, Local and Federal agencies for a face-to-face workshop.

Left—Working session during the July 2017 Tabletop Exercise (TTX) at the Kentucky Dam Village State Park, run by FEMA.  Right—A major component of emergency-management planning is identifying gaps in coverage, which are then addressed.  Shown is an example Gap Analysis outline from the Kentucky 2017 Solar Eclipse Playbook, which includes the detailed plans for all 21 affected counties and the state-wide and federal coordination. 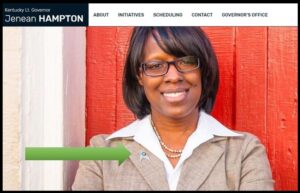 (Chris Graney added this figure and caption to Prof. Dowling’s post) Kentucky’s Lieutenant Governor, Jenean Hampton, was at the TTX and at the eclipse in Hopskinsville. This is a screen shot from her official Lt. Governor web page.  Is that a Star Trek pin she is wearing?  It just might be!

During the TTX, FEMA led everyone from 8 am through 3 pm through one emergency scenario after another.  When I say everyone, in addition to FEMA officials, in attendance were: the Kentucky Lt. Governor, Jenean Hampton (she skipped a meeting with the U.S. Vice President to be there), mayors from all the affected towns, convention-bureau officials, Director Dossett and officers from KYEM, emergency managers from the 21 affected counties, the Kentucky State Police, the KY National Guard, the KY Transportation and Health offices, the U.S. Departments of Homeland Security, Health and Human Services, and Transportation, the U.S. Coast Guard (for riverboat traffic), the U.S. Forestry Service, the NWS, the American Red Cross, representatives from ATT, Verizon and Sprint, and representatives from local universities, including myself.  It was the biggest TTX in Kentucky’s history.

Once all 21 counties in Kentucky affected by the eclipse had submitted their final plans, they were incorporated into the Kentucky 2017 Solar Eclipse Playbook (for official use only), which is 416 pages long. One outcome of the TTX is that every agency was on the same page in terms of communication tools; in fact redundant communications hardware was five layers deep, from web-based tools down to battery-operated satellite phones and ham radios.  Over 110,000 emergency bottles of water were staged near the path of totality—the public never saw these—and there were over 150 ambulances on standby, with additional clusters of 5 ambulances spread throughout the area.  The public did see the many air-conditioned tents set up to help people with the heat and humidity, the first-aid centers, the many food and drink vendors, the portable toilets and hand sanitation facilities, the 40 large traffic road signs put up on the main highways and parkways between Paducah and Hopkinsville to help guide eclipse traffic, and the traffic officers that directed traffic at rural intersections after the event.

The Kentucky Division of Emergency Management (KYEM) set up a Regional Response Coordination Center (RRCC) in Hopkinsville. Shown is the RRCC just before the 9am briefing on “game day”.  One of the lighter moments came when the chief 911 operator reported emergency calls were down from the previous year, but they were getting requests for help with WiFi. 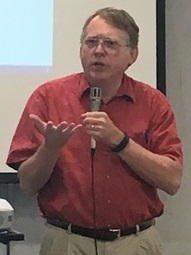 The author opened the 9 am briefing of the RRCC with a description of totality.

The only major problem that emerged was the after-event traffic, which of course was anticipated.  For example, it took me 9 hours to get home to Louisville from Hopkinsville, which is normally a 2.5-hour drive.  But, I can report first-hand that morale at rest stops along the way was remarkably high—everyone was talking about the corona and how bright and beautiful the eclipse was, many hours after the event. Patience reigned supreme; everyone seemed to have budgeted for the traffic.

This was my first totality, and it was a delight to be able to gaze across the inner ecliptic plane for the first time, and see all the planets in a row.  The corona was much brighter than I was expecting—I hear this is the impression many people took away—and totality lasted what seemed like 30 seconds, although my wristwatch does not back me up on this; certainly it was the fastest 2:40 I have ever experienced.  The corona is an almost biblical sight: an immense white flame that brings darkness and cooler temperatures—hard to find an analogy.   And, we only have to wait 6 years for the next nearby one! 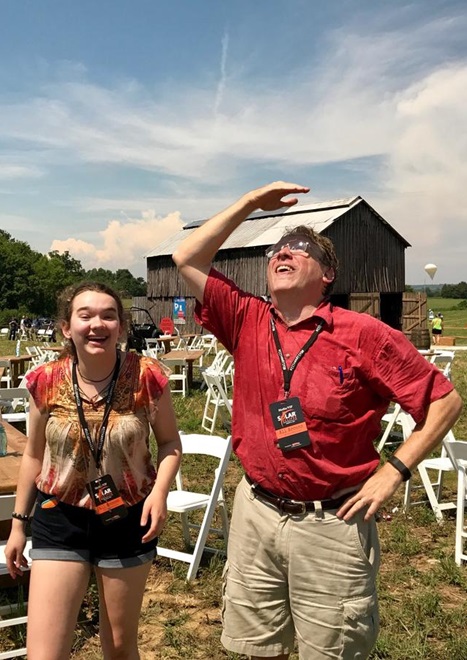 Seconds after totality ended, reporter Nicole Erwin of WKMS snapped this picture of the author watching Venus fade away, and daughter Nicole reacting to the corona.