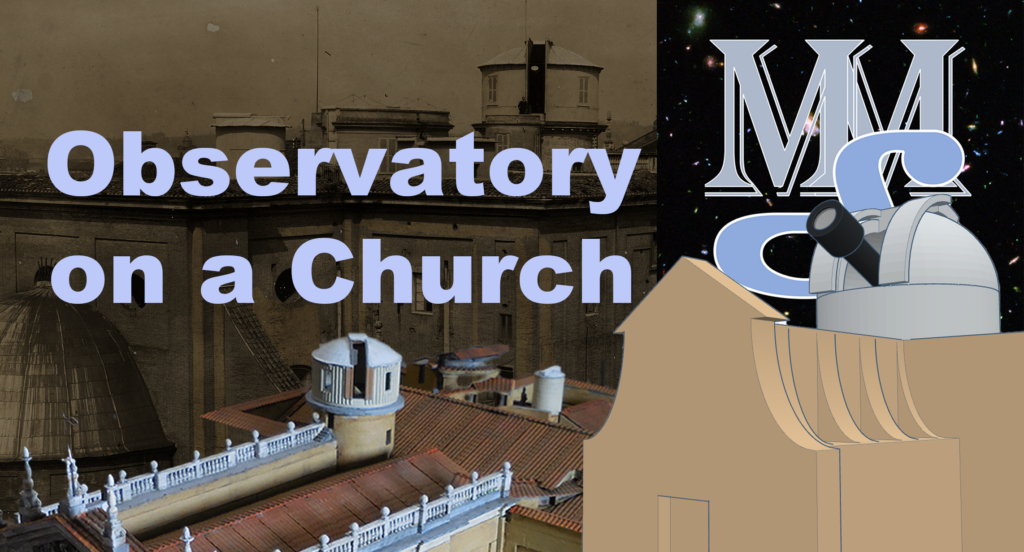 When Secchi became director of the Observatory of the Roman College in 1849, the facility was located atop the Calandrelli tower on one corner of the campus. This tower was tall and narrow, which meant it would move slightly in the wind. This was fine for early astronomy, but Secchi wanted to up the observatory’s game by several levels. He needed a solid platform that would remain stable during very sensitive observations.

The solution was the Church of St. Ignatius, on the opposite corner of the campus. In its original design, it was supposed to have been capped by a magnificent dome, much like many other churches. However, due to problems both political and economic, the dome was never built.

Yet, the “bones” of the church still included the massive columns that would have been needed to support it. Those columns were perfect to support a few telescopes and their surrounding structures, and so Secchi had the observatory transferred there.

Today, little remains of the splendor that was the Observatory of the Roman College. After Italian unification and the conquest of Rome, the new government confiscated the instruments and moved them elsewhere. The dome that housed the Merz refractor (the big main telescope of the observatory) has long since disappeared, as have several other features.

It is difficult to visualize what it would have been like when the observatory was active. That’s where I enter the story.

The Macke MakerSpace and Model Building

I had seen some drawings and even an old photo of the structure, but they all seem to be from just one perspective (Torre Calandrelli). I wanted to visualize the structure in three dimensions.

I happen to have a hobby of building models, dioramas, and other such things. Recently, this hobby has transformed into a YouTube channel: Macke MakerSpace. I figured that I could combine this interest with my interest in Secchi’s work, and so I started building a model of the Church of St. Ignatius as it was in the heyday of the Observatory. It is about 1:180 scale, or approximately 45 cm x 25 cm.

I commenced the project around the beginning of May, 2021, and finally finished near the end of last December. To make the model as accurate as I could, it took quite a bit of research and references. Fortunately, I had made a visit to the site in 2018 and took many photographs. (And in 2019, I visited the observatory of Monte Porzio in Frascati, where several of Secchi’s instruments ended up.) I also had a lot of help with some of the research. In particular, Aldo Altamore and Ileana Chinnici were quite helpful in tracking down some references.

Once finished, I could begin editing the video. In the end, the project is divided into five parts, about 20 minutes each (except part 5, which is 30 minutes). I invite you to follow the build process here:

Observatory on a Church Part 1 (Putting the walls up)

Observatory on a Church Part 3 (Facade and roof)

Observatory on a Church Part 4 (Painting)

Observatory on a Church Part 5 (Telescopes and finishing details)

So what has become of the model, now that it is finished? Br. Guy Consolmagno (the director of the Vatican Observatory and my boss) was so impressed with it that he put it on display in our visitors’ center, the old observatory building in the Pontifical Villas at Castel Gandolfo, Italy. If your travel plans include that part of the world, you can arrange to visit and see it yourself!