This article was written in Italian by Fr. Gabriele Gionti, SJ, of the Vatican Observatory. It originally appeared in the L’Osservatore Romano on July 29, 2015. 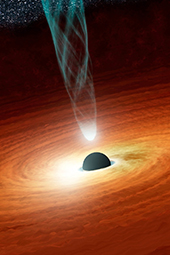 Artist’s conception of a black hole, from L’Osservatore Romano

The translation is by VOF Development Director Katie Steinke,and has been adapted for this blog post by Br. Guy.

When Einstein’s Theory of General Relativity began to be understood not simply as a theory with an intrinsic mathematical beauty but as something that could be applied successfully to describe compact objects such as neutron stars and black holes, relativistic astrophysics was born.

General Relativity describes the universe close to the beginning of time (t=0). But “time zero” itself is a “singularity”: many quantities that are basic elements of the theory no longer have a meaning that can be described by the theory. Close to that moment, in what is called the “Planck Time,” it has been proposed that gravity could be described through Quantum Mechanics into what has been called quantum gravity. Two theories moving in this direction are Super String Theory and Loop Quantum Gravity.

These and other questions were discussed by 1200 researchers from around the globe who participated in the 14th Marcel Grossman Meeting on relativistic astrophysics, held at La Sapienza University in Rome from July 12-18. The Vatican Observatory took an active part in the meeting, which was organized by the International Center for Relativistic Astrophysics (ICRA).

This year marks the 100th anniversary of the discovery of Einstein’s General Relativity equation and UNESCO’s declaration of the Year of Light. Thus the theme of the 14th Marcel Grossman Meeting celebrated both occurrences. Among the notable researchers present were the mathematician Yakov Sinai, an expert in chaos theory; cosmologist Stephen Hawking, who gave a public seminar remotely from Cambridge; the astrophysicist and Royal Astronomer Sir Martin Rees of Cambridge University; physics theorist and Nobel Prize recipient Gerard ‘t Hooft; and experimental physicist and Nobel Prize recipient Samuel Ting. Opening the meeting, Fr. José G. Funes, S.J., Director of the Vatican Observatory, read a message of greeting from Pope Francis.

The discussion also touched on critical questions like Dark Matter and Dark Energy. Dark Matter is an invisible material forming almost 27% of the total material in our universe that has been postulated in order to explain the orbital velocities of stars in galaxies, which otherwise would not obey Kepler’s orbital laws. The nature of this material is not yet known, and in fact the Large Hadron Collider at CERN in Geneva is being used to explore possible aspects of this dark matter. Dark Energy, which appears to represent about 68% of the universe’s material (matter and energy are equivalent concepts according to the relativity of Einstein) has been introduced to explain the observed acceleration of our expanding universe. Like Dark Matter, Dark Energy is an energy that cannot be detected directlly. It is believed that its nature is connected to a fundamental interaction of matter and energy called “zero point energy” that probably appeared immediately after the Big Bang.

Among the most interesting presentations were those dealing with the results from the European Space Agency’s Planck satellite, which measured the Cosmic Microwave Background Radiation (C. M. B.). This radiation is the first light of the universe; it confirms that the Big Bang model, while providing information on the distribution of material in the universe including Dark Matter and Dark Energy. Also discussed at the meeting were gamma ray bursts, which are energy emissions of gamma rays that, according to most recent theories, take place in the expanding disks around black holes; and cosmic rays, highly energized particles found in space.

The tradition of the Marcel Grossman Meeting began in 1975 under the initiative and direction of Professor Remo Ruffini of the Physics Department at La Sapienza University and president of ICRA. The meeting is named in memory of the mathematician Marcel Grossman, a friend of Albert Einstein who helped him understand the importance of the “Absolute Calculus” of Riemann and the results of Tullio Levi-Civita and Ricci Cubastro as a mathematical presupposition for the formulation of his Theory of General Relativity.

Fr. Gabriele Gionti, S.J., represented the Vatican Observatory on the meeting’s local organizing committee. During the week-long gathering Fr. Gionti, with Professor Salvatore Capozziello of the University of Naples, also coordinated one parallel session on the “Alternative Theories of General Relativity and Quantistic Cosmology” with seventy-four presenters.