Due to the short sight lines and the inability to define precise alignments… it may not be possible to determine whether the builders of the Serpent really intended it to be aligned to either the sun or the moon.

A montage of representations depicting both the Native Americans who built the places in Ohio such as Serpent Mound and the structures that they built. These images are details from larger works (see the Ancient Ohio Art series and the Appalachian Forest Museum) depicting activities at various Ohio locations.

Then last week’s post featured “astronomical alignments” in St. Louis Bertrand Church in my home town of Louisville, Kentucky, and how reliable the calculations and repeatable the results are regarding the position of the sun shining into that church (or into anything else). Not much is uncertain in that case. One nice thing about astronomy is just how reliable and repeatable it can be in so many cases—science at its cleanest and brightest: here are my calculations; here are my results; you do the same calculations; you make the same observations; you will see the same things; you will get the same results; we will be in complete agreement; there will be no dispute.

But not all science is so clean and shiny. Oftentimes things are much more muddled and uncertain and open to interpretation. Let’s consider the science behind the age of Serpent Mound. How might that age be determined?

Illustrations of Serpent Mound from an 1890 article by Frederic Ward Putnam in The Century magazine.

G. Squier and E. H. Davis first discussed Serpent Mound in their 1848 book entitled Ancient Monuments of the Mississippi Valley: Comprising the Results of Extensive Original Surveys and Explorations, published by the Smithsonian Institution. Consider their discussion of the “Fort Hill” Native American structure in Highland County, Ohio, which they surveyed in 1846, and of its age.

This work… is universally known as “Fort Hill,” though no better entitled to the name than many others of similar character. The defences occupy the summit of a hill, which is elevated ﬁve hundred feet above the bed of Brush creek at its base [the same creek that passes Serpent Mound some miles to the south]…. lts sides are steep and precipitous; and, except at one or two points, if not absolutely inaccessible, extremely difficult of ascent. The points most easy of access are at the southern and northern angles, and may be reached on horseback. The top of the hill is level, and has an area of not far from ﬁfty acres, which is covered with a heavy primitive forest of gigantic trees. One of these, a chestnut, standing on the embankment… measures twenty-one feet in circumference; another, an oak, which also stood on the wall… though now fallen and much decayed, still measures twenty-three feet in circumference. All around are scattered the trunks of immense trees, in every stage of decay; the entire forest presenting an appearance of the highest antiquity. 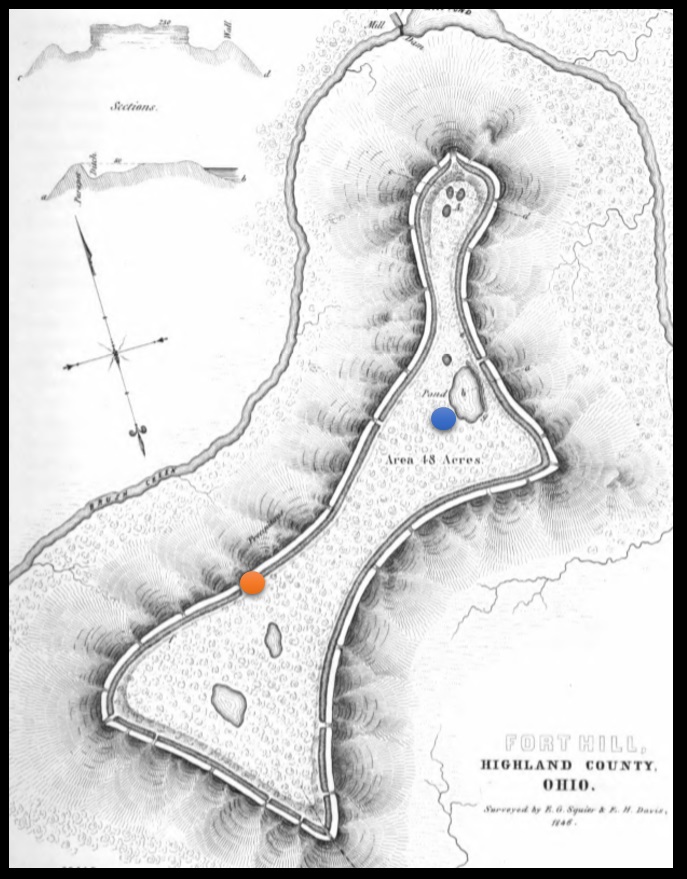 Thus much for its natural features. Running along the edge of the hill is an embankment of mingled earth and stone, interrupted at intervals by gateways. Interior to this is a ditch, from which the material composing the wall was taken. The length of the wall is eight thousand two hundred and twenty-four feet, or something over a mile and a half. In height, measuring from the bottom of the ditch, it varies from six to ten feet, though at some places it rises to the height of ﬁfteen feet…. [T]he degree of skill displayed and the amount of labor expended in constructing its artiﬁcial defences, challenge our admiration, and excite our surprise. With all the facilities and numerous mechanical appliances of the present day, the construction of a work of this magnitude would be no insigniﬁcant undertaking. And when we reﬂect how comparatively rude, at the best, must have been the means at the command of the people who raised this monument, we are prepared to estimate the value which they placed upon the objects sought in its erection, and also to form some conclusion respecting the number and character of the people themselves….

The evidence of antiquity afforded by the aspect of the forest, is worthy of more than a passing notice. Actual examination showed the existence of not far from two hundred annual rings or layers to the foot, in the large chestnut-tree already mentioned, now standing upon the entrenchments. This would give nearly six hundred years as the age of the tree. If to this we add the probable period intervening from the time of the building of the work to its abandonment, and the subsequent period up to its invasion by the forest, we are led irresistibly to the conclusion, that it has an antiquity of at least one thousand years. But when we notice, all around us, the crumbling trunks of trees half hidden in the accumulating soil, we are induced to ﬁx upon an antiquity still more remote. 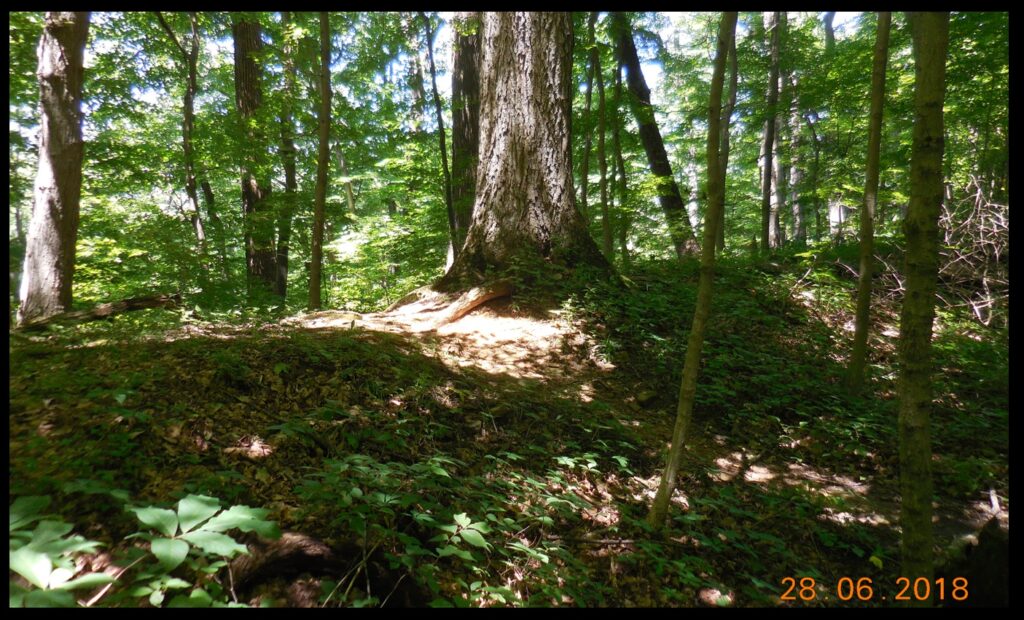 A large tree (but not 20+ feet in circumference) growing atop the wall at Fort Hill. This photo was taken at approximately the location indicated by the orange dot seen in the Squier and Davis figure above. 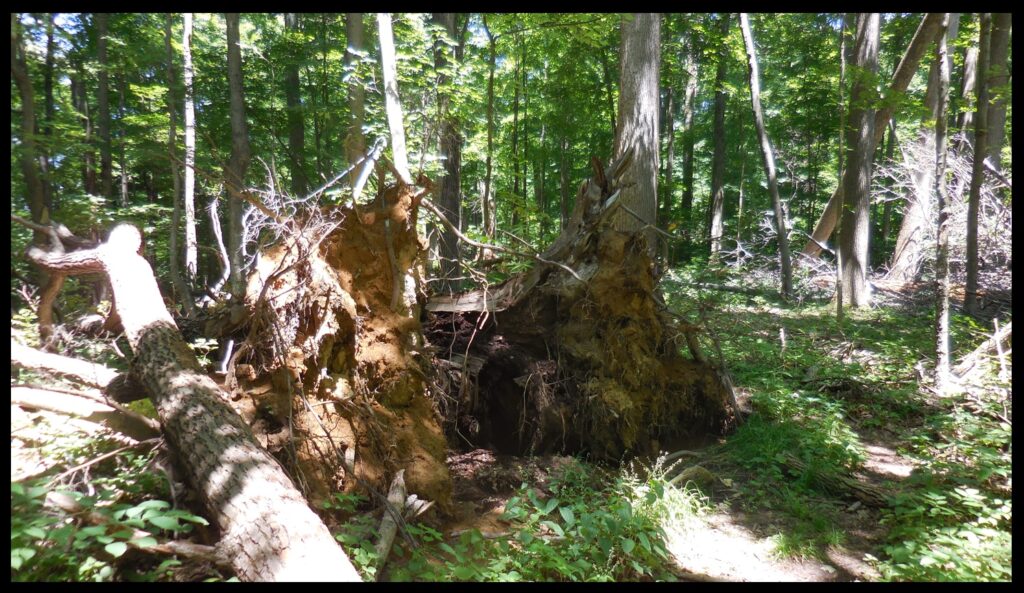 The forest at Fort Hill is still relatively undisturbed, and still boasts plenty of “crumbling trunks” of large old fallen trees. This photo was taken at approximately the location indicated by the blue dot seen in the Squier and Davis figure above.

This seems pretty reasonable, does it not? Squier and Davis presumably had a tool like a “hole saw” with which they could extract a bore sample from the chestnut tree. They counted the rings in and measured the length of the sample to determine 200 annual rings per foot within the tree’s trunk. The trunk measured 21 feet in circumference, so its radius was 21 ft/(2*pi) = 3.34 ft. That value times 200 yields 668 years—they are erring on the side of caution by giving 600 years as the upper limit on the tree’s age. The structure upon which the tree was growing must therefore have been well over 600 years old. Recall that they were doing this estimate in the 1840s, so today the Fort Hill structure would be well over 750 years in age by this estimate.

Squier and Davis note that, regarding “the antiquity of the ancient monuments… no attempt to ﬁx their date accurately can, from the circumstances of the case, be successful. The most that can be done is to arrive at approximate results.” They know that the calculations here will not have anything like the accuracy and precision of the calculations regarding the sun in St. Louis Bertrand Church that we discussed last week.

are covered with primitive forests, in no way distinguishable from those which surround them…. Some of the trees of these forests have a positive antiquity of from six to eight hundred years [as measured by tree rings]… But, as already observed, the forests covering these works correspond in all respects with the surrounding forests; the same varieties of trees are found, in the same proportions, and they have a like primitive aspect.

Squier and Davis then quote U.S. President William Henry Harrison (of Ohio, who died in 1841), who had explained the logic of this in a talk to the Historical Society of Ohio:

The process by which nature restores the forest to its original state, after being once cleared, is extremely slow. The rich lands of the West are, indeed, soon covered again, but the character of the growth is entirely different, and continues so for a long period. In several places upon the Ohio, and upon the farm which I occupy, clearings were made in the ﬁrst settlement of the country and subsequently abandoned and suffered to grow up. Some of these new forests are now sure of ﬁfty years’ growth, but they have made so little progress towards attaining the appearance of the immediately contiguous forest, as to induce any man of reﬂection to determine that at least ten times ﬁfty years must elapse before their complete assimilation can be effected. We ﬁnd in the ancient works all that variety of trees which give such unrivalled beauty to our forests, in natural proportions. The ﬁrst growth on the same kind of land, once cleared and then abandoned to nature, on the contrary, is nearly homogeneous, often stinted to one or two, at most three kinds of timber. If the ground has been cultivated, the yellow locust will thickly spring up; if not cultivated, the black and white walnut will be the prevailing growth…. Of what immense age then must be the works so often referred to, covered as they are by at least the second growth, after the primitive forest state was regained?

And so we see the logic of the argument put forth by Squier and Davis in the 1840s as to why the Native American monuments that they surveyed had to be many centuries old. This science is not so clean and bright as the sun-in-St.-Louis-Bertrand stuff discussed in last week’s post. Still, can we dispute their conclusions? It would seem that no one could disagree with their assessment of the age of Fort Hill.

But does that assessment work for Serpent Mound? Maybe not… but that will have to wait for next week’s post.