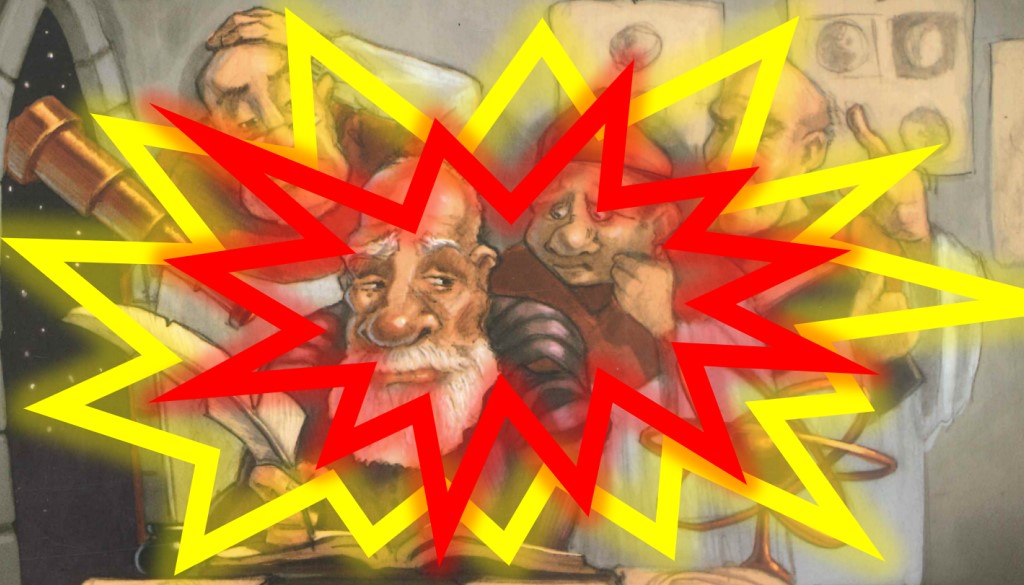 Sometimes it can be hard to find a good science book for a kid.  In my search for good books for younger readers for our Faith & Science Resource Center here at VaticanObservatory.org, I came across a book with a great title: Boy, Were We Wrong about the Solar System!  It is by Kathleen V. Kudlinski, published in 2008 by Dutton Children’s Books.

Br. Guy and I are currently working on a book about science being wrong, so this book caught my eye.  It looked like a book for kids that described the imperfect process that is science, that showed how we humans had gone wrong in our past ideas.  How cool!  And that is just what it did.

Unfortunately, it also contained this, about the telescopic discovery that Venus has phases:

And everyone could see for the first time that Venus changed shape just like our moon. That meant sunlight was shining on it from many different angles. Venus had to be circling the sun! If that was true, the other planets must be circling the sun, too. The Earth was not the center of the universe!

Church leaders thought these new findings went against the Bible. They had a famous scientist arrested when he wrote about the discoveries. He could never come to church again. But nothing they said could change the facts.

Well, so much for that book.

Moreover, no one thought the phases of Venus went against the Bible (the Bible does not say what Venus circles).  No one was arrested for writing about the phases of Venus.  Galileo was not excommunicated (which I guess is what is meant by “could never come to church again”).  And no one was out to change the facts.

In fact, who else observed the phases of Venus at about the same time as Galileo?  Church leaders!  Well, Jesuit astronomers, anyway.

Boy, was this book wrong!

This book will give kids the idea that Church leaders would just deny what is seen through a telescope.  That’s not good.  It is obviously not good from a “Church” perspective.  But it is also not good from a “science” perspective—promoting that all-too-popular notion of Conspiracy to Suppress the Truth, etc.

But who can blame Kathleen V. Kudlinski?  Back in August the New York Times published an article about some purported notes by Galileo on Jupiter’s moons that turn out to have been forged.  This article ran on the front page of the Times (and online).  Unfortunately, the article began with this:

Galileo Galilei was peering through a new telescope in 1610 when he noticed something strange: several bright objects flickering around the planet Jupiter that seemed to change positions nightly. His discovery, of moons orbiting Jupiter, was a major crack in the notion, widely held since antiquity, that everything in the universe revolved around the Earth.

The finding, which was condemned by the Catholic Church, helped prove the theory of a sun-centered solar system.

No, Galileo’s discovery of moons orbiting Jupiter was not condemned by the Catholic Church.  In fact, as soon as Jesuit astronomers (them again) in Rome could get their hands on a good telescope, they confirmed his discovery.  Indeed, since confirmation by other scientists of new discoveries—especially scientists with solid reputations (like Fr. Christopher Clavius at Rome)—is an important part of any scientific breakthrough, arguably this finding received key confirmation by the Catholic Church.

That Church scientists confirmed Galileo’s discoveries, and that their confirmation helped convince others that Galileo was right, is not new knowledge.  The following is from Stillman Drake’s 1978 (note—more than four decades ago!) book Galileo at Work: His Scientific Biography (University of Chicago Press):

Among the first persons he [Galileo] visited [when he came to Rome in April 1611] was Christopher Clavius, still professor at the Roman College of the Jesuits though now very old.  Cardinal Bellarmine, always cautious, requested from the four mathematicians there (Clavius, Odo Maelcote, Christopher Grienberger, and G. P. Lembo) a formal report on Galileo’s claimed celestial discoveries.  All four signed a statement confirming Galileo’s findings….

During Galileo’s stay at Rome the Jesuits of the Collegio Romano paid him the unusual honor of a meeting at which Father Maelcote delivered an oration praising the Starry Messenger [Galileo’s 1610 book announcing the discovery of the Jovian moons]….

[Mark] Welser wrote to a friend that he had long resisted Galileo’s announcements, in agreement with the chief mathematicians of his acquaintance, but that all were now converted, in particular Father Clavius, who had so assured Welser of their truth that he no longer had any doubts.

But that is not all.  In 1620 Cardinal Maffeo Barberini wrote a Latin poem that included praises to Galileo, specifically regarding his discovery of Jupiter’s moons. Translated from Latin, Barberini’s Galileo verses read something like this:

When the moon shines forth in heaven,
and sprinkles the glittering fires in a serene arc,
in a golden procession, then marvelous delight draws,
and holds fast, the eyes of people.

This person here admires the Evening Star shining forth,
the fearsome star of Mars,
and the sheen of the Milky Way.
That person there admires your light, O Polaris;

Still another marvels at the heart of the Scorpion,
or at the blazing Dog Star,
or at the attendants of Jupiter, or of Saturn (his father),
that were discovered by your glass, learned Galileo!

Not long after writing this poem, Barberini was elected Pope Urban VIII.

So, not only did “The Catholic Church” not condemn Galileo’s discovery of the Jovian moons, but Pope Urban VIII himself saluted that discovery in poetry.  (Yes, ten years later Urban would turn against Galileo, but that is obviously another story.)

And, who really thinks that someone is going to condemn seeing something?  Imagine:

No!  They are not there!  You don’t see that!  You are condemned!

This is bogus.  Thinking that this would seriously happen attacks the very idea of reproducibility in science. Reproducibility is where I say “I did this, and here is what I saw” and people who are skeptical of my claim can go through the steps I went through, and see for themselves.  Reproducibility is really important in science.  To suppose that people—a substantial group of serious people, not the occasional flake—would condemn what can be seen by all is to render reproducibility meaningless.

I think we all implicitly understand the bogusness here.

I taught astronomy to community college students in Kentucky for many years.  Those students had often been deprived of any kind of good education.  Some had no education beyond grade school.  Some had no knowledge of science at all.  I met students who were unaware that stars were more distant than the moon, or had never heard of protons, neutrons, and electrons.

At the same time, they often fully accepted all the “hiding the Truth” baloney of today’s society.  Bigfoot? Real.  The Apollo moon landings?  Faked.  The government was hiding a lot.

Why, they asked (sometimes with words, sometimes with attitudes), should we believe scientists like you, Professor Graney, who might be in cahoots with the Bigfoot-hiders and Apollo-fakers?

The answer was to ask them to look to the rising of the sun.  It was best if the class could step outside and look around—a break in the expected routine of schooling that grabbed everyone’s attention.  Prof. Graney, the scientist, points and says the sun will rise over there, in that direction we call “east”.  Next, the Professor says, let us imagine that someone else, maybe a very famous and influential person, says that no, the sun will rise there, in the direction we call “north”.  What is more, that person is so influential that he has pitched his idea to the entire country at great expense.  The idea is all over the internet.  Repeated polling has now shown that indeed 82% of the country agrees that the sun rises in the north.

The students always implicitly understood that the sunrise question will be settled by gathering before dawn and watching the sun rise.  They knew that when the sun came up, it didn’t matter how many people believed that the sun rose in the north, or how famous and powerful the advocates for a northern sunrise might be.  They understood reproducibility.

No one is going to condemn the observation that the sun rises in the east.

No one is going to condemn something everyone can see in a telescope.

I wrote to both the author of the Times article and to the Times itself, trying to persuade them to correct the false information printed on the front page of the New York Times.  I had some polite exchanges of e-mail.  They heard me.  But, no correction.

If I were still teaching, what would I say to my Bigfoot-true-believing students?  What do I say to readers of Sacred Space Astronomy?  Sometimes there is some bad information out there, both in books for kids, and in newspapers.

And sometimes no one cares to get it right.

Boy, is that wrong.

15  |  From the Backyard: Silent Night, Holy Night… Praying For Another Christmas Miracle.