How old is Serpent Mound, a Native American monument notable in part for its astronomical alignments? Last week we saw how E. G. Squier and E. H. Davis argued that the Native American works that they surveyed in the 1840’s had to be many centuries old, by reason of the trees growing on those works. However, you may recall from my post of three weeks ago that the Ohio History Connection (formerly the Ohio Historical Society), who operates the Serpent Mounds site, states that—

Thousands of years ago, Native Ohioans populated the landscape with mounds and massive earthworks. In the late 19th century, Harvard University archaeologist Frederic Ward Putnam excavated Serpent Mound, but he found no artifacts in the Serpent that might allow archaeologists to assign it to a particular culture. Based largely on the nearby presence of Adena burial mounds, later archaeologists attributed the effigy to the Adena culture that flourished from 800 B.C. to A.D. 100. This theory on the site’s origin was accepted until a 1991 site excavation used radiocarbon dating to determine that the mound was approximately 900 years old. This would suggest that the builders of the Serpent belonged to the Fort Ancient culture (A.D. 1000–1500). In 2014, another team of archaeologists presented new radiocarbon dates for the Serpent suggesting that it was built by the Adena culture at around 300 B.C. More work is needed to clarify the age of Serpent Mound.

Frederic Ward Putnam wrote about Serpent Mound in an article entitled “The Serpent Mound of Ohio”, published in the April 1890 issue of The Century Illustrated Monthly Magazine. Putnam described how, in September 1883, he and four other archaeologists visited the Serpent. He described the area as being covered with brush when he visited, but not so much brush that he could not see what was there. In fact, he wrote that on the evening that he arrived at the Serpent, he made arrangements with a Mr. Lovett, the owner of the land, to have the place cleared of underbrush so that they could see the entire Serpent, and that by noon the next day it had been roughly cleared, and—

…the view thus obtained of the serpent and the egg—as the oval work in front of its jaws has been called—led to a still stronger desire to know more, and a resolve to do all in my power to preserve this singular structure, which seemed so strangely transplanted from the mythology of the East. 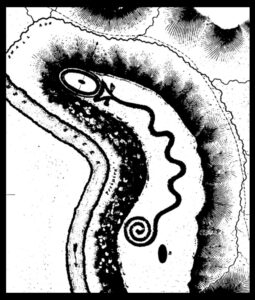 Squier and Davis’s illustration of Serpent Mound, from their book Ancient Monuments of the Mississippi Valley: Comprising the Results of Extensive Original Surveys and Explorations. Squier and Davis wrote regarding the Serpent that “No plan or description has hitherto been published; nor does the fact of its existence appear to have been known beyond the secluded vicinity in which it occurs.”

So, there were no trees on the Serpent in 1883. However, Putnam writes that—

When Squier and Davis, after their survey in 1846, gave to the world the first account of this earthwork, it was covered with a thick forest, from which many a noble tree has been cut, as indicated by stumps still standing at the time of our visit. Thirteen or fourteen years after their visit a tornado swept its path directly along the serpent hill, and with the exception of a few saplings the forest was laid low. This led to clearing the land, and to the cultivation for a few years of the portion occupied by the serpent. Nature soon covered the scars with a protecting sod, which was followed by a growth of sumach, redbud, and briers.

But in fact Squier and Davis (who we met last week) did not report that the Serpent was covered with a thick forest. They made no mention of forest in their description of the place, and noted no forest in their illustration of it. They did mention forest at other Native American structures. Some examples:

All around are scattered the trunks of immense trees, in every stage of decay; the entire forest presenting an appearance of the highest antiquity [“‘Fort Hill,’ Highland County, Ohio”]….

Most of the wall, and a large portion of the area, are still covered with a heavy primitive forest. Trees of the largest size grow on the line, twisting their roots among the stones, some of which are ﬁrmly imbedded in their trunks [“Stone work, near Bourneville, Ross County, Ohio”]….

It is covered with a primitive forest of oak, hickory, and locust, of the same character with the surrounding forests [“Fortified hill, Butler County, Ohio”]….

I am going to speculate now: I am skeptical that Serpent Mound was ever heavily forested. The mound structure is long but the mound itself is not that large—just a few feet high—and it is not made of rock, but rather mostly clay. If a large forest grew up on Serpent Mound—a forest of the sort that grew on ‘Fort Hill’ (see Part I of this post from last week)—then surely the falling of trees would have ripped up the mound, and it would not have been so intact as it was in 1846, or in 1883, or as it is today. And had a tornado passed through, tearing up an ancient forest in the manner Putnam claimed, surely that would have damaged the mound greatly, on account of the great falling trees pulling up vast chunks of the ground, all at the same time.

Fallen trees in the forest on the ‘Fort Hill’ construction in Ohio, and the earth they pulled up in falling.

My speculation is that Serpent Mound was built or actively maintained by Native Americans who lived in that area much later than Squier and Davis or Putnam thought. Nineteenth century Americans (not of Native ancestry) tended to consider the people who they had displaced as not being builders of big structures. Putnam himself refers to

…the scattered bands of the last century [who] made their habitation on the spot, probably without any legendary knowledge or thought of the earlier worshipers at the shrine, over grown and half hidden by a forest which seventy years ago was of the same character as that on all the hills about.

In Putnam’s view, the more recent Native Americans were just a people who dwelt among the ruins of works built by others, not a people who built great works themselves. I speculate that he was not inclined to consider that more recent people built Serpent Mound, or at least maintained it up until some point in the more recent past—recent enough that no impressive forest of ancient, large trees greeted Squier and Davis in 1846. There may have been trees there in 1846—Putnam noted stumps, after all—but they were a relatively recent second growth.