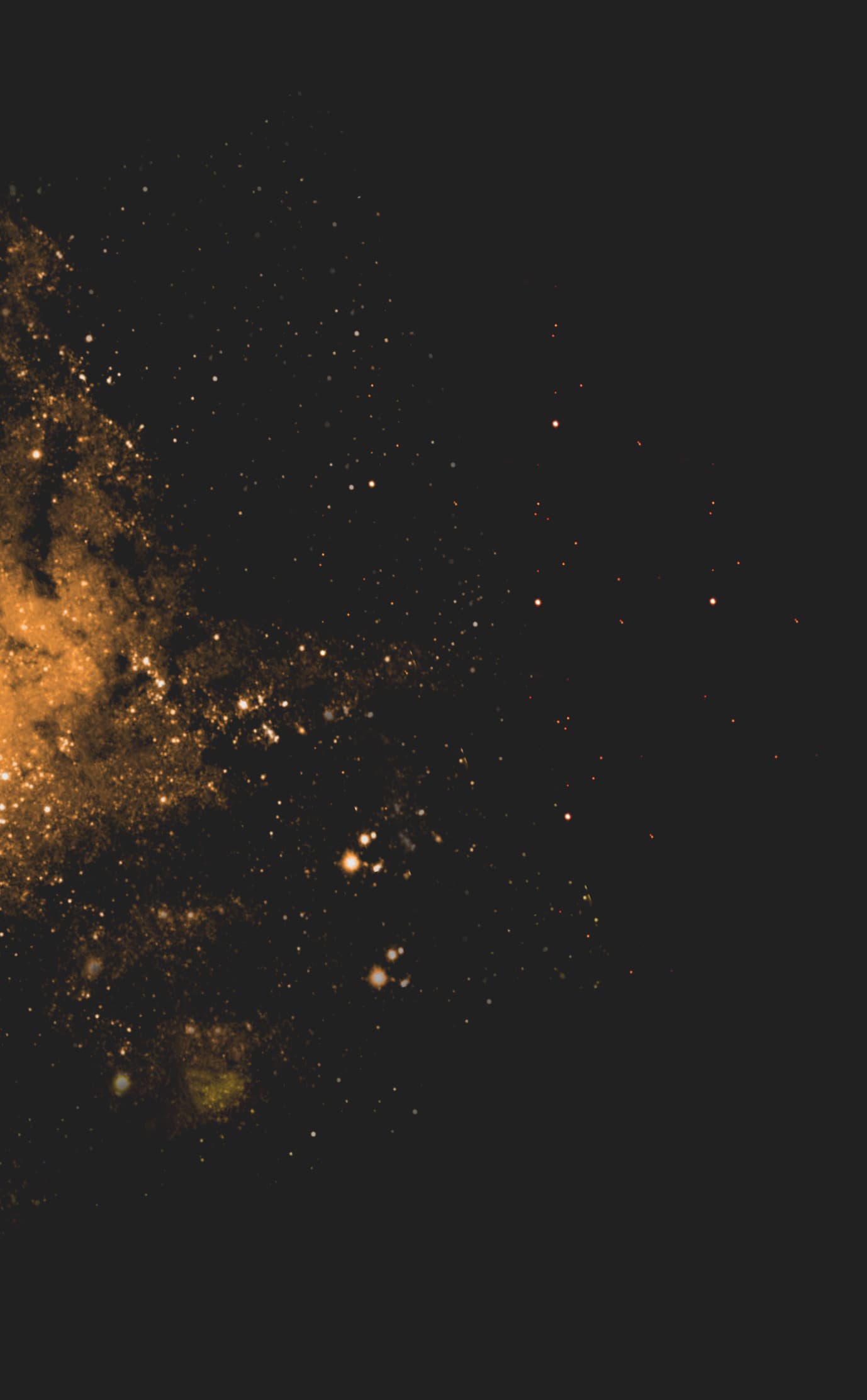 The Vatican Advanced Technology Telescope (VATT) has produced a number of important scientific results over its 25 year history.

Some of its most important programs may well be those going on right now, its true significance will only be revealed in hindsight! But even limiting our look to research projects that are now essentially completed, there have already been a number of significant findings coming from the VATT.

How do you judge what is significant?

You can track this at a NASA/SAO website called the Astrophysics Data System which records every scientific paper published in major journals in the field of astrophysics, and how often they have been cited.

Here are some of the areas of research where, according to this NASA site, the VATT has made a big impact:

A mysterious source of gravitational attraction, dubbed “Dark Matter,” was first hinted at in the 1930s in studies of the motions of distant galaxies.

By the 1980s, Dark Matter’s existence was not only well established, but a number of arguments showed that it was a completely unexpected type of material, different from ordinary atoms.

The great thing about these proposals was that they could be tested. And in one of its very first programs, the VATT was instrumental in testing, and eliminating, the MACHO hypothesis.

If there were indeed many “MACHOs”, massive but compact objects orbiting in the halos around a galaxy, would we be able to see them? Not directly; by definition, they would be dark and compact. But their gravity should cause a number of “microlensing” events, momentarily focusing the light of any star lined up exactly opposite to them from us.

Two astronomers from Columbia University, Austin Tomaney and Arlin Crotts, assisted by Specola astronomers Fr. Chris Corbally and Fr. Richard Boyle, surveyed the nearby Andromeda Galaxy to look for these flashes of light.

Their results, published in the Astronomical Journal in 1996, showed conclusively that while such microlensing events were indeed observed, they were far too few to account for the Dark Matter known to exist in the Andromeda Galaxy.

This work has been cited more than 160 times since its publication.

The top images show the raw data at two different times; the bottom images subtract the average of that region from each image above. The bright spot on the right is a momentary gravitational lens event. 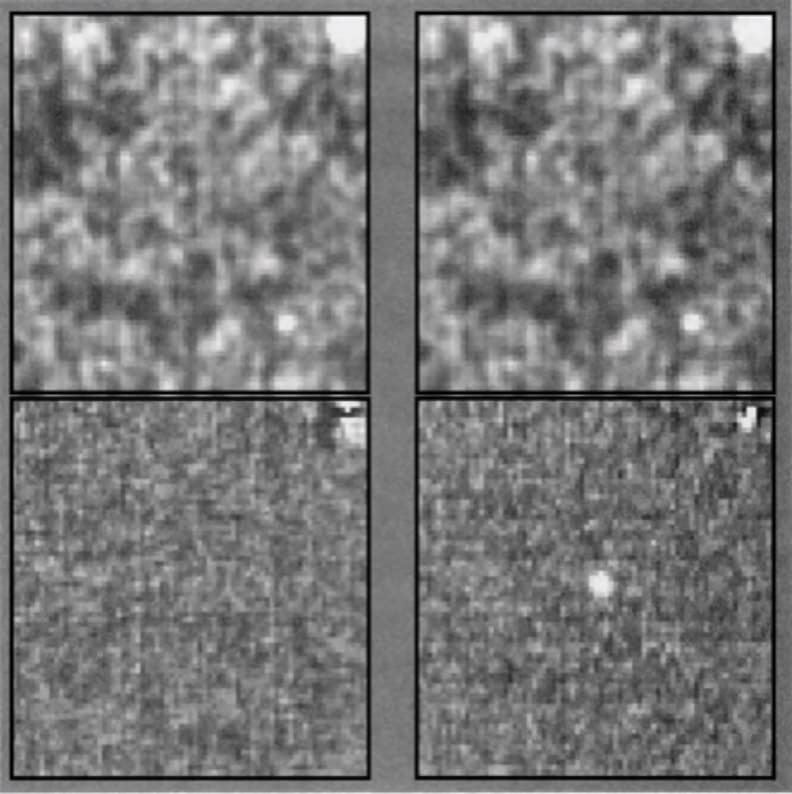 In the mid 1990s, the world of astronomy was astounded by the “Hubble Deep Field” image, made when the Hubble Space Telescope was directed to image a seemingly “empty” piece of space.

By exposing its camera for many days, a remarkable number of faint, very distant, and thus very old, galaxies came to light.

Yet, ironically, a full analysis of this image required another bit of science that no one had done yet: a similar set of images, at a similar resolution, of galaxies much closer to us in space and time.

Only then could one see just what was the same, and what had changed, in galaxy morphology over the age of the universe.

In order to create this comparison set of images, the VATT was employed in several surveys of the colors and morphologies of local galaxies. 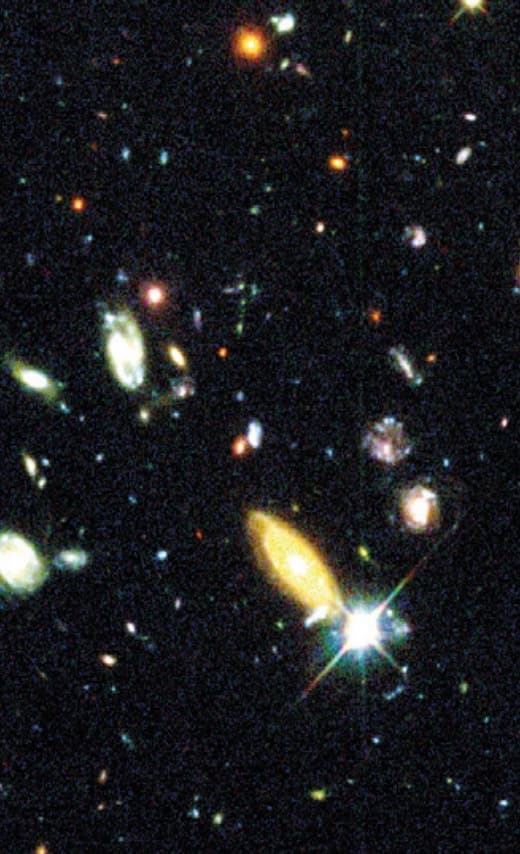 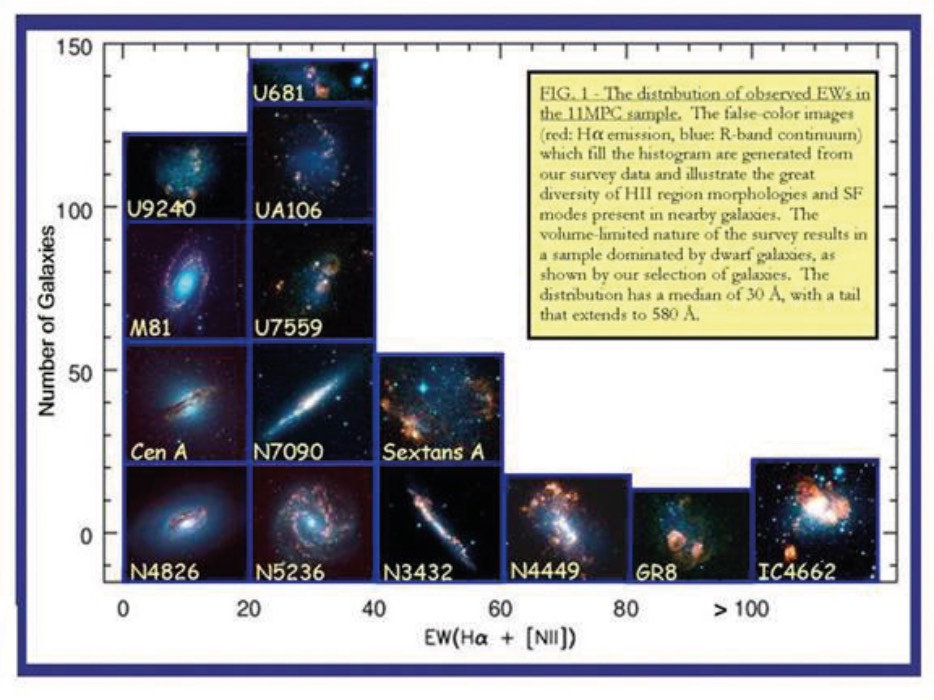 The 11HUGS survey of galaxies imaged galaxies of all types located within11 megaparsecs of Earth to compare their characteristics to far distant galaxies like these, to the left, from the Hubble Space Telescope Deep Field.

The 11HUGS survey of galaxies imaged galaxies of all types located within11 megaparsecs of Earth to compare their characteristics to far distant galaxies like these, to the left, from the Hubble Space Telescope Deep Field.

Kuiper-belt objects (KBOs) are an ancient reservoir of comets beyond Neptune’s orbit.

First discovered in the mid 1990s, the most basic question about these faint and distant objects was to characterize what was there: were they all the same, or did they come in different populations?

Because they are so small and distant, the only data we have are their orbits and their average colors.

Beginning in the late 1990s, Steve Tegler at Northern Arizona University and Bill Romanishin from the University of Oklahoma collaborated with Br. Guy Consolmagno on a 15 year program of observations to measure KBO colors using the VATT.

These objects are faint (a million times fainter than the faintest star visible to the naked eye) and appear to move in the sky quickly enough that you cannot image them for more than five minutes before their images start to blur.

The VATT and its CCD camera were the ideal system; with its sharp seeing it could concentrate the faint light onto a few pixels, while its field of view was sufficient to ensure that suitable comparison stars would be imaged alongside the object.

The result of a key 2000 paper published in Nature (with more than 130 citations) is that these objects come in two distinct color groups.

Some of these objects were found to have the reddest optical colors in the solar system, while the others are gray: their surfaces reflect sunlight without absorbing any particular color.

Follow up work at the VATT showed how these colors were connected to the nature of their orbits. All of the objects that have near-circular orbits larger than Pluto’s orbit have extremely red surfaces; but of those objects whose orbits have been perturbed in inclination or eccentricity, about half are gray.

The centaur 5145 Pholus orbits from Saturn out to beyond Neptune; it was one of hundreds of trans-Neptunian objects surveyed in three colors.This is a composite of images taken with red, green, and blue filters: notice the colored dots marking its passage in front of a distant galaxy.

Pholus is the tiny dot indicated in the lower half of the image; the galaxy NGC 5964 just happened to be in the field of view at the same time! 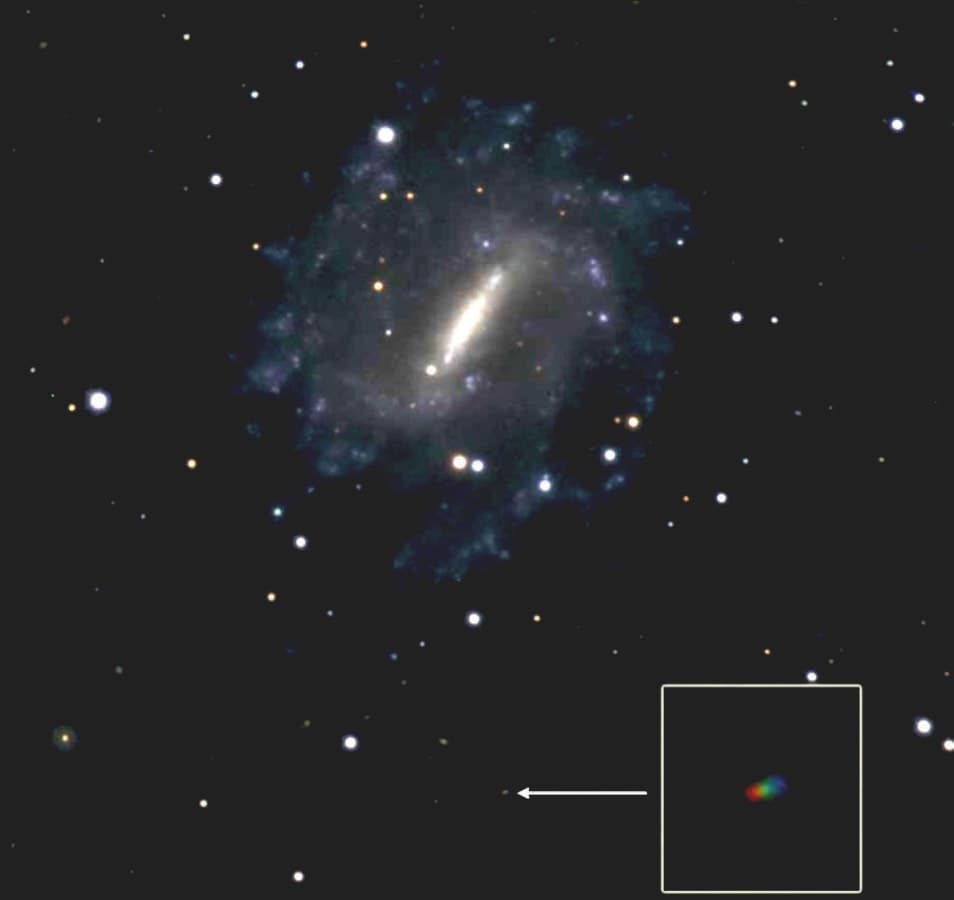 Fr. Richard Boyle and his colleagues have been using the VATT for more than twenty years in their survey of open star clusters.

This work is ongoing, and its ultimate significance is still developing. But in the meanwhile, with all that time at the telescope, they have had the opportunity to go “fishing” for discoveries closer to home.

Since 2009 Fr. Richard Boyle and collaborators K. Cernis and V. Laugalys at the Vilnius Observatory in Lithuania have been doing astrometry on asteroids and trans-Neptunian objects.

As a result of their observations, over a hundred new asteroids and KBOs have been discovered at the VATT.

One in particular is large enough to be nearly dwarf-planet sized. Following IAU conventions that such objects are named for deities related to creation, they have named it “Praamzius” for the goddess of creation in Lithuanian mythology.

Meanwhile, in 2001-2003, Bill and Elizabeth Ryan from New Mexico Tech and their collaborator C. T. Martinez from the University of New Mexico used the VATT to observe asteroid 3782 Celle, which has been associated both dynamically and spectroscopically with the Vesta asteroid family — the likely source of the basaltic achondrite meteorite family.

During the 2002-2003 run, dips in the brightness of this asteroid gave clear evidence that Celle is actually a binary system with an average bulk density of 2.2 grams per cubic centimeter, much less than the density of the basaltic meteorite fragments.

This indicates that at least one, if not both, of the binary components has a highly fractured internal structure. This finding has important implications for understanding how fragments may have been broken off from their original parent body and re-accumulated into a binary system.

Among the solar system objects discovered and tracked at the VATT was a pair of asteroids in orbit about each other whose colors and orbits conned them with the important asteroid 4 Vesta, shown here in a NASA image from the Dawn Spacecraft. 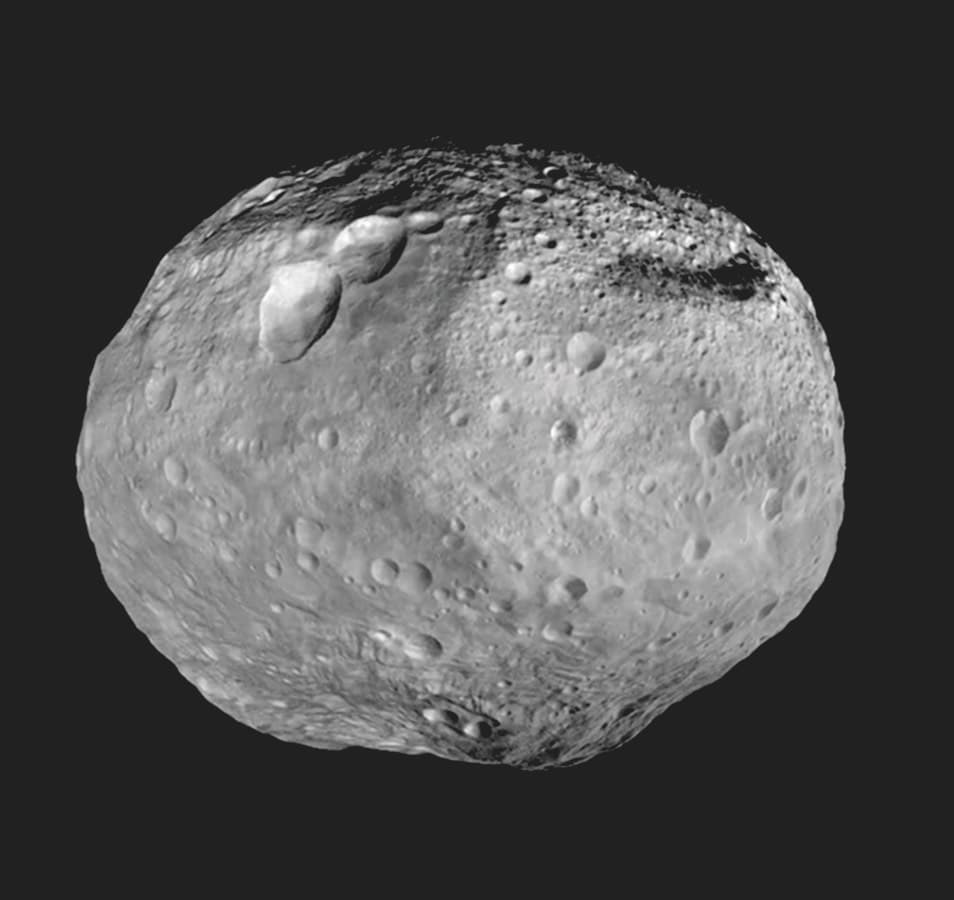 There are many other widely cited papers based on observations made at the VATT. Among the most cited works (citation counts as of January 2021):