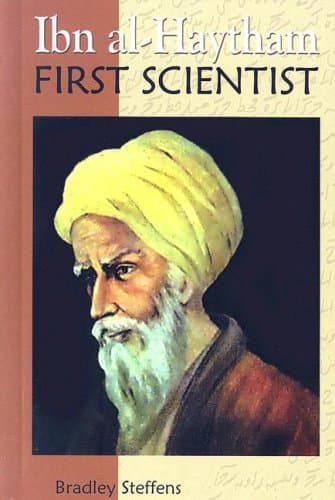 This book by Bradley Steffens concerns Abu ‘Ali al-Hasan ibn al-Hasan ibn al-Haytham, who lived around the year 1000 in Basra in what is now Iraq, as well as in Egypt. Ibn al-Haytham did work in a number of areas of science and mathematics, especially in the field of Optics. His optics work became well-known and well-regarded in Europe (where he was known as “Alhazen” or “Alhacen”). Ibn al-Haytham argued that, “for gaining access to the effulgence and closeness to God, there is no better way than that of searching for truth and knowledge”. Like many Christian thinkers, he developed a strong appreciation for the work and insights of Aristotle. From the publisher:

Ibn al-Haytham, also known in the West as Alhazen, who lived from approximately 950 to 1040, was a pioneer in several scientific and mathematical fields, including physics, optics, astronomy, and analytical geometry. His experiments on how light is refracted by the atmosphere were later developed by Isaac Newton, and he discovered the first law of motion centuries before Galileo. Most importantly, Ibn al-Haytham, a devout Muslim, was committed to a scientific method based on observation, hypothesis and testing, and he helped keep alive the classical spirit of inquiry first developed in ancient Greece. Ibn al-Haytham’s groundbreaking work reflects a life of travel and adventure, and this biography introduces this fascinating scientist to a new generation of readers.

NASA’s Pi in the Sky Challenge

The Virtuous Astronomer, Part I