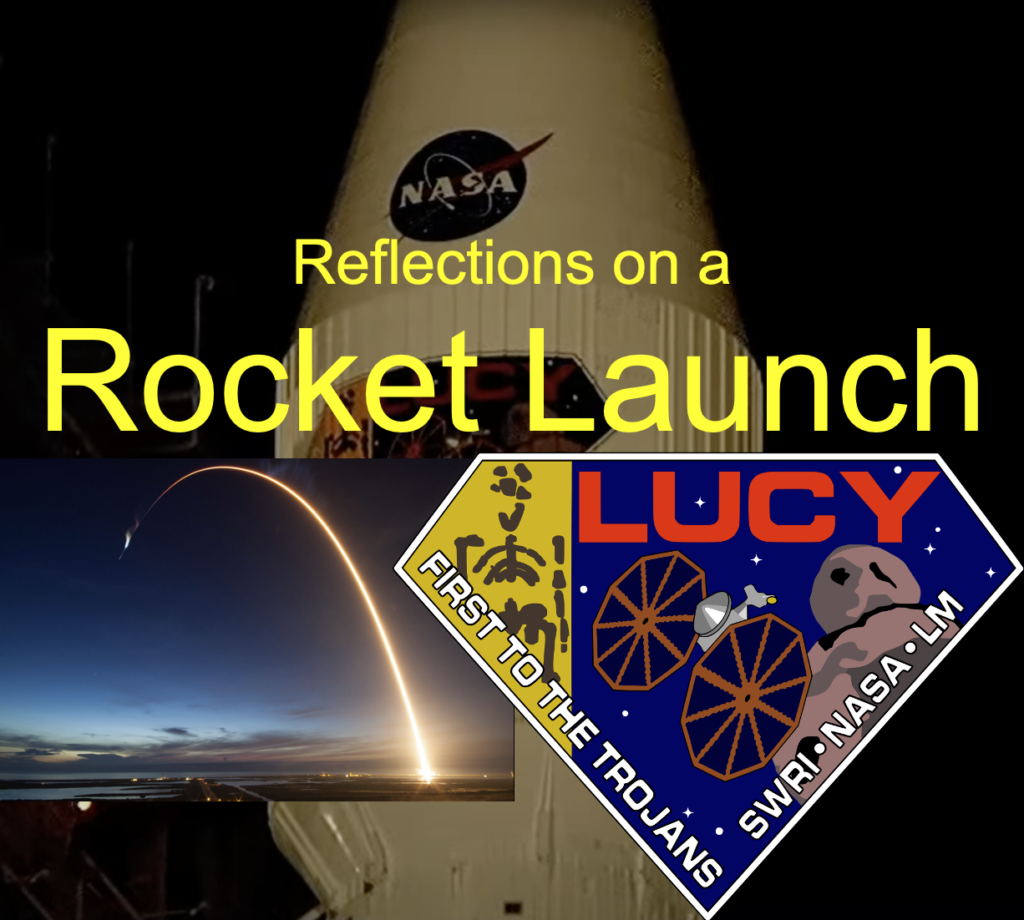 This morning at 5:34 am Eastern time (October 16), an Atlas V rocket took off from Cape Canaveral Space Force Station in Florida. The rocket’s payload was a probe known as Lucy.

Unlike so many other space probes, the name of this one is not an acronym. It was inspired by the skeleton of Astralopithecus afarensis discovered by Donald Johanson and his team in 1971. This early hominid from 3 million years ago was an important link in the chain of human evolution from our early apelike ancestors.

The name of the Lucy hominid was in turn inspired by the Beatles song Lucy in the Sky with Diamonds. (It was what they had been listening to on the radio when they discovered the skeleton.) The connection between the song and this mission is not lost; the probe is another Lucy in the sky with diamonds. There is a prism made of diamond in one of the instruments. Hence, the mission patch is in the shape of a diamond. It also contains a silhouette of the Astralopithecus skeleton.

The mission itself is directed at the Trojan asteroids. These are asteroids trapped in the L4 and L5 Lagrange points in the Jupiter-Sun system. They are points of stability located 60 degrees ahead and behind Jupiter in its orbit. An object near these points can remain in a stable orbit for billions of years.

That’s what makes this special. It is thought that in the early development of the solar system Jupiter ejected a vast amount of material from beyond the main asteroid belt out of the solar system. However, it would not have touched asteroids near those stable zones. Thus, we expect that the Trojan swarms preserve asteroids of a type different from the main belt, ones that formed much further out from the Sun than the main belt asteroids. They are a “missing link” in the early history of our solar system.

The mission will visit seven Trojan asteroids over 12 years. On the way out, its path also takes it past a main-belt asteroid. This asteroid has been named 52246 Donaldjohanson in honor of the discoverer of the Lucy skeleton.

I am happy to have been invited to participate in the mission as a named collaborator. As my former thesis advisor, Prof. Dan Britt (Univ. Central Florida), approaches retirement, I will assume much of his role with the Interior and Bulk Properties Working Group of the mission science team. This team is responsible for determining density, macroporosity, and several other properties of the asteroids as the spacecraft flies by.

Unfortunately, I was unable to attend the launch. I am in Italy and won’t make it back to the US for a while. I couldn’t even make it to watch the launch online live; I had a lunch appointment in Rome at that exact time. Nevertheless, I followed regular updates from the science team and cheered for its success. I cannot wait to see the results of this spectacular mission.

Thinking about the launch drew to mind memories of another launch I was fortunate enough to attend. Back in 2009, a space shuttle launched near midnight. I happened to be in Titusville, Florida, within sight of the launch pad. A friend had reserved a nice spot on a pier from which we could view the event from a safe distance of about 5 miles.

A night launch is spectacular, especially when the vehicle is as big as a space shuttle. The fire bellowing from the rocket engines lights up the entire sky bright as day. When I pulled my gaze away from the rocket itself, I saw that everything around me cast a shadow— a rocket shadow!

If you watch it in person from the ground, you see the rocket go up and up, and then stop, and then it starts to go down. It will keep going down until it falls below the horizon.

A moment’s thought makes the reason for this peculiar phenomenon obvious. The rocket is obviously not falling down to the ground; in fact its altitude will continue to climb until it reaches orbit. But from the moment of launch, the craft begins to move toward that orbit. That means it doesn’t just go up; it has to move horizontally as well.

The craft veers east and starts gaining speed in that direction until it reaches almost 17,000 miles per hour, which will be sufficient to hold it in low-earth orbit. At those speeds, the craft will quickly follow the curvature of the earth and pass below the horizon. This “up and then down” trajectory is simply how this path looks from a fixed point on the earth.

Even though Lucy is intending to launch its payload out of orbit and into interplanetary space, its initial launch still looked like this. This is because the rocket went into orbit before it fired its later stages to send the probe on its way out toward the Trojans.

In these days of flat-earth conspiracies, I can think of no better naked-eye evidence of the roundness of the Earth (short of going to space yourself) than to watch a rocket launch into orbit. The trajectory you see only works if the craft is encircling a round world.

You can follow the Lucy mission on the Southwest Research Institute webpage: http://lucy.swri.edu