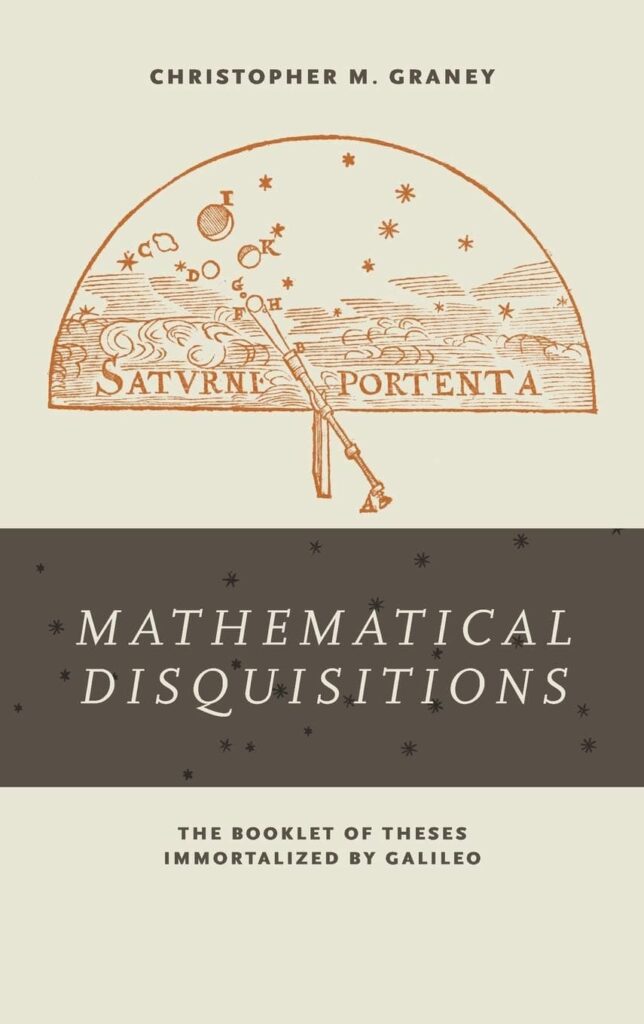 This 2017 book by Christopher M. Graney is the first complete English translation of an astronomical text written by scientists who stood opposite Galileo in the debate on the question of Earth’s motion. Galileo painted a very unfavorable portrait of Mathematical Disquisitions and its Jesuit authors, but the book itself turns out to be a competent scientific work and not much like Galileo’s portrayal of it.

From the publisher, the University of Notre Dame Press:

Mathematical Disquisitions: The Booklet of Theses Immortalized by Galileo offers a new English translation of the 1614 Disquisitiones Mathematicae, which Johann Georg Locher wrote under the guidance of the German Jesuit astronomer Christoph Scheiner. The booklet, an anti-Copernican astronomical work, is of interest in large part because Galileo Galilei, who came into conflict with Scheiner over the discovery of sunspots, devoted numerous pages within his famous 1632 Dialogue Concerning the Two Chief World Systems—Ptolemaic and Copernican to ridiculing Disquisitiones. The brief text (the original was approximately one hundred pages) is heavily illustrated with dozens of original figures, making it an accessible example of “geocentric astronomy in the wake of the telescope.”

The treatise provides valuable insight into the astronomical debates of the seventeenth century, a time when the question of the Earth’s motion was still very much in flux. Whereas Galileo’s works are readily available, there are far fewer translations of works arguing the other side. Christopher Graney’s translation focuses on the mathematical and astronomical core of Locher’s work and is suitable for undergraduate students in courses on the history of science, philosophy of science, astronomy, and physics.