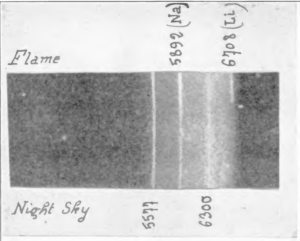 When I ran across the paper that gave the title to this post, it seemed as if it would make a wonderful title to a poem, perhaps one by Marilyn Nelson or Billy Collins, about what is hidden in plain sight – the airglow, and some of the early women in science.

The moon and stars are not the only lights in the night sky, the very envelope of air that surrounds us glows, day or night.  One of the sources of the earth’s airglow is a 3 mile deep layer of sodium atoms about 50 miles above the earth’s surface.

There are roughly 8000 sodium atoms in a milliliter of air up there. In fact, there’s not much air at all, the pressure is about a millionth of what it is as sea level.  Even so, only 4 in a billion of the atoms in that layer of the atmosphere are sodium.  When these sodium atoms get energetically excited, they can relax back to their original state by releasing some energy in the form of light.

Quantum mechanics predicts the light won’t be white light (that is light comprising many different colors or frequencies) but sharp lines, single frequencies.  The marked lines on the top in the photo are reference lines from a flame test of sodium (Na) and lithium (Li) solutions. (If you’ve ever splashed salty water onto a gas burner, you’ve seen these spectral lines for sodium, the bright orange-yellow flash.) The line at 5892 Angstroms is the yellow sodium D-line (actually two lines that are so close together they aren’t resolved in this photo), the green line at 5577 is from excited oxygen atoms.  Long before anyone reached these altitudes, these ghostly lines could tell us something of the elemental make up of the atmosphere.

Where did these traces of sodium come from? Before I can tell you that story, I have to tell you another one.

My interest in the sodium atoms can be traced back to a photo from a 1938 conference posted to Twitter last Christmas by @curiouswavefn, trying to identify the one woman attendee.  Just like the more recent story of @mycandacejean’s search for the identity of an unknown woman in a conference photograph (see the New York Times) Twitter was able to identify the woman. She turned out to be (not Marie Curie or Mrs. Einstein as some tweeters suggested) but Dr. Carol Anger Rieke, a Harvard trained astrophysicist.

Not long after that photograph was taken, Rieke would move to the University of Chicago, where she would do foundational work in my field of computational chemistry (with Robert Mullikan, who would win the Nobel Prize in chemistry in 1966). But while there she continued to contribute to the astrophysics literature with James Franck (another Nobelist, who had just moved to Chicago from Germany) with this short communication:  A Note on the Explanation of the D-lines in the Spectrum of the Night Sky.

Rieke and Franck write that the source of the sodium atoms in these recently (1929) identified lines was thought to be salt kicked up into the atmosphere by sea spray.  We now know that these high-altitude metals are have an extraterrestrial origin, deposited there when meteors ablate, burn off.  Small amounts of sodium are found in ordinary chondrites, something less than one percent.  As metals go, sodium evaporates pretty easily, and so is released high in the atmosphere.

In tracking down the source of the atmospheric sodium, I ran across another paper, which uses methodology I developed as part of my doctoral work, that can be fundamentally traced back to Rieke’s work with Mulliken.  It felt a bit like coming full circle for both me and for Carol Rieke.

___________
More about Rieke and two other remarkable women of the atomic era who were not Marie Curie — or either of the two Mrs. Einsteins — can be found in an essay I wrote, Atomic Women, which appeared this month in Nature Chemistry.