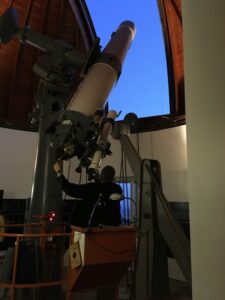 David Brown, SJ observing the planets at the Specola in Castelgandolfo

[A version of this appeared at CatholicPhilly.com in July 2010.]

On Friday, I walked onto the driveway to call the cat in for the night, peering under her favorite bushes, warmed by the brick wall of the house. I happened to look up. There, on a velvety deep cobalt sky, perfectly framed between two towering trees across the street, was a brilliant Venus and a slim crescent of the moon. The sight took my breath away, so much so that after a moment, I went back inside and pulled my husband out of bed to come see.

As I sat on the driveway, watching the moon inexorably slip away, I remembered an evening sitting on a bench outside the Jesuit retreat house on Eastern Point in Massachusetts. The bench faced east, not west, so instead of watching the fiery exuberant swirls of red and gold over Gloucester bay, my view was one of an impending darkness extending further than I could see. The blue of the clear sky slowly deepened, the stars came into focus.

The sense of being intentionally and inexorably turned away from the sun to look into the depths of the universe was strong. It was as I could feel earth spinning in space, the planet’s face — and ours — turned once a day toward the vastness of space. We look out into the universe each night whether we wish it or not.

It reminded me of my youngest child. When he was a toddler and wanted to be certain of my full attention he would take my face in both his hands and turn it toward his. Does God turn us to face the immense once each day so that we will have to look into the depths of eternity? Does he want to be assured of my full attention? What does He want me to see? to hear?

Suddenly the sunset felt like a distractingly noisy party, the rise of the night, like slipping out the door into a quiet and still street, where you can hear the cicadas and the breeze in the trees. I thought of a line from Robert Alter’s starkly powerful translation of the psalms: By day the Lord ordains His kindness and by night His song is with me — prayer to the God of my life. [Ps 42:9] In his commentary Alter notes that while this verset is often read as our response to God for His goodness, our song to Him in the night, the Hebrew implies that God also sings to us in the night. What do I hear in the quiet streets of night, where God sings to me?

In the stars whose light is so strong we can see it at inconceivable distances, I hear of my powerlessness and God’s strength. No light that I can kindle will ever compare. There is a taste of eternity in these photons first sent streaking across the universe years ago that touch me only now. As it was in the beginning, is now and ever now shall be. I feel God’s timeless hands on my face. God seeking me out.

I hear, too, an invitation to dig deeper into the tangible universe that presents itself, to think about everything from the Venusian atmosphere to the optic nerve that insinuates itself into my brain to the evolution of the stars I can barely glimpse on this overlit urban street. I hear God hoping I will find these mysteries drawing me deeper into the ultimate Mystery.

The science doesn’t impede or distract. There is more than one way to understand the universe. As Pope Francis put it last week in an audience with the young astronomers from the Vatican Observatory Summer School

“To know the universe, at least in part; to know what we know and what we don’t know, and how we can go about learning more; this is the task of the scientist. There is another way of seeing things, that of metaphysics, which acknowledges the First Cause of everything, hidden from tools of measurement. Then there is still another way of seeing things, through the eyes of faith, which accepts God’s self-disclosure. Harmonizing these different levels of knowledge leads us to understanding, and understanding – we hope – will make us open to wisdom.”

In these warm summer days (or cold winter nights depending on your latitude!) look up at the stars, out into the vastness of the universe. What is God singing of to you?